I sort of feel like ranting a little, but am too tired from lack of sleep, so I’ll just state the obvious.  The service industry in the United States sucks.  Pretty much straight across the board.

And it’s not just limited to the people who are supposed to be able to fix our automobiles, electronics, or homes.  It is just about everyone.  I’m not sure if it is because of lack of education or just that stuff is way too complicated to be fixed, but whatever the reason, it is a fact.

This is the probably 70% of the reason that I learned to fix things myself.  I got sick and tired of getting back, whatever was supposed to be repaired, and it worked worse than it did when I took it in.   I figure that attempting to fix something that I know nothing about isn’t that big of a risk considering the high chances it not being fixed by someone who claims to be knowledgeable. It is the reason we live in such a disposable society.

I know that medical care/dentistry/insurance is not really part of the service industry, but it is sort of what got me thinking about this whole thing.

When I fell and broke my hip, I bit my lip and put a gash in it.   That was nearly 5 months ago.  I’ve had this thing in my mouth, some scare tissue or swollen gland, that I just keep biting.  When I saw my dentist, who is great, up in Winona, he told me that it wouldn’t get better on its own and I needed it cut out.

So yesterday, I had an appointment to go to an oral surgeon and get it removed.  It wasn’t such a big deal, but the whole thing went badly.  First, they couldn’t get a hold of my insurance  to figure out if it was covered.  They finally got through to them and my insurance told them that they didn’t have an record of me.  Then the called back and said that I didn’t have an dental insurance.

I had explained to the oral surgery people that I didn’t think it was a dental problem, it seemed more like a tissue deal.  They agreed, but said that they only had dental billing codes.  They don’t have normal medical billing codes that they could submit.  I thought that was strange.  They said that when they send the tissue in for a biopsy, that maybe they will put on the regular billing code and not a dental code.  Maybe?

Anyway, the oral surgeon seemed competent.  It took about 20 minutes and he was sort of training a new assistant.  I was getting my lip yanked around like crazy, they were having a hard time keeping hold of it because it was so slick.  They kept using more and more gauze so they could get a good grip on it.

So, they cut out the gland and some surround tissue and then stitched it up.  It only took three stitches and felt okay because it was numb.

I paid them the $355 and left.  The stitches were supposed to dissolve on their own.  Little did I know that they would be gone almost instantly.  By the time I went t the pharmacy to get a prescription filled, I could taste blood in my mouth.  When I got back out to my car, I looked in the rear view mirror and saw that the bottom half was open and was bleeding.   It was just a little over an hour since it had been done.

So I just drove back over there, but no luck, there wasn’t anyone there but 2 receptionists and one assistant.  All the doctors had left and it was hardly 3. They looked in my chart and said there were three stitches.   I told them that there were only two left.  I thought they would call the oral surgeon and ask him what they should do, but no.

The dental assistant came back with a plastic bag full of gauze and told me to keep applying pressure until the bleeding stopped.   They were pretty much heading out the door and I realized that was all the service I was going to receive.

I was thinking I wasn’t looking forward to going back this morning and getting it put back in.  Then, a couple hours later, I felt this small piece of thread in my mouth and there was another stitch.  And just a bit later, the third one came out.  So, I had a big hole in my inside lip.

This morning I got a call from the receptionist.  She told me they consulted with the doctor and he said that as long as it wasn’t bleeding, it should be fine.  I told her that all the stitches were gone and she said they could schedule me for an appointment, but it should heal fine.

Maybe all the receptionists there have went to dental school too, but I very much doubt it.  I’m not sure where she got the knowledge she passed on to me.  If it’s true, then I’m sort of unsure why he even put in stitches to start with.

Now I’m thinking about whether I should have just taken some sutures and re-stitched  it back up myself. I sort of have this “rule” that I don’t do any stitches above the shoulders.   But when I start having more confidence in my ability to stitch up my mouth than going back to an oral surgeon, something is wrong with the scenario from the start.

I’m having a hard time convincing myself that I don’t want to go back in, but I have don’t have much confidence in the place either, so it’s a catch 22.

Anyway, I didn’t sleep much last night, as I wrote earlier.  I have physical therapy for my hip at 10:15 and don’t really feel much like going.  It’s gonna be one of those days I think. 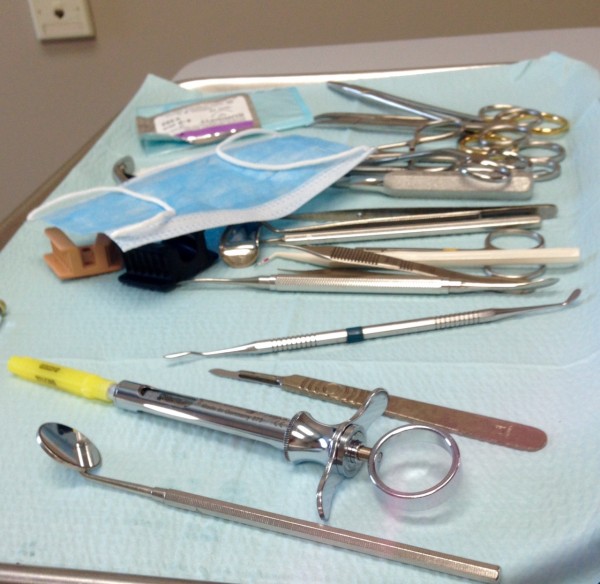 I don’t have all this stuff, but I do have some sutures that would work. 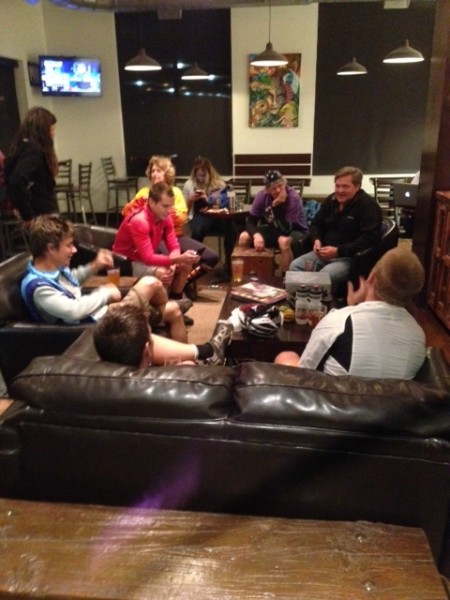 On Tuesdays, the group meets at PT after the ride to have a beer. It worked out great yesterday because of the Royals playoff game was going on simultaneously.

26 thoughts on “Our Service Industry Sucks”