I’m in a little bit of a rush. I’m headed out to ride up to Bonsall, which 45 miles Northeast, and meet up with Wayne and Dale Stetina, Pete Penseyres and a few other guys. Their ride is leaving at 9 am, but I couldn’t get up there by then and am sort of adverse to driving to ride, so I’m going to head up there and ride backwards and hopefully meet up with them. Wayne and Dale are riding a tandem, which could be a nightmare for the guys they are riding with. That is some serious horsepower if all the stars were aligned. I haven’t seen Dale since his head injury, but it seems he is doing pretty good to be able to ride a bicycle. Dale is out here to do a Ride for Recovery event from Palo Alto to Santa Monica next week. Wayne says they are riding a 23 pound Landshark tandem. Pretty cool.

I got a notification that I “lost” a Kom on Strava to Christian Vande Velde from 2011. So I go and click on Strava and there it is. I was at the front through Rosie’s that year, but didn’t have a Garmin on. I guess Christian wasn’t supposed to be using Strava when he rode for Garmin, so he just downloaded all his files recently. Another weird thing is that when I just went to look now, Brian Matter is listed too. That means he just downloaded 2011 to Strava. Kind of strange.

I only rode a little over 60 miles yesterday and sort of melted in the heat. It was close to 90 degrees inland and that seemed pretty incredible hot compared to what I’ve been riding in recently. I still don’t quite understand it. Hopefully, it is a little cooler inland today. Okay, got to go. 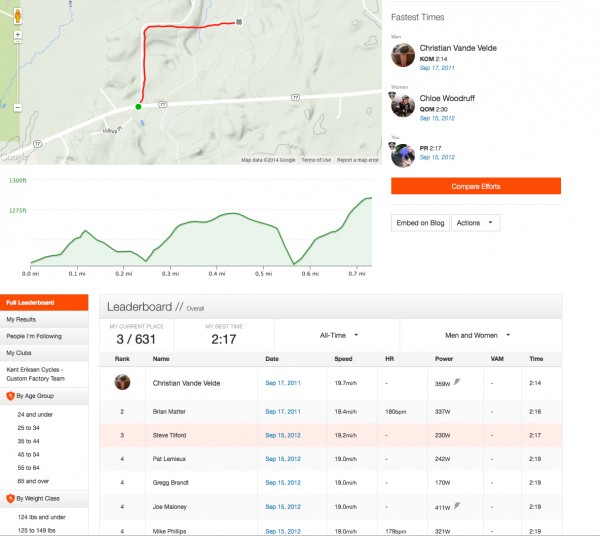 16 thoughts on “Riding in North County”