The Chequamegon 40 MTB Race has been a mainstay of the fall, for me, for the last 17 years or so. I’ve won the race a few times, been 2nd a few times, 3rd a few times, etc. This year, that wasn’t going to be the case. I am actually so lucky that I could even start the race. It wouldn’t have been possible even just 2 weeks ago.

I’d like to state here initially, I had a pretty good race. I might have been able to finish 2 places better, but I was jacked at the finish and was lucky to finish 16th.

I was completely unable to predict how I was going to ride. I hadn’t ridden hard for just about 3 months and my left leg is still over an inch smaller than my right.

The key to me being able to “compete” for a bit was due to 3 reasons. One, the weather change taking the section of Birkie Trail from Mosquito Brook to OO out, allowed me to ride with the front group. Two, I got a little lucky with my tactics, which was to go the front and pull for the first 20 minutes, just until we hit Phipps Fire Lane. And third, there was a new little singletrack section, to avoid some mud puddles, and that split our huge group down to 17 riders, which is just about where I finished.

The race started casually. I wasn’t sure whether I was going to be able to stay with the leaders on the pavement before Rosie’s Field. But, it was pretty easy and I hit the field kind of far back for me, maybe 10-15th, but rode back up to the front in the next 100 meters of grass. Brian Matter was nice enough to let slot in front of him, in 2nd. When I hit the Birkie Trail, I had decided if I got there, I’d just go to the front and pull. I can’t really change speed with any positive result and knew if I was back in line on the hills, I would eventually be shelled because of the slinky effect.

So, these guys just let me pull, which I did all the way to Phipps Fire lane. When we got to Phipps, there might have initially been only about 20 riders. But, there were a lot of guys not very far back. Bill had fallen somewhere, avoiding a rider in a mud puddle and came back on with the Eppen tandem. Pretty soon, we weren’t really racing and a huge group of maybe 60 guys were cruising along Phipps. I talked to Kim Eppen a little, telling her that it would be to their advantage to go to the front and just drill it.

They did a couple big surges on the downhills, but there were so many riders, they really never could establish a gap. Coming off Phipps, we missed the next section of Birkie Trail too, and rode directly onto Janet Road. Bill took off with a group of 3, right before we turned off to Martell’s Pot Holes, where the new singletrack section is. I slotted in a little ways back, maybe 8th or so, and just rested. When we emerged from that section, there were only 17 guys left.

And in that group were me, Bill and Pat Lemieux, who is a good friend hanging with us at Dennis’. Pat has been travelling the world with his fiance, Gwen Jorgensen, so is in pitiful shape, for him. He was just about as thrilled as me still being in the mix.

So we had about 10 miles to where the “real race” begins, the Seely Firetower Climb. I tried my best to roll off the front multiple times. I was mildly amazed, and it was a compliment, the guys chasing me down. I was completely done at that point and knew I needed at least a 30 second led at the bottom to have a chance of being connected at the top of the climb.

It was all about survival, I wasn’t racing, just surviving. But, I didn’t survive. I led through a singletrack section, one climb before the Firetower Climb. But, I got shuffled back for the last little climb. We started up the climb and I was right behind Bill, maybe 8 riders back. Then the guy in front of Bill missed a line around a mud puddle and shot off the course with Bill. I had to grab a big handful of brake, so had to sprint back up to their wheel.

Then at the next puddle, Bill’s front wheel just went out from under him and he fell, for the 2nd time. I didn’t come close to hitting him, but had to come to a complete stop. That was all she wrote for me. One guy went by me and I was on the rivet trying to stay with him to the bottom of the Firetower. When we turned the corner, the tailend of the led group was just 30 meters ahead or so. My guy rode back up to the front, but, I was done.

I crawled up the climb, arms cramping, and when I got to the top, only Ian Stanford, a friend that won the Master’s National TT Championships a couple weeks ago, was there. Hollywood was at the top and handed me a micro coke, which I got half down between breaths. I knew if I could get past the last Birkie Trail section with Ian, he’d be a good guy to pull me to Telemark. We crawled the 2 miles of Birkie section. Ian was climbing, spinning, on his seat. I was riding 50 rpm’s, off my seat, arms still cramping. We got to the last road section, which is about 6 miles long. Ian and I switched off pulling, both not going too good. I asked Ian, right before Telemark, if he could see anyone behind us. He said it was all clear.

We had 2 miles to go, with 3 or 4 short climbs. I never looked back, which in hindsight, was an error. With two hills to go, I hear Ian say “shit”. Right then 4 guys blow by me. Another two in tow. I was thinking, great, there goes 5 places. I jumped, but I was done. I caught up with the front three and climbed the to the top of Telemark a few bike lengths back. I passed one guy and coasted pretty good down the descent. He passed me again and I caught back up through the sweeper. I beat him, going around the last corner doing about 4 mph/40 rpm’s. 16th. It was a harsh way to finish that race.

I was completely done. Bill rolled in a couple minutes back, in 24th and Pat finish 32nd. Not too back. Pat and I nearly maximized our abilities. Bill probably could have done better.

My hip was good most of the day. Actually, other than the muscle not really working, it didn’t bug me hardly at all. But, Saturday night, I was crippled, my hip throbbing. I think that had more to do with the wood splitting session than riding. I took 4 ibuprofen before I went to bed and woke up on Sunday feeling fine, which was a huge surprise.

I called Brian and Gina winning their respective races, pre-race. They both have this race down and there wasn’t anyone here that could have beaten them on Saturday. Congratulations to both.

We’ve been doing a ton of fun stuff the last two days. Lots of wood splitting, wood fired saunas, river plunges, singletrack riding. I feel pretty good about where I’m at in this hip recover, 13 weeks in. I need to do some more PT stuff, but this was a good weekend.

We’re picking Trudi up at the Duluth Airport later this afternoon. I’ve told Bromont it is going to be a special day for him. He might need a rest day, as I do too. 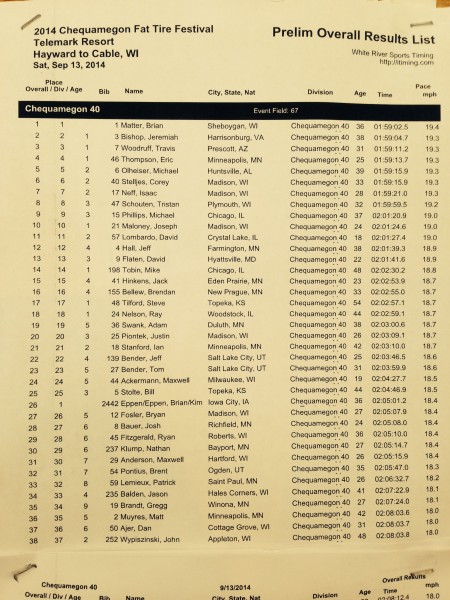 Prelim Results. Guess there was an extra guy in there somewhere. Click to enlarge. 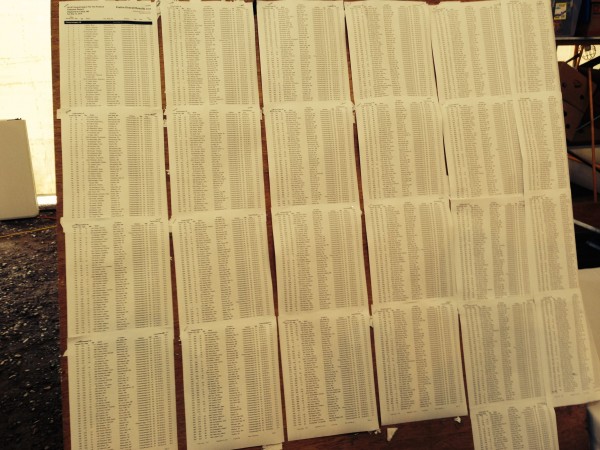 There are lots of people riding this event. 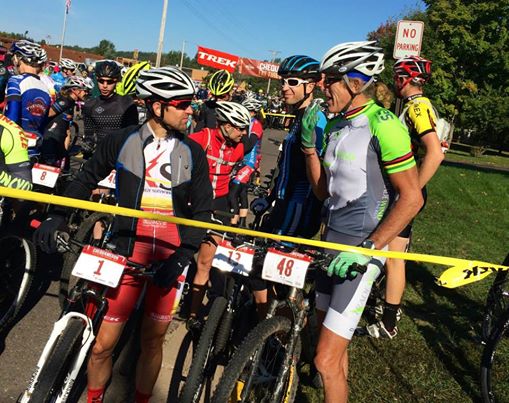 Brian Matter, the winner, and me, at the start. 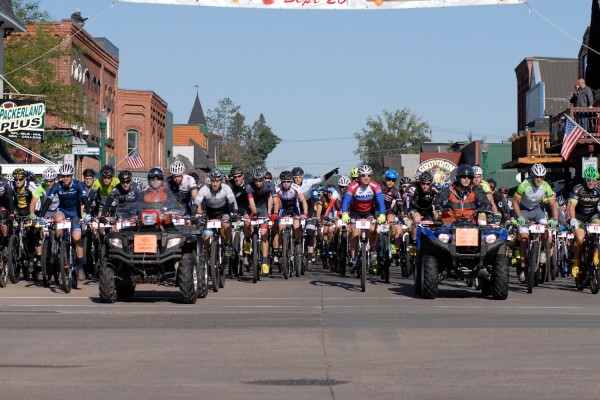 The start is always fun. 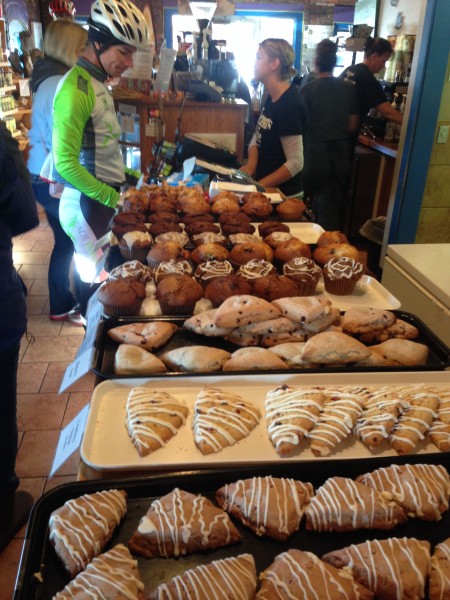 The coffeshop was well stocked before the race. 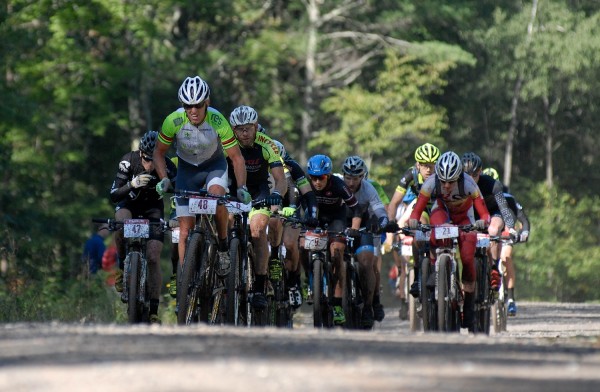 This was how I rode pretty much I rode until I “dropped” myself. You can see how stressed everyone else is, hardly. 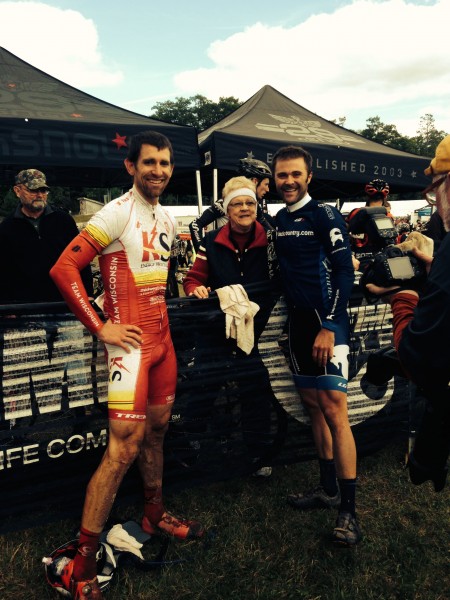 Brian Matter and T.J. Woodruff, 1st and 3rd, after the race. 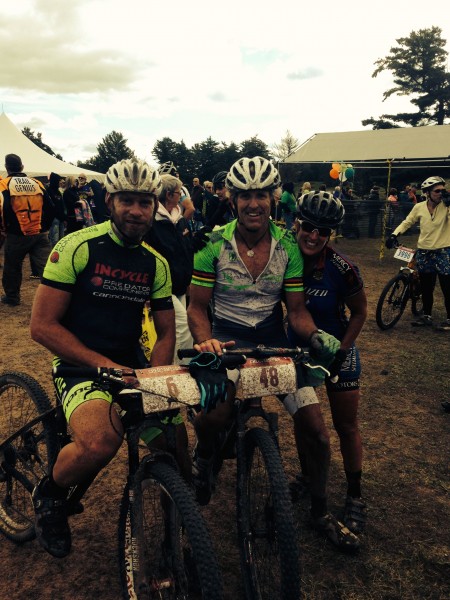 Micheal Olheiser, me and Kim Eppen at the finish. It is pretty cool, the camaraderie at the end of a MTB race.