Yesterday Bill and I rode the complete Chequamegon course. The sections from Hayward to past Mosquito Brook were officially closed, but I figured that I was there on an official capacity, so the sign didn’t apply to us. It turns out that it is in way better shape than everyone around here has led me to believe. Chris Campbell and the trail guys have obviously spent a ton of time out there, by the amount of sawdust on the grass, and there really are only a couple trees across the trail that need to be removed by “real tree guys”.

There are also just a couple ponds on the course. Two that will be a problem. But when we got up to Telemark and gave Gary Crandall the trail report, he said they were going to be cutting alternate routes around the ponds.

The soil here does drain amazingly well. It is supposed to be raining the next two days, but I doubt that is going to be changing much out there. That is as long as they don’t get those crazy straight-line winds that caused the initial damage.

One thing to note is that the whole trail is significantly bumpier than in previous years. If you have a chance, you need to put on some tires that you can ride with low pressure. I’d suggest 20 psi or less for the average Chequamegon-ite. Bill has 2.25 Continentals on and was riding 18 psi. He rolled his rear tire over a couple times, but didn’t flat.

The 2nd half of the trail from OO to the finish is in good shape. They have been logging a fair amount from the top of the Firetower to the finish, so the roads have been graded a ton. I’m sure they will leave the roads in as best shape they can by Friday. Right now they have brought it a few truck loads of gravel to fill in the soft, muddy spots.

I’m totally up in the air about how I’m going to do. I can ride the race, but not sure about actually racing. We rode the course yesterday in about 2:40. It is a little different than in previous years. They cut a bit of the 2nd section of Birkie Trail out. A couple days ago, first day off-road, I rode up the Firetower climb in 3:04, which was 41 seconds off Brian Matter’s Strava KOM. My fastest time is 2:27. But yesterday, I rode up the hill in 2:32. That is just 5 seconds slower than the fastest I’ve ever climbed the hill, with a Garmin. And I wasn’t going full-on. That makes me feel much better about my ability. I know I won’t be able to ride with the leaders, but maybe better than I’d hoped. We’ll see.

Changing the subject, Jimmy Mac is getting inducted into the Mountain Bike Hall of Fame tonight, in Las Vegas, at Interbike. He asked me to introduce him, but I’ve been traveling way too much and couldn’t see going to Interbike. There is way too much walking in Las Vegas for a gimpy guy like me. If I could walk better, then, for sure, I would have went. Anyway, if you’re out at Interbike, you should go by the induction ceremony. It is at Ballroom L, at the Mandalay Bay Hotel. There will be complementary beer and begins at 5:30pm. The induction ceremony will run from 6:15-7:30pm. Guess it’s been raining a ton there too.

Back to Northern Wisconsin. It is cold and rainy here today. Supposed to be that way until the weekend. The start temperature for the race is going to be cool/cold. I just passed 9000 miles for the year. That is missing pretty much all January and most of June and July. I’m starting to feel better riding. I think the weights I’ve been doing for my abductors are helping. I’ve been lake swimming the last couple days. Frog-kicking is good for my hip, I think. And the crawl stroke is good for my shoulder, so I guess I’m going to have to be swimming way more this fall. I’m not much into swimming, but that is just too bad.

Lots of people are showing up here soon. There are going to be at least 12 staying here, maybe more, you never know. Maybe it’s time we build another building here at Dennis’ compound. 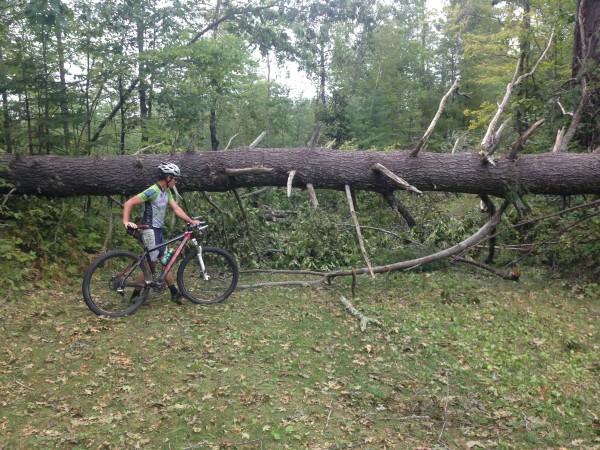 Almost the only tree left across the course. They are hiring professionals to remove this. 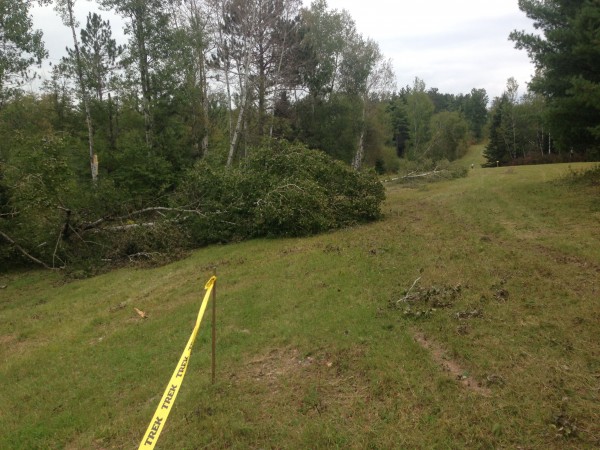 Rosie’s field. The damage is apparent about everywhere. 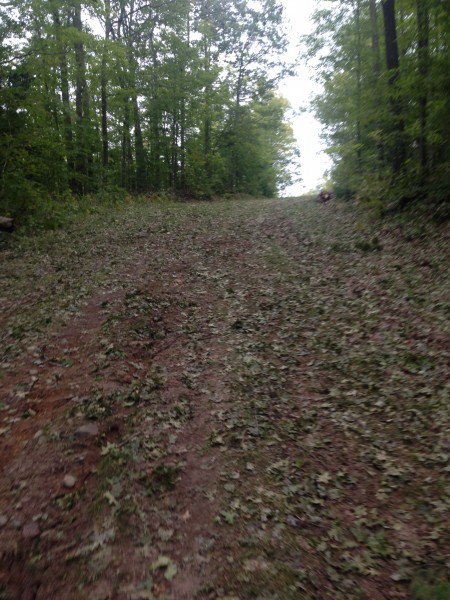 There are tons of leaves on the first section of Birkie trail. 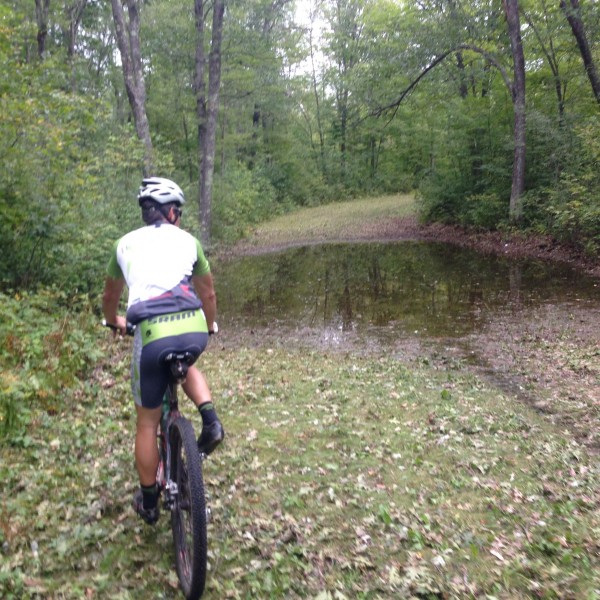 And a couple of these water puddles. 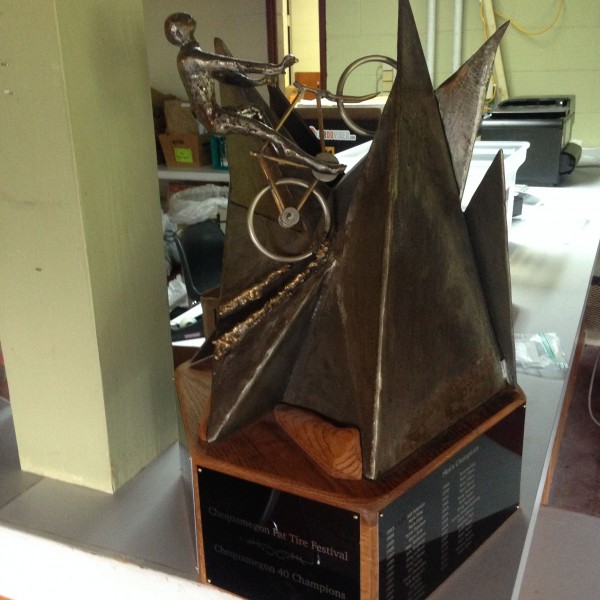 This is what we’re racing for on Saturday. 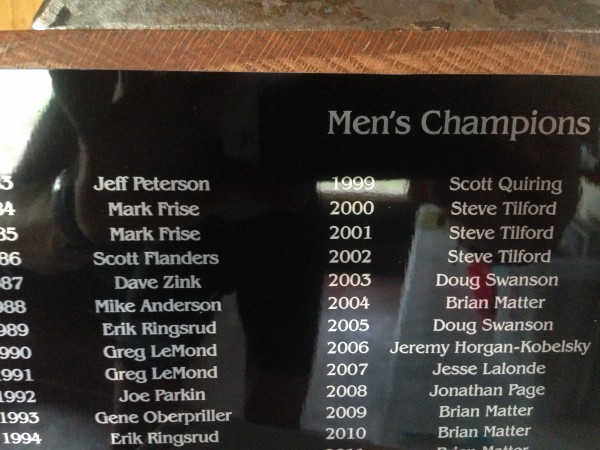 Some of the previous winners. 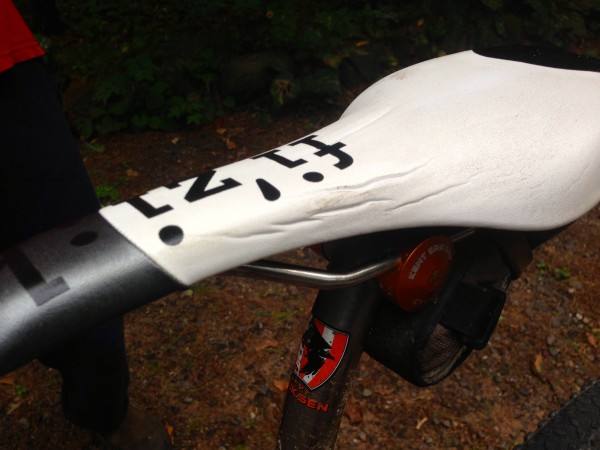 I’ve ridden this seat exactly 3 times. It seems like a seat that they sell for this much would be better than this. I have the exact same seat on my road bike and have the same issue.