I’m a little timid about going real fast downhill here in the mountains right now. I’m about 1000% better than I was even a couple weeks ago. I was a little worried that I had lost my shit, but I’m pretty sure that isn’t the case now.

That being the said, I have to say that the braking over the years has changed a ton. And it has mainly changed for the worse. Racing in big groups, with descents, the lack of braking and the fright in the field, is sometimes a little contagious. So, it’s sort of a additive scare.

I think the braking got a lot worse when Shimano went from 8 speed to 9 speed. The brake calipers themselves were slimmed down for weight purposes, making them much more flexie than before. It was hard getting a good amount of front brake, scrubbing speed quickly. It was so bad, I took off my front 9-sp caliper and used an 8-sp one for Redlands.

The 10 zip calipers were about the same, pretty squishy. Added to that is that carbon rims became common. Carbon makes the braking very unreliable. It really depends upon what brake caliper you’re using, brake pad compound, ambient temperature, precipitation, etc.

Precipitation is a big deal here. Like Tom Boonen says here, you sort of loose some braking power when it is wet. I don’t think it is 50%. I think it is initially a lot, then when you get some of the water off the rim, it tends to grab.

The link above has a bunch of Euro road pros talking about the use of disc brakes in the peleton. I think that Peter Stetina, newphew of Shimano’s Wayne Stetina, brings up the most valid concerns. He has an inside scoop on it, plus I’m sure he’s sort of an equipment geek like his uncle. I agree, it’s going to be a while before they figure out how to get disc brakes to work in professional racing. Just the wheel change problems seem monumental. The different rotors up for each and every bike will be difficult.

The new Dura Ace brake calipers are much, much better than the previous editions. I don’t know if it’s the calipers themselves or the brake pad compound. I think it is a combination of the two. But, whatever the reason, the new brakes are better, much better than they’ve had for years. No need to put on SwissStop or cork pads. They stop pretty great, on aluminum or carbon rims.

Yesterday, I rode over to Vail and back from Silverthorne. My brakes had been grabbing before, so I cleaned my rims of any chain lube that might be there. Anyway, they weren’t working good all day. When I got back to Silverthorne, I looked at my pads and they had a bunch of rim metal embedded in them. I haven’t had that problem for a while now. I’m riding Ultergra 11 sp wheels. I think the rims are Scandium, but I”m not positive about that. Whatever the deal, I don’t much like the metal in my pads. It screws up the braking and wears the rims out much quicker. Especially changing back and forth between carbon and aluminum.

We’ve all got used to worse and worse braking through the years. I’m not sure the definitive answer to the braking issues that have come up recently in the sport. I don’t think disc brakes are the answer. And if you’re going to be racing on carbon rims, then you have to expect less predpredictability​. 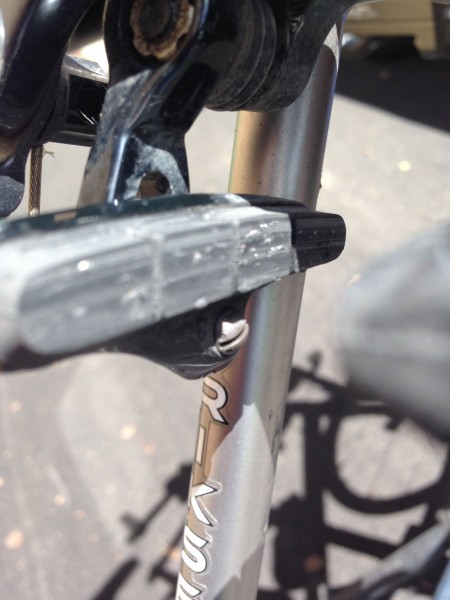 My pad after yesterday’s ride. 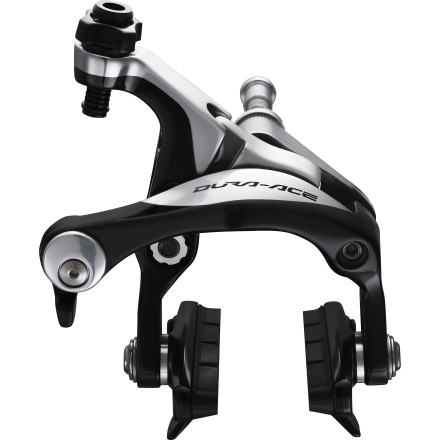 The new Dura Ace 9000 calipers are a big improvement.

15 thoughts on “Braking in the Mountains/Disc Road Brakes”