It is amazing how much activity you can fit into a long day, long day meaning starting at 4 am, which I’m not fond of at all. Yesterday I drove from Topeka to Winona Wisconsin to see Dr. David Gilmer, a dentist there. He contacted me through this website about helping me out with the front teeth problem from last week. The drive was pretty bad. Lost of rain and road construction. I actually minorly fell asleep right before Des Moines. Enough that the zizzies on the side of the road startled me, maybe more like scared me, awake. I stopped at Caribou Coffee and got a large cup.

I got up to Winona closer to 1 than to noon. But, David was on lunch break and, I swear, less than 3 minutes after I got there, he was taking x-rays and doing his thing. No paperwork, nothing. It was such a good experience. I’ve been to a fair amount of dentists in my time and this guy has to top that list. Super easy to talk to, explains everything super well and then, most importantly, is very good when his hands were in my mouth. He did lots of things that I wasn’t familiar with, like giggling my lips when injecting Novocaine. I really couldn’t tell a needle was used at all.

Anyway, the two teeth where the bridge turned out to be pretty good. He built them up and then made a temporary bridge and ordered a permanent one. Super painless and efficient. David just bought a cabin off of Blue Moon Rd., up here in Cable, so he was driving up afterward too.

I got out of Winona around 4, but there was a detour on the way up, so I had to head over to 53 and take I-94. But they were doing construction on the interstate, so it was a log jam. I didn’t really mind. I wasn’t in a hurry and I like looking around some, when I’m driving, and the slower you go, the easier it is to look. Wisconsin is a great state, super scenic. Especially down by the Winona, La Crosse area. Big bluffs and lots of corn.

Anyway, I got up to Cable around 8 pm. It was so nice. I pulled right up to the Rivers Eatery, an oven fired, handmade pizza restaurant, plus more. And it was jammed. Mick, the owner, has been bringing in live music on Wednesdays. Last night it was Molly and her Danger Band. She is from Hayward and is great. Mick “bought” my dinner, which was super generous. I haven’t been up here for a long time and I didn’t realize how much I missed it.

I hung there until Molly quit playing, said hi to a few people and got back to Dennis’ around 10. Dennis had left earlier, taking Bromont to romp in the woods. I decided to go for a night swim. The lake is a 5 minute walk from Dennis’, but I’m walking so poorly, I got a headlamp and took one of his MTB bikes. The moon was just up enough to see a little with the headlamp off. I normally wouldn’t mess with a headlamp, but can’t really afford to do a stupid fall currently.

When I got to the water, a huge something, jumped in. Maybe a beaver, probably a beaver. Hawkeye, Dennis’ dog barked and I was a little hesitant on getting in. I heard another splash, pretty close, but it wasn’t a beaver slapping its tail, something else. I was a little spooked, but intellectually convinced myself that there wasn’t anything that could be swimming around in the lake that could harm us. I waited a couple minutes, then finally took the plunge. The water is pretty warm. I was surprised. I swam out maybe 5 minutes and by then the crescent moon was rising pretty well. The water was so flat. I just treaded water for a few minutes and enjoyed. There is nothing like being alone in the middle of a calm lake, with just enough moonlight. All your senses are stimulated. Super sensitive actually. I love it.

Bromont never showed. I could see his blinky light off in the woods sometimes, but he rarely ends up in the lake when I’m there. He met up with me when I was riding back up to the compound. He was all muddy, like he’d been mucking around in a swamp. I had to hose him off.

I got some good sleep last night. 8 plus hours, when was well needed. Dennis has a bunch of projects around here that I can help with. He’s already started, so I should probably get going. 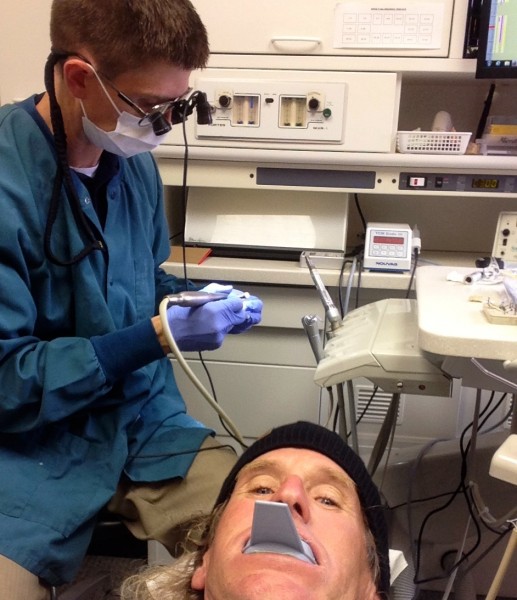 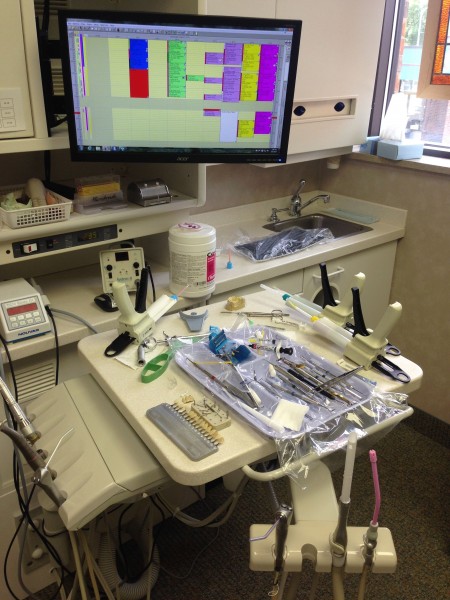 It takes a bunch of equipment to be a dentist. 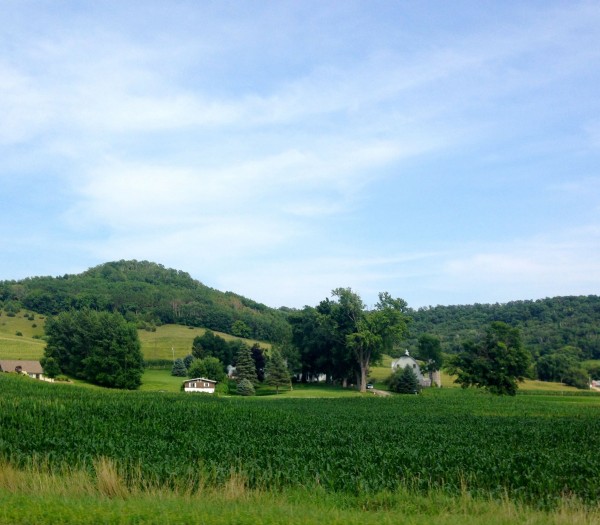 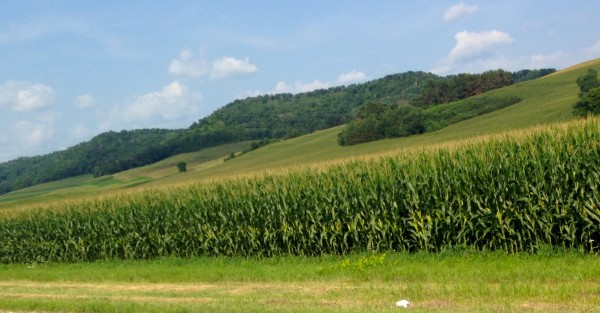 A lot of corn. 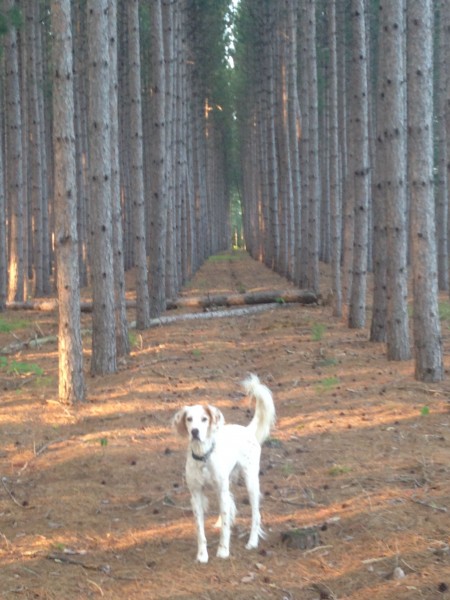 Stopping before Hayward to let Bromont out. He is such a poser. 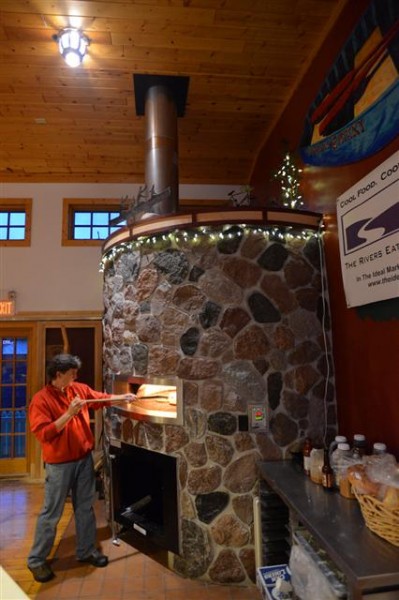 Mick putting a pizza in. 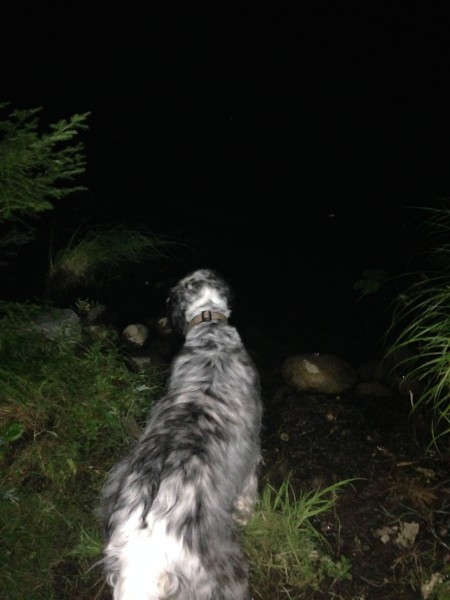 Hawkeye looking at the black water. 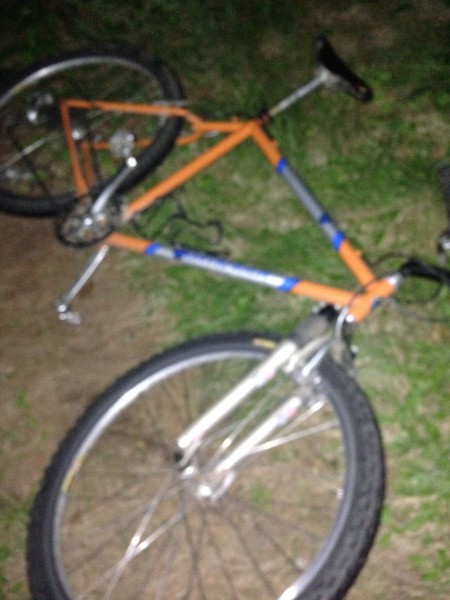 I rode Dennis’ old Bontrager MTB bike to the lake. 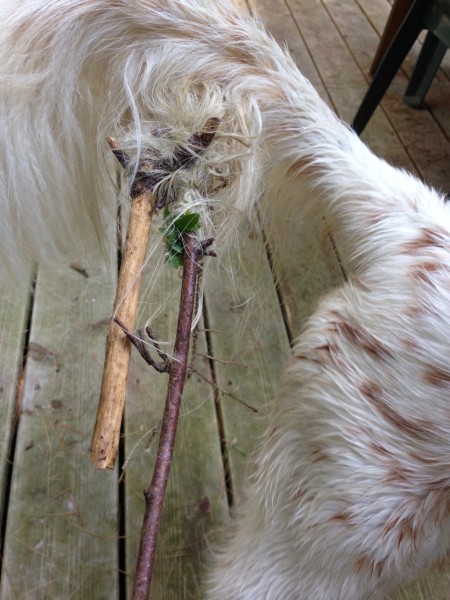 Bromont’s tail this morning. He is in dog heaven here. 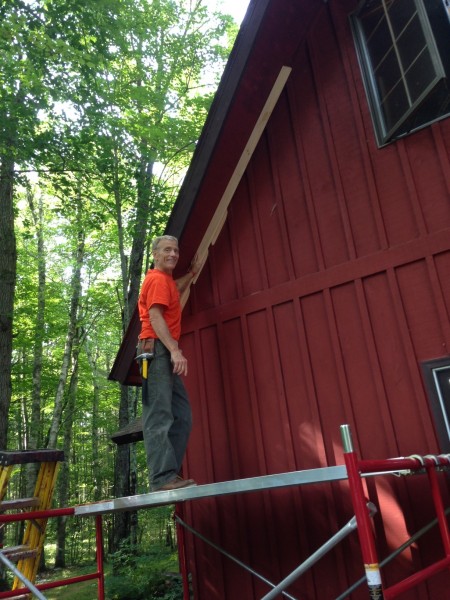 Here’s a bit of music from last night. Molly said that her dream would be getting this song she wrote used on The Game of Thrones. It is perfect.