I’ve known Kent Eriksen for a real long time now. Since 1984 actually. So that is 30 years I guess. He made the MTB bike I rode to win the first Mountain Bike National Championships in 1983, but I really didn’t know him then. Kent had started Moots and was building steel MTB bike frames. I was pretty much still racing on the road, so I really didn’t have any need for another mountain bike.

Early when I started racing mountain bikes professionally, I got a call from Wheeler Bicycles. They wanted me to ride for them and said that they had commissioned Kent to build something like 300 titanium frames for them. The sponsorship fell through, but Kent got the deal to build the two frames, so he made enough $$$ to buy the equipment necessary to build with titanium.

He started building exclusively titanium frames at Moots soon after that. One day a titanium road frame just showed up at my house. He had already built me a Moots YBB, that I had ridden to win a Master’s World MTB Championship. I rode that same bike to win 4 more times. I still have it in my garage, it is bombproof. I’ve crashed hard enough to snap off shock forks, I’ve had it disappear off cliffs, just about anything you can name that would normally destroy a bike, but it just keeps going.

Anyway, Kent sold Moots and started Kent Eriksen Cycles. I now ride Eriksen titanium frames exclusively. For cross, MTB and on the road. Frankie Andreu, who manages The Five Hour Energy Professional Team came up to me at Joe Martin and asked me, “Why in this day and age of super light carbon bikes do I ride titanium?” I told him I thought titanium was the best material for a bicycle for any off-road event, ie, cyclocross and mountain bike. So, it made sense that I just rode it on the road too. But the real reason is that the bikes ride great and don’t break. I’d ridden Trek frames for the previous three seasons and every single time I fell down, the frame would break. Someone would hit the bike with their front wheel and it was over. I went through tons of Trek frames. The frames were great, rode great, super light, no complaints. Except, they are fragile. I know that carbon is getting better and less brittle, but nothing carbon can match titanium in the bomb-proof category. I’m sick of disposable bicycles and bicycle parts. Here’s a New York Times article on the very subject if you’re interested.

I got on a tangent here. This was supposed to be more about Kent. Back on track. I really didn’t get to know Kent real well until the last decade or so. He was there when I was inducted into the MTB hall of fame. After that, I started riding his cross bikes and started interacting more and more with him.

He is pretty much a genius in a lot of ways. He comes across as really unfiltered. He tells you exactly what he thinks and gives you, probably, too many options to consider, when making just about any decision.

Kent likes to do custom work. Not only on bicycles, but in just about all aspects of his life. He built his house outside of Steamboat Springs. It is made out of Aspen trees and more resembles a tree house than just about anything else. He has a cable, like a lift at a ski resort, running along his driveway for a pedal bike that runs on the cable. He can fabricate just about anything he needs out of just about any material. You should see the titanium bike rack he made for the roof of his BMW. It is a piece of art.

Kent’s mind is running at a speed I’ve rarely witnessed. It is really hard keeping up with him because having a conversation with him, he’s already way far ahead of what is being discussed. Sometimes it seems like he doesn’t even hear what you say, but that’s not the case. He has heard what was said and has moved beyond it already usually.

Now, Kent the athlete. I really haven’t ridden that much with him. I’ve probably only ridden a total of 15 times with him. Maybe 20. Here is an example of how natural he is. He built new MTB bikes for Andy Hampsten, Roy Knickman and myself for the second MTB National Championships. He stayed up super late building the frames, drove down to Boulder the day before the race, stayed up all night assembling our bikes for the race. Then he proceeded to beat us all, finishing 4th, with no sleep the two nights before. And only using one toe clip. It was crazy.

He still desends amazing off-road. That is his thing. He rides the road some for training, but really is a MTB rider.

I think he can just really suffer. He rode the Laramie Enduro last weekend, over 6 hours, and he’d ridden maybe 500 miles for the year. And half of those were a couple months ago. Who can do that?? Not me.

Anyway, Kent is a joy to know. Guys like him is a big reason I’m still so enthused with the sport. You don’t run into these guys that often. But, in cycling, you do much more. The sport attracts it. If you ever have a chance to come through Steamboat, you should stop by the shop and see it. And say hi to Kent. He makes himself accessible to just about anyone that comes through. Pretty unique in this day and age. I like it a lot.

Here are a few photos I took yesterday. 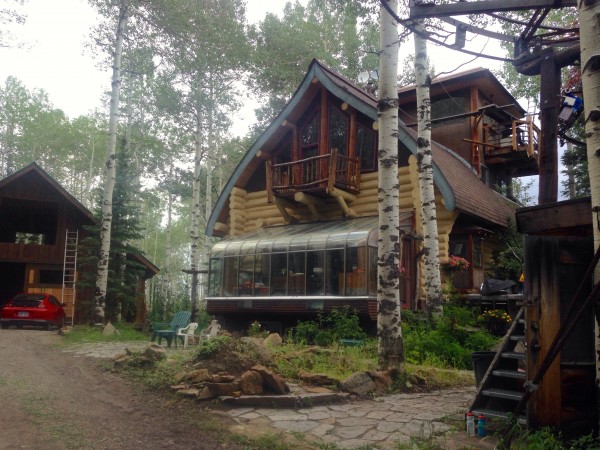 Kent and Katie’s house. It is eclectic for sure. 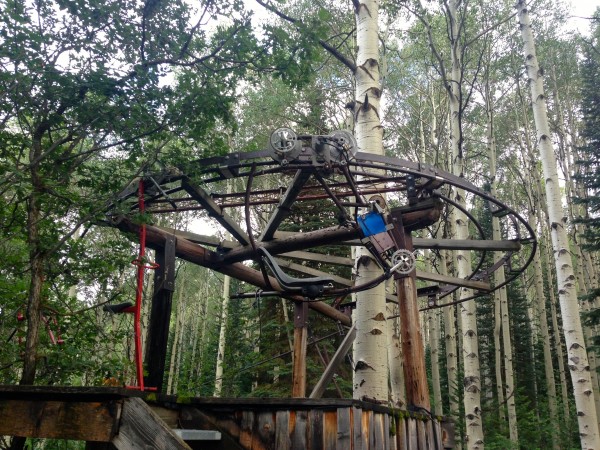 He did this in his spare time for fun. 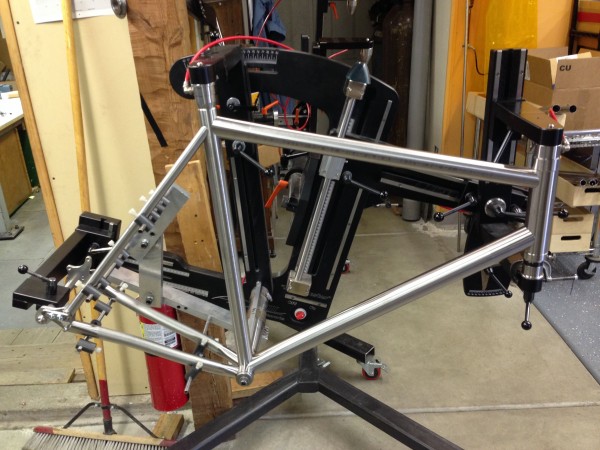 A work of art. This is going to be a belt drive bike I believe. 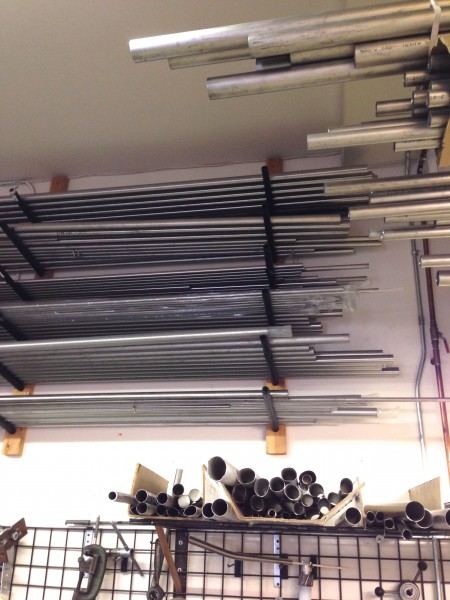 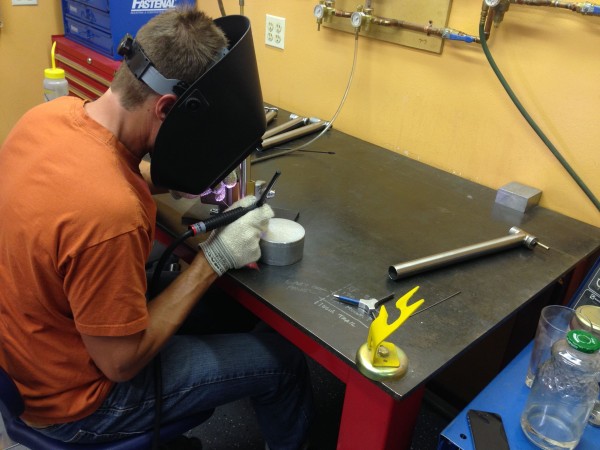 This is Brad Bingham, doing his thing, which is making perfect welds and unreal bicycles. 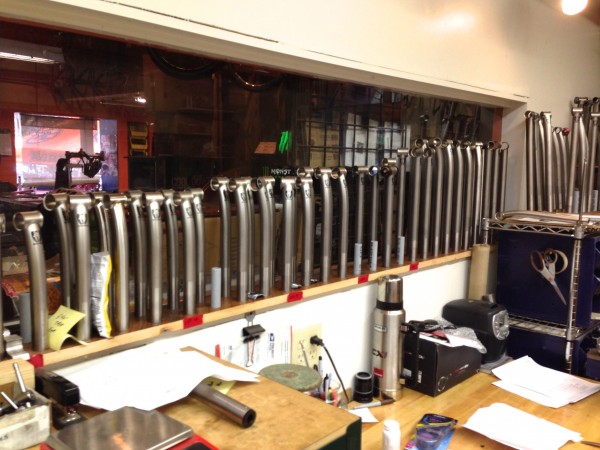 There is not a better seat post in the World than an Eriksen seatpost. None. 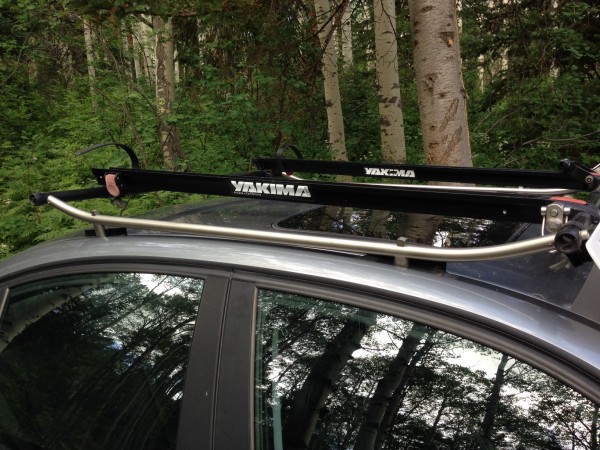 Bike rack on his BMW sedan.