I flew out to Southern California today. I got a ticket on United since I wasn’t flying with a bike. I pretty much only fly on Southwest when I can now. Even though they raised their bike charge from $50 to $75, it is the cheapest game in town. Frontier used to be even better, a bike counting as just a checked piece of luggage, but they went to the dark side recently and now even charge for carry-ons.

Anyway, when Trudi dropped me off at the Madison airport, I was a little apprehensive about getting around the airports and planes on crutches. So far, that hasn’t been a problem. I got the super fast TSA pre-approved line at security and sailed through. Sailed through until they flagged my bag. I didn’t check a bag because it is $25. The guy said he saw something metal in my bag. I told him that it was probably my bicycle pedals. (I brought my pedals along just in case I feel up to a little jaunt.) He told me no, it looked like a L. Then I remembered I brought a 8mm pedal wrench along. I told him it was inside my cycling shoes. So, he opened my bag and found the pedal wrench.

He then proceeded to put the wrench up against a ruler mounted on the machine and it measured 8 inches. He told me that it was illegal to fly with a tool that was longer than 7 inches and said I had two choices. Go back to check-in and put the tool in my checked bag or surrender it to the TSA. I told him that I didn’t check a bag and that I wasn’t up to going back down to ticketing and checking the tool. I have other pedal wrenches, but this seemed ridiculous. It was a pedal wrench. I had way more dangerous things in my carry-on. I had a small pair of scissors that I would choose as a weapon over the pedal wrench it that is what it came down to. Even my crutches, in my opinion, would be considered more dangerous than the pedal wrench.

Anyway, he asked me again if I wanted to surrender the tool. I asked if there was any other option. He said I could talk to a supervisor. I didn’t really see the point, but I asked him if there was a chance that the supervisor would let me keep the wrench. He shrugged. So, the TSA guy goes and gets his supervisor. Actually, two guys show up. He remeasured the pedal wrench and tells me that it is too long. I ask him if there is any exceptions to the seizure rules. Then, out of the blue, he asks if there is a medical reason that I would have to have it. I think about it for a second, and bing, a brilliant idea comes to me.

I tell him that I have a prescription for physical therapy and that it is for low impact resistance, such as swimming and riding a stationary bike. And that I brought my pedals along to use for that. He asks me for the prescription. The two TSA guys read over it for a little and finally say that there isn’t anything that specifically mentions riding a bike. I said that the doctor just told me that verbally, but it did say low impact exercise, which cycling is.

The supervisor didn’t say anything for a little while and finally said, something like, “I can give this back to you if you assure me that you’re not going to do something dangerous with it on the flight.” I thought that was a weird statement/question, but I told him that I would stick it on the bottom of my bag and it wouldn’t see the light of day until I landed. He then handed the pedal wrench back.

I was really surprised that is how it worked out. I thought I needed to thank the guy for using common sense and making a fair decision. So, I put my arm out and thanked him for just that, using common sense. Rarely in this day and age of “terrorism” and flying, will someone in authority, bend the rules, even if those rules seem ridiculous.

So, the flying has been good so far. Getting off the plane in Denver, my little jet had landed and I had to walk down stairs to get to the runway. Man, the stairs are too narrow for crutches. So, I just held them in one hand and hopped, one-legged down to the tarmac. That is the extent of the trouble I’ve had so far. I hope that is all. 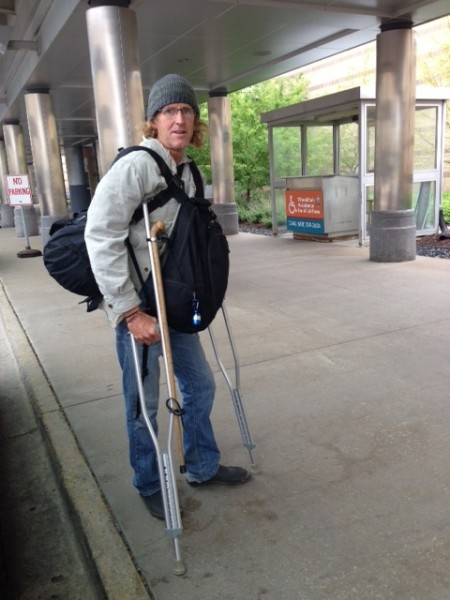 At the Madison airport. I have my walking stick toe strapped to my crutches. 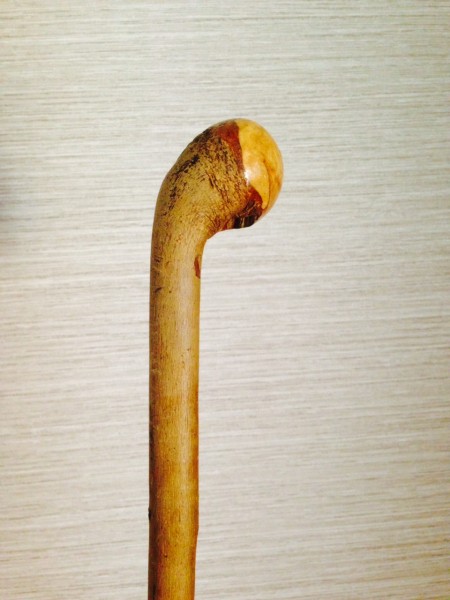 I’ve used this every time I’ve crashed and broke something below my waist. I got this walking stick/cane in England, nearly 30 years ago, after crashing in the British Milk race. 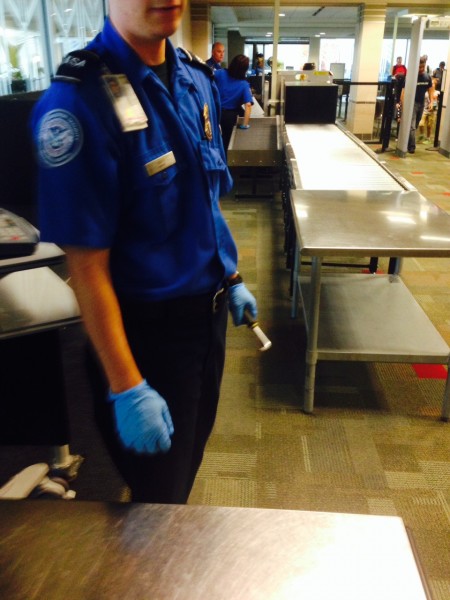 The first TSA agent just about to take my pedal wrench. 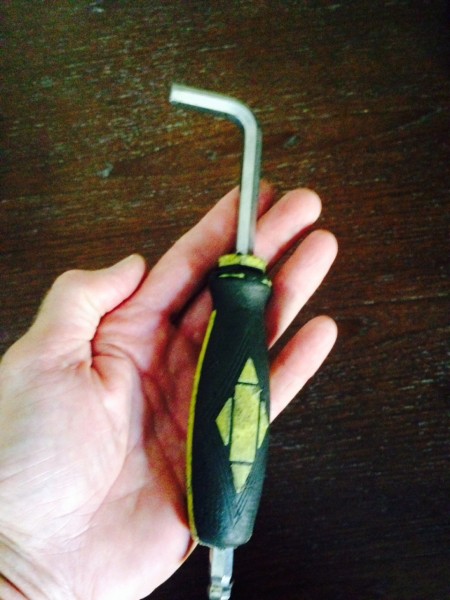 The pedal wrench. I still have it in my possession. I’m wondering if I should check my bag on the way home.

21 thoughts on “Flying on Crutches”