I was talking to a couple friends last week about different bathroom situations throughout the world and remembered this story below. I wrote it a few years ago, but there weren’t that many of you coming to my website back then, so I figure it isn’t that big of a no/no, posting it again. Here it is.

Michael Fatka told me that he was reading a book Slaying the Badger, a story about Hinault and Lemond in the ’86 Tour. Here is a review from RKP. Michael said the book starts out kind of gross with Lemond having diarrhea and using a box full of Benard Hinault postcards for something involved.

That made me think of the very first day I raced in Europe. I was on the US National Team and we were doing a PRO-Am race called the Tour de-Vaclouse. It was in the Provence area of France with a stage climbing Mount Ventoux. Anyway, Bernard Thevenet, who was on the tail end of his career, but had won the Tour de France a few years earlier, was the team leader of Peugeot. And it was all the Pros against the Russians it seemed.

I was so nervous for the start of the first stage. It was in the city center of Avignon. We rode to the start and I was so sure we weren’t going to be able to find it. Avignon has a walled city center and we were having a heck of a time finding the start square. Greg Demgen had raced in Europe a couple times and was our leader. We got to the start and I couldn’t believe how many people were there. I needed to go to the bathroom seriously. So, I rode over to a small bar and went in to find the W.C. I walked in and it was something I’ve never seen before. A small room made out of porcelain with a hole in the floor. It was a squatter. It was super dangerous wearing leather cycling shoes with metal cleats. I was having issues, trying to keep my balance and not soil my cycling shorts, but not completely slide out and end up in a pile in the corner. I was trying to use the wall as a balancing point, but my cleats on the porcelain keep slipping.

Anyway, I was so perplexed about the whole scene, that I hadn’t even noticed there wasn’t any toilet paper there. It was a nail hammered into the wall with newspaper torn into 1/4 pages stuck on the nail. I’m pretty sure that was the first time I’d used newspaper to wipe. But, I wasn’t complaining. So, I take the first sheet of newspaper off the nail and on the backside is a headshot of Bernard Hinault. I couldn’t believe it. I was going to be wiping my butt with Bernard Hinault’s face. In France. Thinking back upon it, now I would probably fold the paper up and put it in my pocket and used the next piece, but that didn’t occur to me at the time.

When I finished I pulled the chain hanging down and a huge flood of water came from everywhere and completely soaked my leather cycling shoes. When I walked back out through the bar, my shoes were leaving pools of water, and went back outside, the race had left. I was completely panicked. But, everyone watching pointed me in the right direction and every time I came to an intersection, someone would point and tell me, in French, where to go. I caught up with the back of the caravan a few kilometers out of town, just when everyone in the race, the riders, the drivers, the mechanics, were stopped, having a nature break of their own, before the real start of the race. That was pretty standard back then before all starts were on television.

I went on to race with, and against, Bernard Hinault a few years later on. I never could have imagined it that the day I used his likeness to wipe my butt.

My European cycling experience started off a little haywire that day, but it left a lifetime memory. 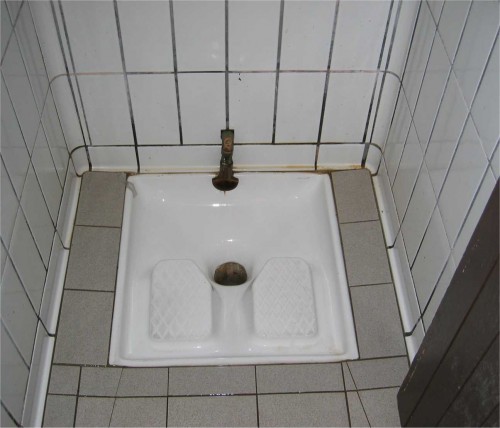 You can see how it would be a little tricky in cycling shoes. 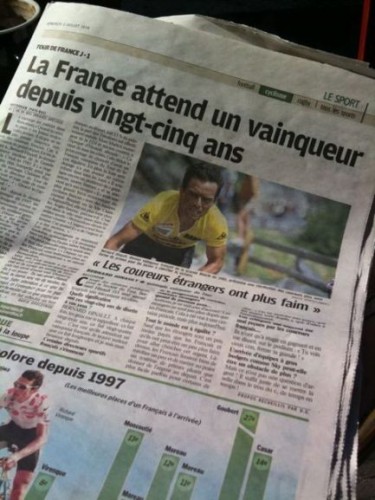