I was talking to my friend Vincent about all the comments I’ve received about maybe it is time I just hang it up, cycling that is. Obviously, the people that left those comments, or sent the emails, don’t know me very well. Anyway, it got me thinking about friends of mine that quit over the years, not just retired, but quit. And nearly everytime it happened, I didn’t really see it coming, or more honestly, didn’t believe that they meant it.

One example that comes to mind was a guy named Dave Farmer, who rode on the Coors Light team back in the 90’s. I’d known Dave since he was a junior and had raced with him for years. He was a very good bike rider and is a super nice guy.

Anyway, we were racing in the West Virgina Mountain Classic, a stage race that was sandwiched by the Pittsburg Race and Philadelphia National Road Championships. It was those three races that Lance won were he got the $1,000,000 bonus for sweeping them.

Anyway, I’m pretty sure this wasn’t that year, but it was towards the end of the race, maybe a couple days to go and I found myself off the back with Dave and another guy. I can’t remember exactly who the other rider was, I’m thinking an Eastern European guy, but I’m not sure they ever raced there. It definitely wasn’t an American, it was some guy neither Dave or I knew very well and the dude was going way too hard for our liking.

We had a ways to go and, like I said above, the guy pulling was still racing while Dave and I had pulled the plug. But, as cycling goes, drafting someone riding faster is usually easier that riding in the wind by yourself, so we were just sitting on, but not contently.

All of a sudden Dave says to me that he’s done. He says that he is quitting. I tell him not to quit and to not leave me alone with the other guy. He then proceeds to tell me that he isn’t only quitting the race, he’s quitting the sport, that he’s done racing bikes. I really didn’t take him seriously. We were not having a good day, but I just assumed that he was talking from a destroyed mental state and that it would pass.

Anyway, I was surprised that I couldn’t talk him out of getting off his bike that day. When his team car came up, he said bye and just stepped off. At the time, I was pissed at him for “abandoning me”.

And that was it, he never raced again. I am sort of surprised I never talked to Dave about why or what made him decide that day to hang it up. I’d like to now know the set of circumstances that led up to him just pulling the plug that day.

Dave didn’t disappear from the cycling scene though. ​He was dating Ruthie Matthes, MTB World Champion, at the time, so he travelled around with her to some of the Norba Nationals and World Cups.

Maybe the next season, I was racing a World Cup in Mount Snow, Vermont. Mt. Snow was a gnarly nearly, the descents were always super technical and dangerous. Always wet, rocky and lots of tree roots. I was doing pretty well that year. I was pretty good in the mucky stuff and was climbing good that day. On the 2nd or 3rd lap, I started down the most technical section of the course. It was a, off-camber, super rocky, section that was sloppy muddy. I started down it and got off line at the top. The the course was lined with spectators there. I tried to keep it up, but eventually got crossed up and was launched over my bars.

When you’re MTB racing in front of a lot of people, and fall, you can tell how bad the landing is going to be by the noise coming from the crowd. When the crash went into the slow motion, freeze frame mode I experience, I realized that it was going to be ugly because it was completely silent. I flew through the air, inverted, and hit a tree down the hill. The tree stopped my forward progression and I slid down it head first into the pile of rocks. Right when I hit the ground, my bike came down directly on top of me. I just laid there in a crumpled mess, thinking I’d broken my neck or back, or something.

I took my time getting up. I was bleeding everywhere and pretty disoriented. I think a couple spectators came onto the course and helped me up eventually. Other riders were going by me this whole time. I was quitting, but I was still up on the hill. I was staying in a condo at the bottom of the descent and the fastest way down was just riding the course. My bike was okay, so I got on and crawled down the muck. I was spooked.

The condo was about 1/2 mile before finish, in a very secluded area. I got down and stopped, then stepped over the ribbon. No one was there. I was on the back porch of my condo, which was just a couple steps from the course and I hear someone yell, “Hey Steve, what are you doing?” It was Dave. I told him that I crashed and was wasted, so I was quitting. He said that I was in 8th place and that I couldn’t quit a World Cup when I was in the top 10.

I thought about it for a second and realized he was right. I couldn’t quit a World Cup when I was in the top 10. So, I stepped back over the ribbon and told Dave thanks, then kept riding. I didn’t stay in the top 10, but I finished the race alright. And the only reason I kept going was that Dave Farmer happened to be standing there when I quit. And I respected his opinion enough to realize that what he was telling me was correct.

I have/had a personal rule that I never quit a race unless I am too hurt, or too sick to continue. I was breaking that rule and it took a knowledgeable friend to remind me of it. I was lucky Dave was there. 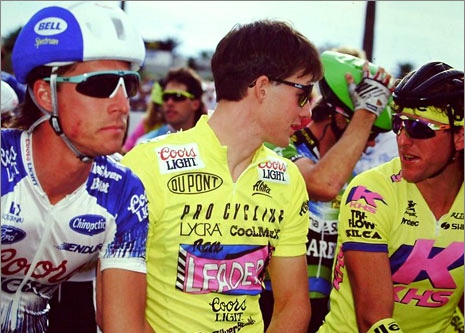 Dave Farmer and myself back in 1990. That is Chris Huber to Dave’s right.

34 thoughts on “Quitting the Sport”