A few articles came out this morning on Bradley Wiggins, 2012 Tour de France winner, won’t be racing the Tour this year with Team Sky. I haven’t been shy with my opinion of Bradley. I’ve written a couple posts on the guy in the past. I’ve never much liked his public persona. And I’ve found if a person is unlikeable in public, then they tend to be complete utterly terrible, privately.

I guess Chris Froome, plus the powers at Team Sky, realize this and have decided that even though Bradley is one of the top 5 stage racers in the World, and maybe even has the form and ability to win this year’s race, they don’t want him around. Man, that is making a pretty definite statement.

He has said some pretty weird statements over the years. Talking about Paul Kimmage being a hypocrite because he was a bad doper. Saying that he never intended to win the Tour more than once. Feeling ashamed of winning the Tour because of the previous winners. Saying that he would like to focus on winning a gold medal at the Olympics in 2016, on the track. Etc, etc.

I’ve never heard any one of Bradley’s team mates say much nice about him. And the guy has a complete potty mouth. But that isn’t enough to leave him out of the Tour, that starts in him home country, England. He obviously has made some very serious enemies on his team. His quote of “The team wants to win the Tour, that’s how it is, and they cannot have even a small issue, because that would be disastrous.” says a lot.

But, Bradley, as usual, is wrong again. He is a big issue. I think he needs to start looking for a new jersey to wear next year because his current team already knows him.

PS. If you want to read a good write-up from a “real” biker and not just this post about a multi-millionaire robot, then click here to read Dan Hugh’s personal observations of his Dirty Kanza 200 race last weekend. Dan is a 4 time winner of the DK200, so he has the most race miles on those beautiful gravel roads, through the Kansas Flints hills, than about anyone else. 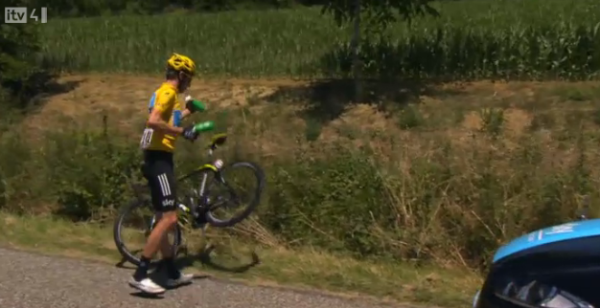 Bradley’s bike change form. Remove the bottles, then toss the 10K $$ bike into the ditch so his mechanics have more work to do later. 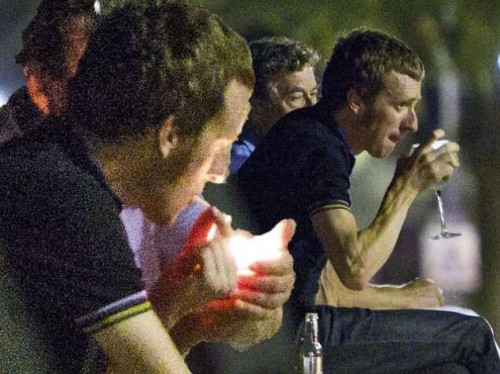 Celebrating after doubling up winning the Tour and the Olympic Games in 2012. Great role model.