I was sitting out on my front porch a few minutes ago, kind of moping around. I’ve been moving around super slowly today. Actually, it started around 2am this morning. I woke up in a cold sweat and couldn’t get back to sleep, so I just got up and started my mopey day. I didn’t stay away all night. I went back to sleep around 6 and slept again for another hour or so. So, today was never going to be stellar. I tried to post something earlier, but didn’t have the patience or the mental capacity to do it.

Anyway, I’m sick. My hip feels way better, but I’ve got a constant stomach/back ache and a on and off again headache. Plus some other symptoms. I’ve been trying to go outside a few times a day and just sit. The front porch has a good view of squirrels collecting acorns so I picked it.

I’d only been on the porch for 15 minutes, or so, and here ride up two fixtures in the city of Topeka, Ken Hackathorn and Brian Hammondtree. They have been riding their bikes around Topeka for years/decades. I think every city has a couple guys like Ken and Brian, guys that make the rounds through town and always make sure to check in at the bike shop often. Ken and Brian have probably had 50 different bikes between them over the years. They buy, upgrade, then sell bikes constantly. I don’t think either has a driver’s license, so their bikes are their only mode of transportation. Kenny has some issues and his balance isn’t good enough for a two wheel bike anymore, so he got a tricycle.

So, they see me on the porch and come on up. Kenny had brought a bag of bike parts for my brother, Kris. Ken’s trik was making a ton of noise, so I hobbled out to check it out. He has cable disc brakes and were easy to adjust. Kris got a 5 mm and it was done in a few minutes.

Anyway, Brian wanted me to autograph his new Specialized 29’r. He was saying it was an honor having someone from the Mountain Bike Hall of Fame’s signature on his bike. So, Kris went in and got a Sharpie and I signed both Brian’s bike and Ken’s.

I was pretty much done after standing in the driveway for 15 minutes, so I went in. But not before Ken told me a few jokes. He always has a constant supply of jokes. I’d tell you a few, but most, nearly all, are rated X, or at least crude. Crude, but sometimes funny.

Anyway, it was nice having those two stop by. They ride by fairly often, but I’m usually pretty busy, or just not around. It temporarily got me out of my doldrums and was a pleasant break from moping. It will probably be a highlight of the day. 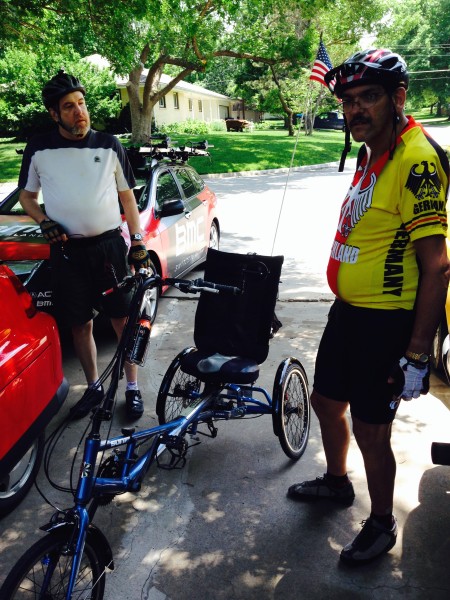 Brian on the left, then Ken or the right. 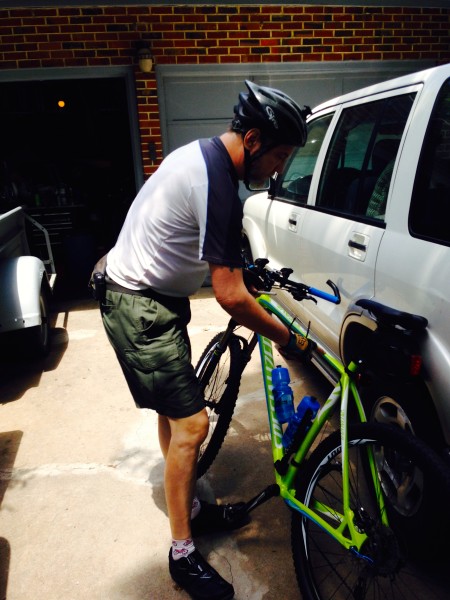 Brian showing me where he wants me to sign his new Specialized. 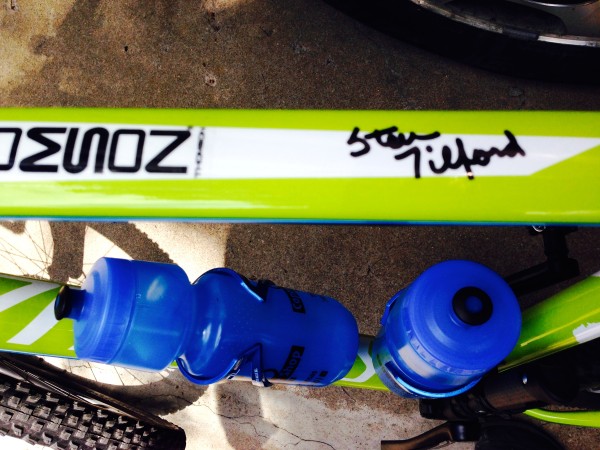