Okay, I was a flip of the coin from racing yesterday in Burlington. I checked into the hotel in Burlington and had to keep going back to the room to use the bathroom. So, I decided that I’d get on my bike when I got to the race, ride a little and decide. But, we got there only 15 minutes before registration closed and a train came through Burlington, cutting off my ride, so I did a lap up Snake Alley and felt alright, so decided to ride. If I would have known they were going to make me pin on 4 numbers, I would just trained. I hate pinning numbers. But, I’m glad I didn’t know.

The Burlington Road Race is 95 miles, up North along the river to Grandview, then a loop through town and back to Burlington. There is usually a bunch of wind which makes the race, but today it was fairly calm. We cruised a couple miles and then it was on. Like 30+ mph on. I couldn’t believe how fast all the Hincapie guys wanted to start. They were attacking each other when we were already going pretty quick. It finally calmed down and seemed sort of under control.

But, this race is very unpredictable. Really unpredictable when there isn’t much wind. I was going to just try to sit in and try to get the free miles a big field allows. It was nearly perfect. My stomach keep swirling alittle, but nothing terrible. I tried to keep eating, but I definitely didn’t have enough water for 95 miles, even though it wasn’t even 80 degrees.

Finally about 5 miles from the turn around, a huge group rolled off the front. It was to be expected, but kind of depressing. It seems like a lot of guys at the front of the field were stoked to have 2 guys out of 20. The problem with that is that they had 8 guys out of 80, so the same percentage. The only glitch happened just a couple miles later. A couple Hincapie kids took off up the only real hill in the race, and Chris Winn, Horizon, latched onto them. I jumped kind of late and was riding up to them, but when I shifted in the back, dropping it from a 19 to a 17, my chain shifted into the small ring. I lost all my momentum and just crawled up the hill after that. I need to figure that problem out, it happens pretty infrequently, but even once is too many times. It turned out to be a good thing, because I didn’t want to ride that hard really. Chris came off and it took the two Hincapie guys a long time to catch on to the front. I didn’t have any intention of doing that sort of effort.

Our huge group keep losing time to the turn around and finally a couple teams, mainly the Grand Performance team from Minneapolis, got their guys up to the front and organized a chase. But, they were under powered. I’d already bet John Puffer, a DQ Blizzard (inside joke), that we were going to catch them. We got to maybe 20 seconds before the chase fell apart. I was a little disappointed, but it is okay. We finally just pulled the plug and called it.

But, a few guys kept attacking. Cole House got behind the officials moto with a couple other riders and rode away. Then a bigger group, with my team mate Bill Stole, rolled away. There were maybe 8 of them. There were 19 riders in the break, so only 6 paying places left. And Bill’s group had those.

We really slowed down, but finally got sort of going again. It seemed that no one really wanted to ride the 40 miles back in two hours. A couple guys took amazingly long pulls, like for miles at 27+ mph. There was a little tailwind.

We never saw any one from in front again. I guess that 3 Hincapie guys broke away from the break and won. It kind of surprised me because there were a few good guys up there. Anyway, I don’t know who won, they only had numbers on the results. Bill got 20th, which was good considering.

Our group was kind of far back, but didn’t just limp in. It took just 3:36 to do 95 miles, which was nice. Our group still field sprinted, which was for nothing, but I guess it was fine. I just rolled in.

I felt pretty weird at the end. Like I had a crazy high fever and sort of burning up. I decided to go and ride a little to try to feel a little more normal. But, like before the race, a train was blocking my way, you know Burlington Rail Road deal, so I did a couple more laps up Snake Alley.

I couldn’t believe how easy it felt. I rode it once in a 19, 39 of course, and then tried it in a 17. I rode up it the fastest I’ve ever ridden it, according to Strava. That seems really strange. But I looked at the winner’s times, Adam, from last year and it was just a couple seconds slower than the super fast last laps. That is a good thing, because I wasn’t going as fast as I could. Maybe this condensed weight loss program made me really light for climbing? I don’t’ know. I wish we would have just done the criterium last night after the road race.

Bill and I drove straight to dinner, even before showering. I drank as much water as I could stomach all night. Plus, took Bromont to Dairy Queen. He loves soft serve ice cream. I think I ate enough, but haven’t really tested anything yet today.

I was thinking about racing the Master’s race this morning, to warm up for the PRO/1 race at 4 pm., but am going to just concentrate on the afternoon race and try to warm up properly. I’m still pretty questionable, health-wise, so should probably just try to do as little as possible. I’m cautiously optimistic. This race is the most important race of the weekend. It’s $2000 to win. I’ve already won the race a few times, so it’s okay, but I’d still like to have a good result. We’ll see. 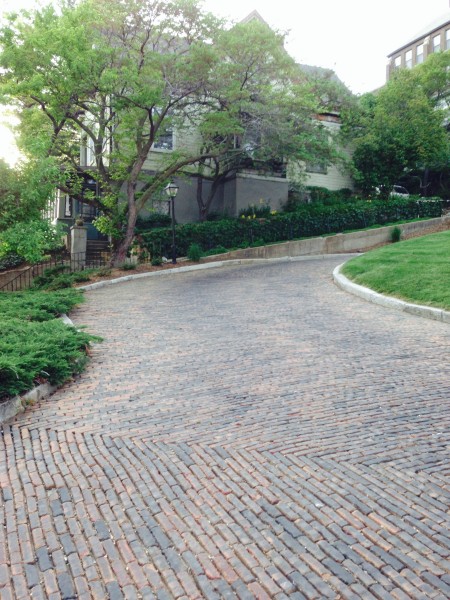 Snake Alley from the bottom. 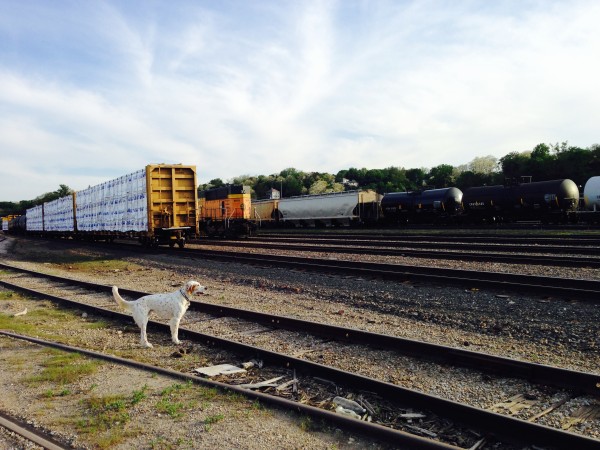 Bromont checking out the train tracks on his after race run. 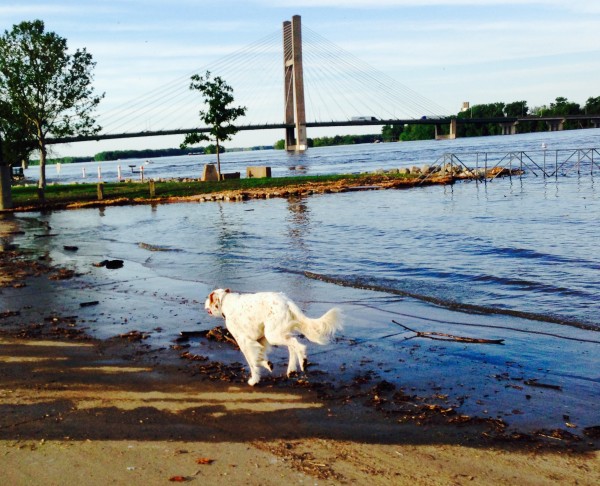 The Mississippi is just about ready to flood Burlington. It is super high. 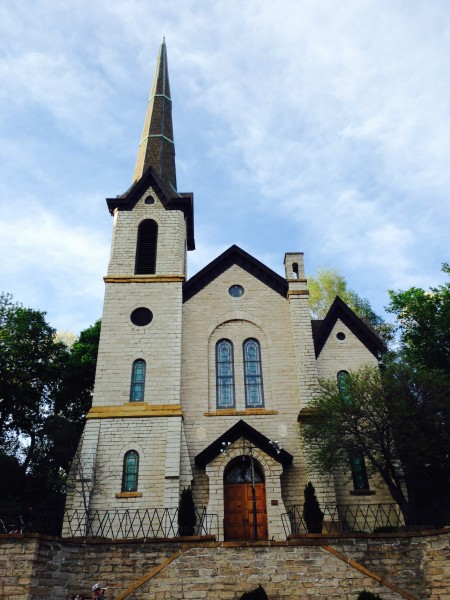 You can buy this church in downtown Burlington, just a block off Snake Alley. It is beautiful, wonder how much it is? 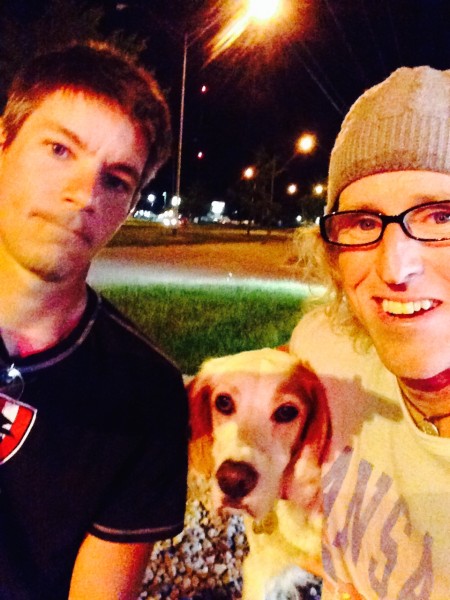 Bill, Bromont and I taking a selfie at Dairy Queen.