Yesterday was a really nice day for riding. And that is pretty much what I did all day, ride. Brian is training for the Dirty Kanza, so he was going to put in a huge day on gravel. He rode over to Topeka to meet Bill and I. Turns out my brother, Kris, got up 5 minutes before we left, threw on his clothes and joined us, sans breakfast. I have no idea how he does that. I ate a huge piece of steak, two eggs, yogurt with fruit and two pieces of cinnamon bread and probably could have used more.

Anyway, Brian had 49 miles by the time he met us. We had 10. We then proceeded to ride my favorite road, the River Road back east and then over the river to new territory north of Lawrence. Brian had plotted the whole route on Garmin and we had it downloaded. Roger Williams came cruising over from Lawrence on the River Road, so that made 5 of us.

The day was perfect, mid 70’s, but kind of windy from the Southwest. Not real windy, probably 15+. We ended up riding way north and finally got on some real primitive roads. Like so primitive, it became double track and then eventually no track. But, we keep going and never had to dismount, even though we were riding through 2 foot tall grass.

At about 75 miles, Bill flatted. Seemed pretty good, only one flat for 5 guys. Then a deluge of flats came. Bill again. He was riding fat clincher cross tires. I was on my road bike with just tubeless Hutchinson Intense 25mm tires. Brian had on his Dirty Kanza setup, some Clement 40mm tires. I was staying good, but all of a sudden, both front and rear. Seems like the Orange Seal I had just put in less than a month ago had separated and was just that watery stuff. I believe that the tires would have sealed if the sealant was still viable. That stuff doesn’t stay useable very long.

While Bill was changing his 3rd flat, Brian just turned around and rode back up a hard hill. I was going to go with him, but the hill was covered with big chunks of rock, the kind my tires weren’t good for, so I just hung with Bill. By the time Bill was done, Brian came cruising back, with a flat too. At least we didn’t have to get going and stop and start all over again.

So, we were short of tubes, but close to Lawrence. We only had 10 miles to Lawrence, where we were going to stop and get some coffee. Brian and I did a little hard effort session for a couple miles into the headwind. Brian had 40 miles on me, but it was pretty even. My ass muscles were seizing up, riding 25 mph into a pretty good headwind. Anyway, it was fun challenging each other for a bit.

We got to Lawrence and stopped. I think Kris might of got a Frappicino, but I’m not sure. If he did, that was the only thing he had the whole day. We still have 35 miles back to Topeka. Brian and Roger rode us 10 miles back, to even out their mileage. Brian ended up with a 150 miles. That must be good for the moral, knowing he only has to ride 50 miles further in a couple weekends at the race.

It was great riding home. My legs felt really great. And it was a cross tailwind. I was feeling better than Kris and Bill, but that was fine, we just cruised back. Kris just tood a shower and put on new clothes and headed out on his road bike, with lights. He didn’t get back until close to midnight, so I have no idea how many miles he ended up with. We had 123 before he took off the 2nd time. It took 6:46 riding time, for a 18.3 mph average. That was pretty good considering all the bushwhacking and stuff we had to do.

I don’t quite understand how I can feel the best all day with 110 miles of gravel riding on my legs. I love that about the sport. I was pretty jarred around though. Riding thin, hard tires that long on gravel doesn’t make for a very pleasant ride. I have to admit, my tires held up incredibly well, considering how gnarly some of the roads were. Like I said above, I believe if the sealant would of been new, I would of been good.

I’m stoked I didn’t cramp yesterday. Well, riding. Last night, about 11 pm, my left leg seized up once, but that is great compared to sometimes. I’ve been trying to eat a ton of salt on all my food, maybe that is making a difference. The European nutritionist for BMC gave a talk to the riders last year and told them to eat as much salt as they could stomach. I’ve never eaten much salt ever, so it is hard remembering to use it.

Okay, Trudi is in the middle of Utah, with a late ETA. She has 1000 miles to drive today. It is real windy and is going to heat up a lot the next couple days. In the mid 90’s tomorrow and Wednesday. Guess I use them for the heat training regiment I’m going to try. It is nice the weather is cooperating. 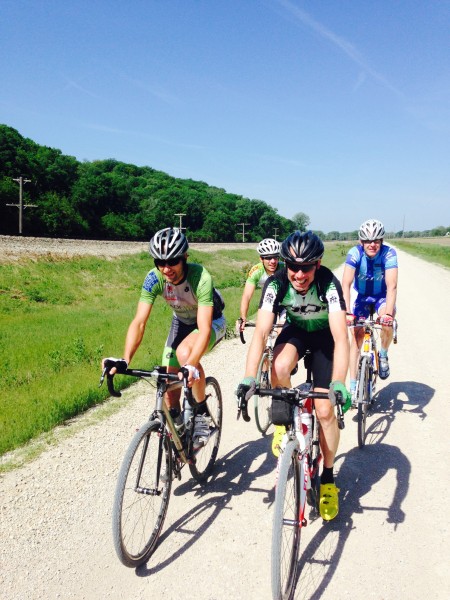 This is down on the River Road after Roger met up with us. 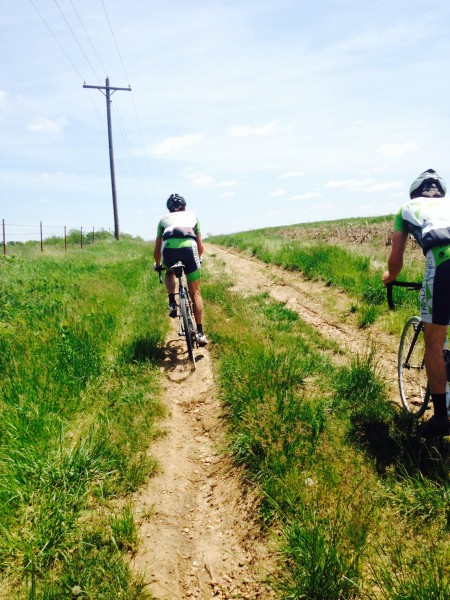 This is the start of our bushwhacking adventure. 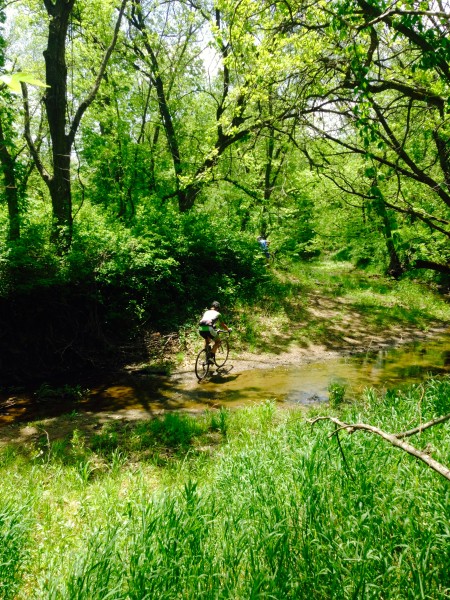 Brian riding across a small stream. I didn’t have to dismount the whole time. I was wearing my carbon road shoes. 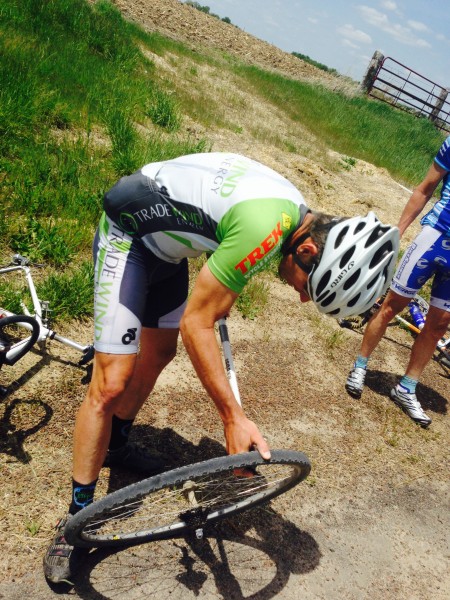 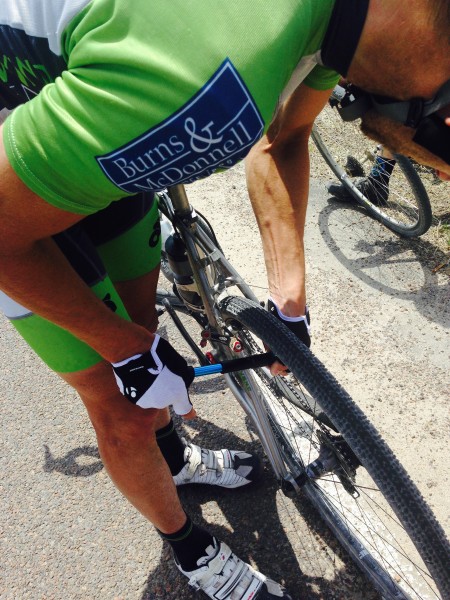 Brian using a micro pump. Those pumps sure are convenient until you actually have to use them. 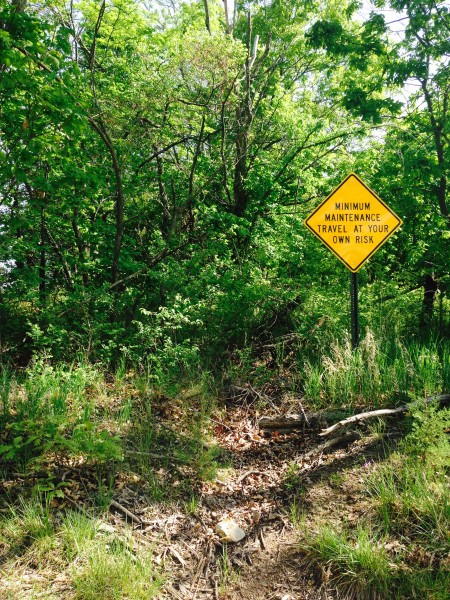 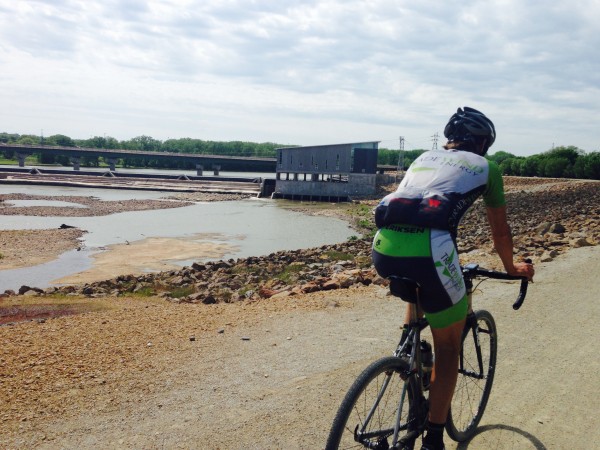 Brian riding into Lawrence on the levee. They are building a new hydro electrical plant there now.

11 thoughts on “Sometimes Training is More Fun than Racing”