I was sickened by the reports that they were just shooting/killing big dogs prior to last year’s Winter Olympics in Russia. I was thinking about how cruel it was that humans could care so little to let the situation get that bad to start with. But, those people didn’t have the luxury to be able to deal with the situation. People look after themselves first, then the animals 2nd, if at all.

When I first heard Bob Barker do the spiel about getting your pets neutered or spayed, I thought the guy was a nut. Now thinking back upon it, I am embarrassed about my first impression. I didn’t really think about it, I just judged. He was really doing our society a service. We don’t want or need more cats and dogs running around, or not running around, here. We have enough.

Monday, before 6 am, when I was returning from driving Trudi to the airport, I came upon a fox walking down the street in our neighborhood. Then Monday night, when I was walking Bromont late, I saw another, or the same, fox just standing in a yard. Bromont ran right by him, which should have been mildly embarrassing to him. Then last night, some sirens went off when I was just a couple blocks from the park and a whole pack of coyotes started howling. Like lots that were maybe just 50 meters from me, across a creek. I would have bet you a million dollars that there weren’t 10 coyotes within 100 meters of me right then.

I think it is amazing how wild animals can live in a city with people. Bromont regularly will be out with me running and next thing I know he’s chasing a few deer through the yards. It’s not like I live close to the country, I’m pretty much in the middle of the city. There is a big city park close by, that is left pretty natural, with a creek running through it, so that is where most of the wild animals hang I suppose.

Bromont got an ear infection last weekend. His ear looked pretty gross a couple days ago, but is much better now. I’m not much into cleaning out smelly ear infection stuff, but I’ve been doing it twice a day for him. He knows his ear is bad, so he tolerates it pretty well. I think Bromont gets the ear infections and skin problem every Spring with allergies. He and I seem to mimic each other in that regard.

We’re having all sorts of cat situations. Our long haired cat, Fran, seemed to forget how to clean herself. When I came back from being gone a month, she was completely matted. Trudi took her to our Vet to have her groomed. She came back looking so silly. Sort of like a lion, with a bob on her tail. I think she is embarrassed.

Plus, our cats are rearranging themselves. Wink, the one eyed cat has been pretty much been living in the basement the last three years with the bike stuff. But, a few months ago, during the winter, a feral cat took refuge in the basement and that drove Wink into making a decision. She moved upstairs and now even goes outside. She seems happier.

The feral cat is getting more used to us. It will eat food within 5 feet of me, but there is no way I can touch it. We had this happen once before with Willow, and she became super friendly eventually. This cat is older, so I’m not sure it will be the same. I probably should trap the feral cat and take it to the vet to get fixed, but I don’t want to scare it away. Evenutally.

Okay, just a few things floating around in my brain. There is lots more. Feral cat living in the basement. 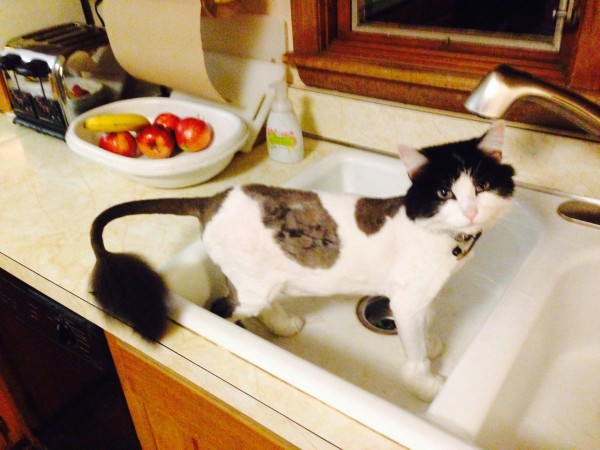 Fran shaved, in the sink. 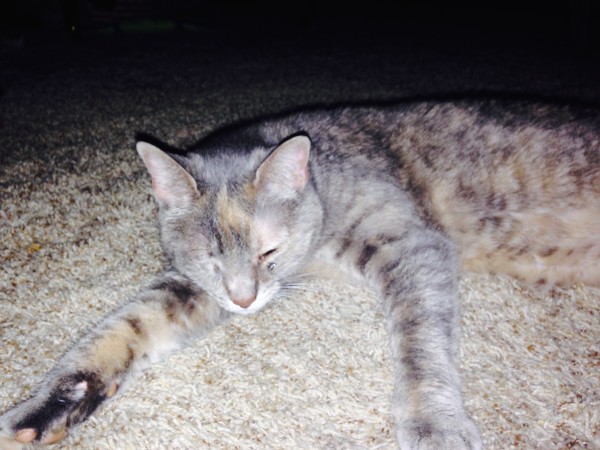 Wink lounging in the living room. 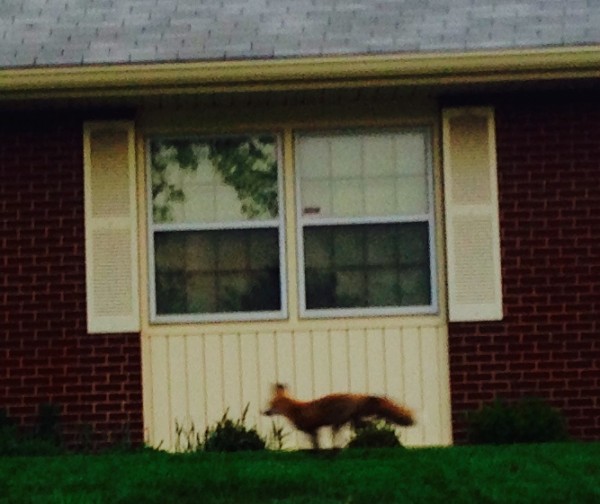 The fox in the morning. 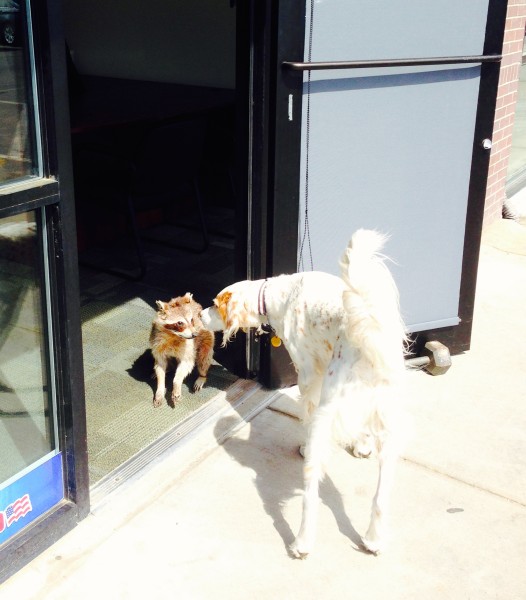 Bromont checking out a stuffed racoon at the National Guard recruitment place. 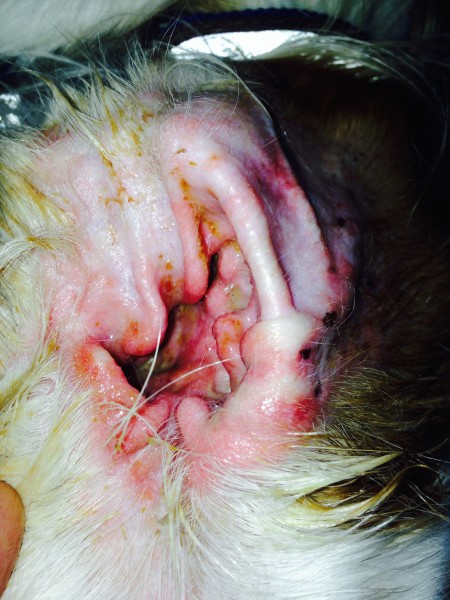