Yesterday was the 4th and final stage of the Joe Martin Stage Race. The weather was all around Fayetteville, but it kept splitting around the city nearly all day, so we all were lucky.

The final criterium is a pretty hard race. It is on a hill and is pretty technical. It has a substantial downhill, approaching 50 mph, with a hard corner at the bottom. Lots of brake pads are in need to be replaced today, I’d think.

The Jamis Pro Team was going to tempo all day. They had everything to gain by keeping the race together for a field sprint, with the race leader, Ian Crane, enough ahead to win, without a time bonus putting him in danger. So, when we started, they went to the front and just set tempo. Even so, the race wasn’t all that easy being one of the followers. The problem with being in a race like this, is the further you get back in the field, the more the slinky effect affects you, so you end up doing a series of all out sprints downhill and then chase and finally coast into the field on the hill. Just to start all over again.

Anyway, there were lots of small attacks, but no one got too far up the road. The Jamis guys did a great job of keeping it under control. With about 10 laps to go it started sprinkling. I recognized the danger pretty quickly and moved up to the top 20. It seemed to be getting pretty wet, but no one was falling, which was a relief. With about 5 laps to go, my rear wheel slid out on the fast downhill corner. Then the next lap, it happened again and I realized that I had a rear flat.

I moved over and rode to the pit. At the pit, the officials told me that I could either get a wheel and chase or get the field time, which was going to be the leaders time. I chose the later. Watching the end of the race, there were riders getting dropped the last 3 laps. It didn’t seem right that I would receive the winner’s time when the race was breaking up. But, that was the rule and, for the most part, a pretty big group came to the finish. A group of guys, led by Eric Marcotte, fell on the fast downhill corner, and they got the same time too, so I guess it was okay.

Everyone seemed to be riding pretty polite, which was a pleasant surprise. I didn’t once see anyone touch another rider and no one was really chopping or riding too weird of lines. Brad Huff, who won the stage, dove the bottom corner a few times, but he does it with class. I was more into taking that corner on the outside, but it is much less safe. It was a pretty great win for Brad. It was a hard race.

It was lucky that the weather held off. It was super ugly all around. The drive back to Topeka was sketchy. We nearly stopped because we were driving directly into a tornado that was on the ground. It was supposedly just 4 miles directly ahead of us. All the cars on I-44 just pulled over and each exit had an ambulance and firetruck parked, waiting. We, luckily were heading north, so we exited and headed up I-49 to Kansas City. But, the storms were constant all the way back.

I’m pretty okay with how the race went. I must have been off on Thursday, in the Hillclimb, so that was the reason I only finished 30th overall. But, it was great riding with the Boneshaker guys. It is strange jumping into a group of guys that you normally race against. I’ve known a couple of the guys for a few years, but met new friends. Michael Sheenan, a rider I didn’t know before, is going to be good. He finished 2nd in the U-23 overall and had 3 top ten finishes. Nick Torrca, who is just 18, rode awesome. He bridged a gap from the 2nd group to the front group, the last time up the hard feed climb on the Hogeye loop. He was the only rider in the race to do that. Pretty stellar bike racing for a first year Elite rider. And Heath Blackgrove was a true mentor to the the young guys, sacrificing his own results for the younger riders. Pretty cool. Anyway, it was a great experience.

It is supposed to be sort of cool and rainy the next few days here in Kansas. I think I’m staying around here this next weekend. The Velotek Grand Prix is here locally. It is a two day, 3 stage race in Lawrence. The TradeWind Energy Team is doing a local Lawrence elementary school, Woodlawn, visit Friday morning. We’re giving every kid a free helmet doing a little talk. Should be fun.

I’ve been riding a lot, so I might cut back some. I’m approaching 2000 miles for the month, nearly 100 hours of riding. And there is still 3 days left. That is big mileage for me, considering how little I’ve been racing. I need to race more to get some leg speed and more top end. Or motorpace, but I haven’t done that for years and years, so it is going to have to be racing. I’m riding okay, but was surprised I didn’t have the snap to stay in the front on the last climb on Saturday. I had to chase back on, which I hate to do. So, I need more top I guess.

The allergies and burning in Northeastern Kansas are always a concern for me now. They are both going to be pretty horrible this week. It just depends on how much it actually rains. That helps for both. Okay, lots of pictures below. 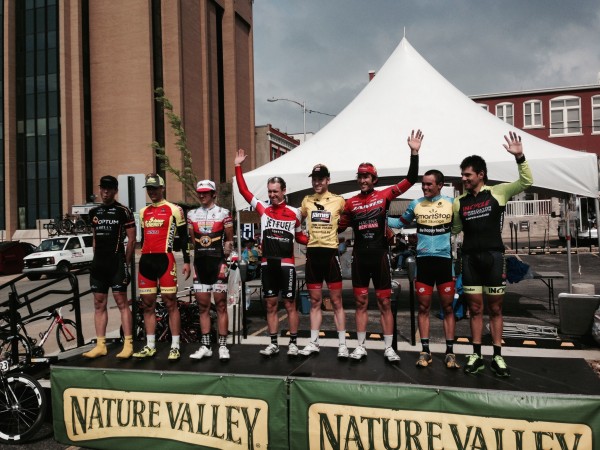 They called lots of guys up to the final podium. 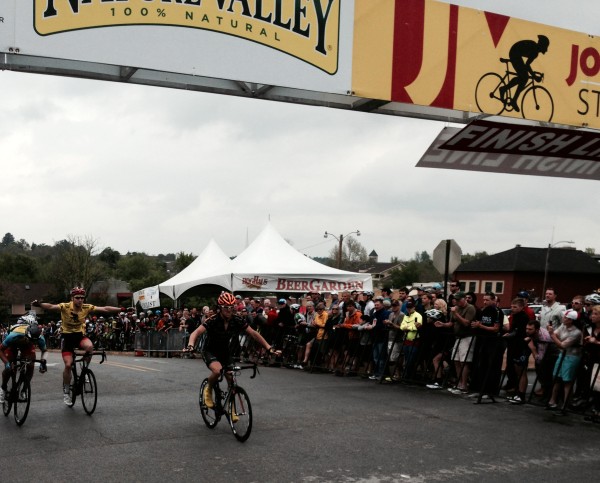 Brad Huff nearly to the line for the win. 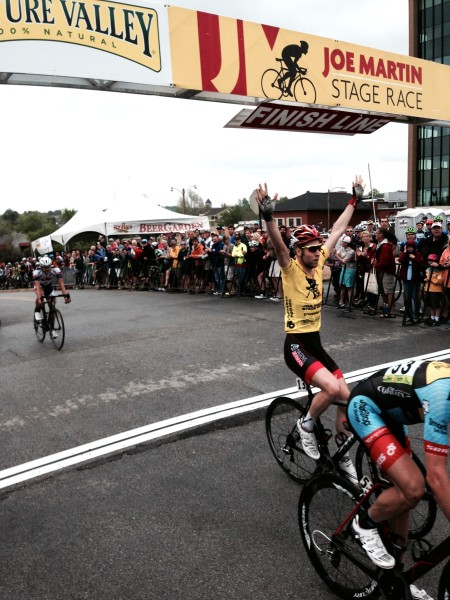 Ian Crane, 3rd on the stage and overall winner. 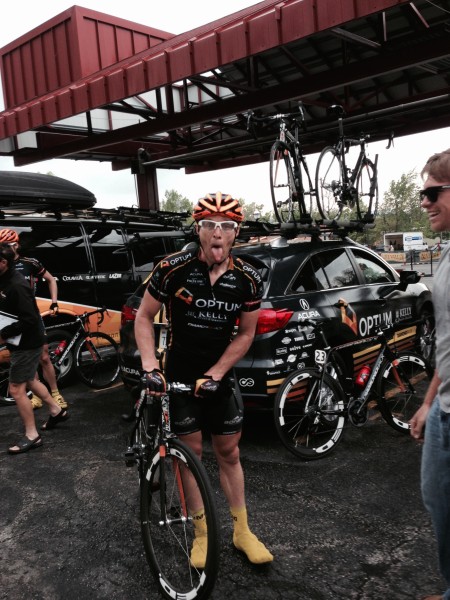 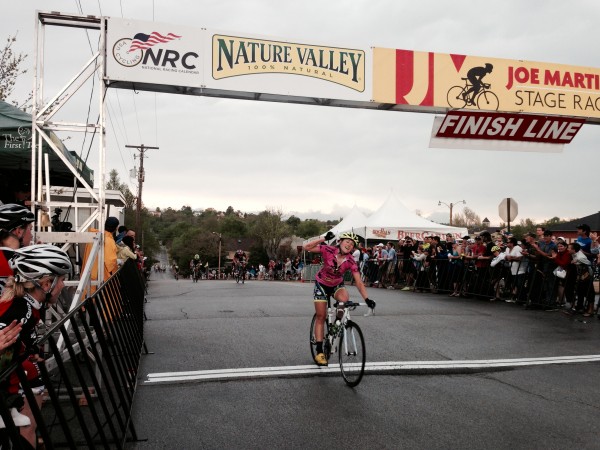 Here is Lauren Stephens, my Boneshaker teammate, Mat Stephens wife, winning the criterium. She won 3 out of the 4 stages, plus the overall. 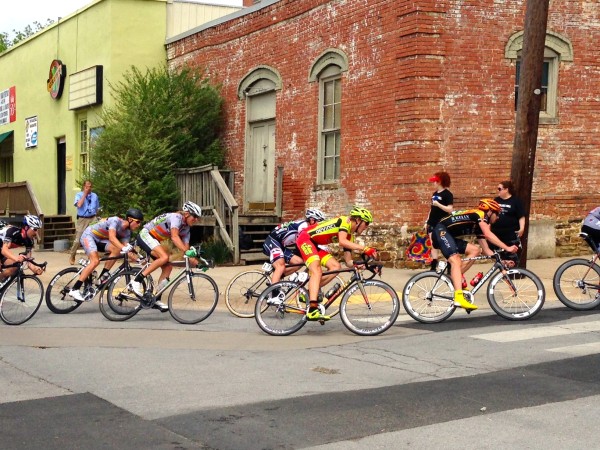 Mike Sheenan and I on the bottom section of the course. 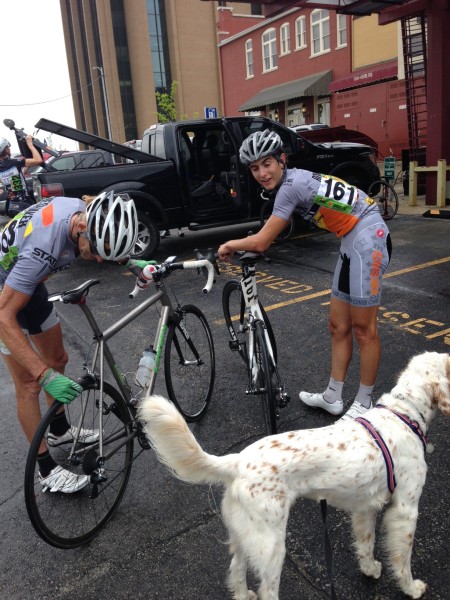 Nick and I after the race, me bumming about flatting a new Vittoria CX. 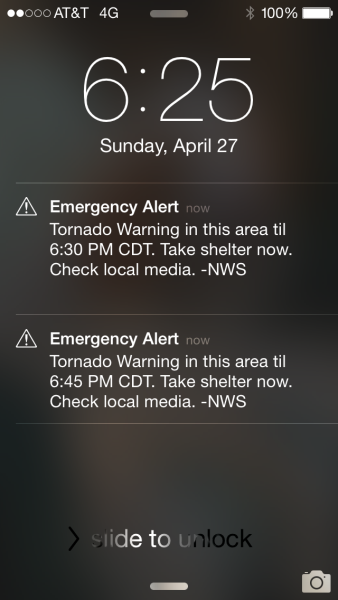 Alerts were going off on our phones continually on the way home. 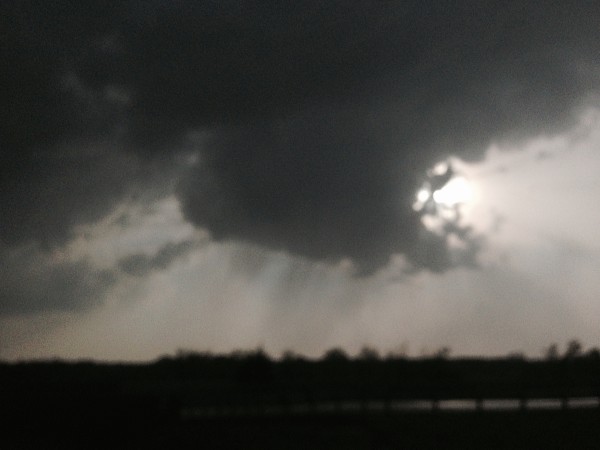 The skies were always looking scary. 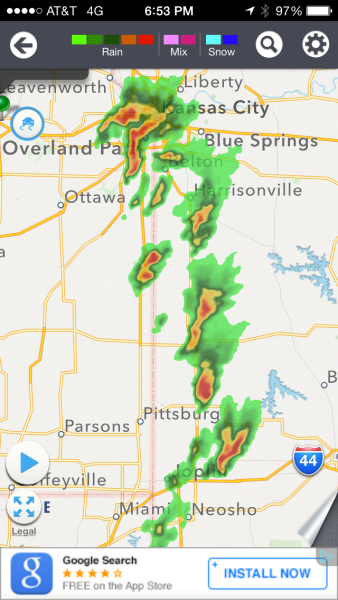 I-49, the road we were driving is directly under this line of storms. I love thunderstorms in the Midwest. I just don’t like driving in them. 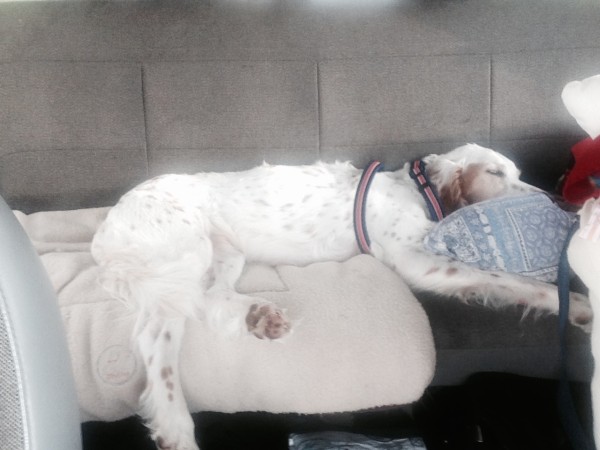 Bromont was very unconcerned during all of this. 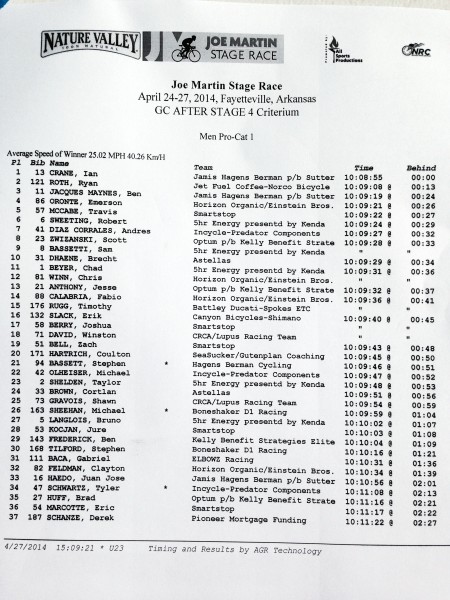 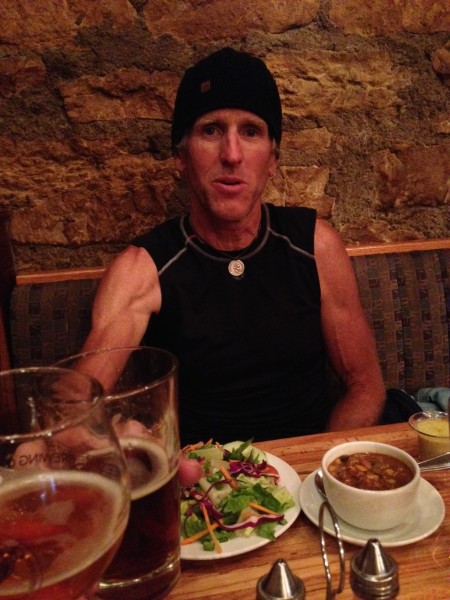 We got back to Lawrence in time to get some food at FreeState. 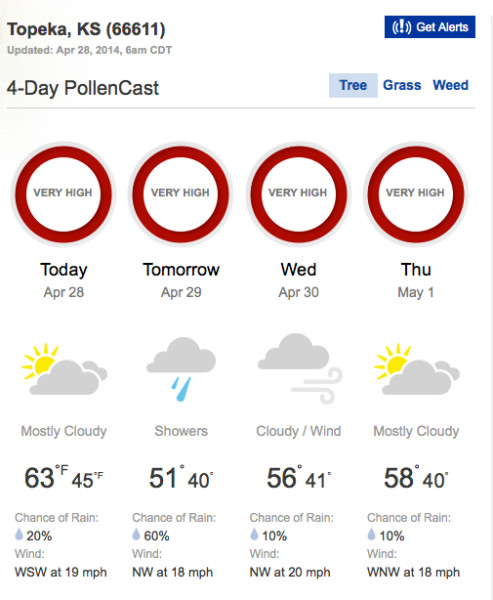