Yesterday was perplexing. After the time trial/hillclimb, the day before, I had no idea what I was riding like. The race was 110 miles long, with just one big climb at mile 73, but it was 10 miles long. There were lots of places that some might consider climbing, but they were more just big rollers.

The race started pretty fast for the first 15 miles. Lots of mini-moves to establish a break. I felt like hell. I actually felt pretty horrible the first two hours. Maybe a little longer. I was having a really hard time catching my breathe and was continually coughing little mini nodules out of my lungs. It had to be allergies. Or maybe asthma, I don’t know. All I do know was that I was pretty depressed and not feeling it. Plus, I had a crazy headache as soon as I clipped in.

A break rolled and the Jamis guys went to the front and set tempo. Eventually, I started feeling better, which I still don’t understand. The Smartstop Team started a series of attacks right before the feed zone, at 47 miles. They eventually got 4 of their guys into a move, plus a 5 Hour Energy rider too. This rattled the Jamis guys, just a bit, but they held steady and chased the Smartstop break down. I have to applaud their efforts. The race would have been really boring without the efforts.

This whole attack, chase thing sort of split the field, but most everyone eventually caught back on and were there for the start of the big climb. Man, guys are really elbowing and riding what I’d consider “dirty” to hold position getting to the bottom of the climb. I thought it was a total waste of energy. The climb is 4 lanes wide and you can move up where ever you want. I find it that the guys that have the least chance of staying in the field seem to use their elbows the most. It is one of the worst evolutions of the sport during my time in it.

The climb was complete tailwind. We were climbing continually over 20 mph. A lot of riders got shelled on the early pitches. The climb goes up in short pitches, followed by short downhills. It was pretty strung out the whole way up, lots of micro attacks, the speed was high. I couldn’t believe how easy it was though. Not once on the climb was I in the least bit of distress. I’m not sure if I was just feeling really good, or it was just that easy. A pretty big group crested the top together, so it probably was pretty easy.

The last 25 miles was generally downhill and tailwind. We were coasting along at over 30 mph nearly the whole last hour. I was pretty optimistic about the finish. The Boneshaker Team that I am guest riding for had 4 guys in the front group. During the pre-race meeting, the plan was to set up Michael Sheehan for the sprint. I raced against him last weekend in Dallas, he won on Sunday and was going good.

Coming into the sprint, I got caught a little out. I got stuck on the right side of the field and decided to just go with it. The problem with that is that I didn’t have much control of my own destiny. Historically, the right side gets squeezed up against the curb and there is a ton of braking and sprinting. It wasn’t quite that bad this year, but by the time we hit the left corner with 1.6 km to go, I was buried. So buried, I knew I was screwed.

So, I just kept moving up. The finish is hard. A series of hills, two or three little short hills, with short rests, then a right corner and 300 meters uphill to the finish. I was maybe 40 riders back. I moved up to the top 25, but by the time I got to the last corner, I was pretty much done. I just rode up to the finish, hoping that no splits in the field happened. Once again, historically, the field has a lot of time splits in this stage. They didn’t put a split in the field until 52 guys back. I was 36th. Michael finished 10th, pretty much free lancing the finish after Heath got him into position at the bottom of the hill. Here’s a link to the complete results, women too.

I really enjoyed the last half of the race. I pretty much hated the first two hours of the race. I need to try to figure out how to get riding well before two hours into a race. Some races aren’t even two hours long, so that won’t work. I have another chance to figure it out again today. Another 110 mile road race. Yesterday was pretty hot, mid 80’s and it’s supposed to be hotter today. There were a lot of guys covered completely in salt yesterday, so I put a ton of it on my dinner last night. I want to join the crusty salty rider club. I didn’t have any at all on me. But, I hardly felt like I was going to cramp much at all, so that is a good sign.

A couple of in race deals –

I was humored, like I said above, watching these “teams” of riders trying to line it up at the front all day. Especially before the climb, all these teams were trying to emulate the Tour and ride in some sort of formation heading into the climb. These guys waste so much energy fighting for position when there is no reason to do it.

I have to single out the Astellas Oncology team. These guys rode in line for hours, behind the Jamis guys that were pulling. I have no idea why they thought they needed to do this, but they did. I watched one of their guys, Matt Green, who I don’t know, but saw his number, throw an elbow into Chris Winn, Horizon Organic/Einstein Bros., who I sort of know, just to try to follow one of his team mates through the field. Chris was eating a gel and he didn’t say anything to the guy. I asked him if that it bugged him that the guy put an elbow into his hip for no reason and he said, “You have to pick your battles.” I told him that there wasn’t really a battle going on, it wasn’t an important time in the race. It was just a guy trying to follow his team mate and the group shifted, so he made a hole by contact. I hate it. I have no idea when it became okay to make holes with contact, but it seems common nowadays. I was a little apprehensive about calling these guys out publicly, but maybe it will be a start to an end of all this stupid contact. You can click the results link above to see how well it worked out for them.

The best save of the day has to go to Fabio Calabria, Horizon Organic/Einstein Bros. It was after the last climb and we were cruising along at 35 mph. He hit something on the shoulder, something substantial, and blew out his rear wheel. Whatever he hit, it threw his rear wheel off to the right about a foot. Normally, a guy would have high-sided, but Fabio corrected accordingly and kept it up. For sure he would have fallen if he would have been riding clinchers, with the rim hitting the asphalt, he would have no ability to control the bike. He got a wheel, rode back to the field and went on to finish 9th at the end. Pretty good bike riding.

I was talking to the kid, Jordan Cheyne, who finished 2nd in the hillclimb. He rode super fast and is just 23. I was asking him where he was from. He said Vancouver and I said something like, following in the footsteps of Roland Green? He said a firm No! I told him that Roland was a pretty good cyclist before he got super charged. And at least he quit the sport while he was still kickin’ ass. I thought that was pretty admirable. I told him a story about after Roland finished 3rd in the World MTB Cross Country Championships, I congratulated him and told him he was officially on my cheater, cheater, pumpkin eater list. He asked what that list was. I told him that it was for anyone that finished on the podium of any world championships in cycling was impossible to do without doping, back then. He took it a little harsh and asked me outright if I was accusing him of using drugs. I told him that he made the list, so by default, it meant that. But, making the list, being the top 3 in the Worlds, was really important, so it might offset being on my personal list.

Okay, I hope I feel the same today as I felt at the finish yesterday. Well, not at the finish, because I was really winded, but the last 2 hours. The course is pretty good for me. It has a hard steeper climb, and it’s 4 laps, so it should be interesting, but it most likely will come down to a field sprint. Why would the Jamis guys want it any other way. And by the way they rode yesterday, they shoudn’tshouldn’tany problem keeping it together again. 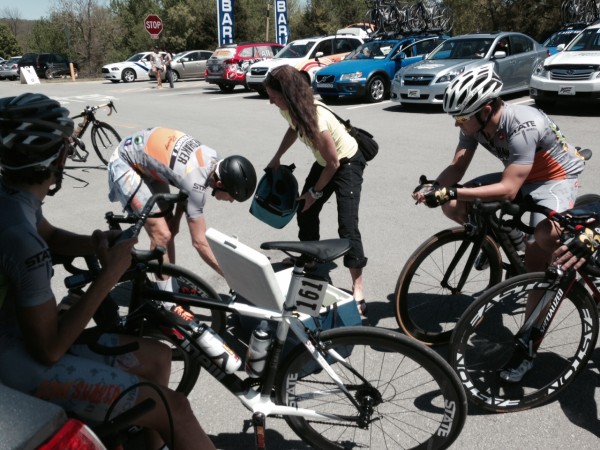 Trudi fed our team, so she is even working when she officially “not working”. 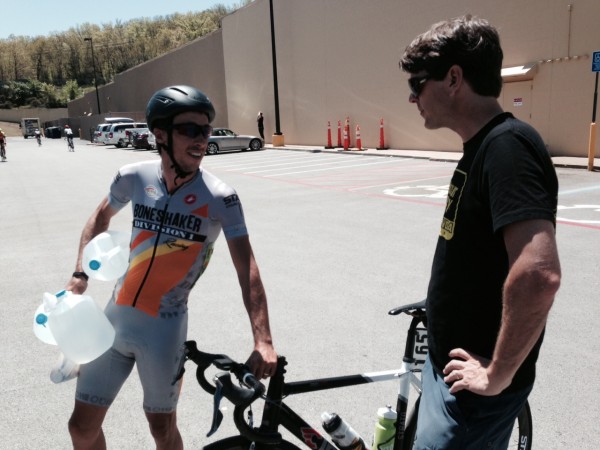 Here’s Heath talking to Frankie Andreu. They got back to the Toyota days. 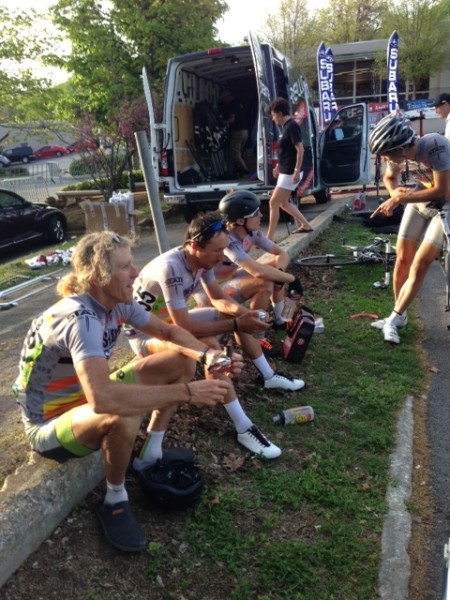 Having a beer after the finish with the rest of the Boneshaker Team. 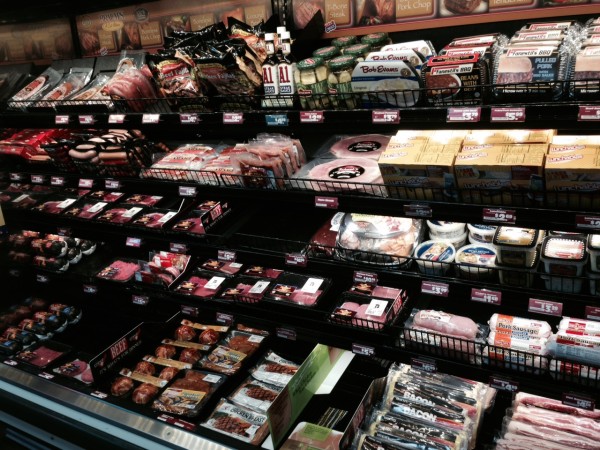 I went by a Braum’s ice cream after dinner and had no idea that they had a complete meat department. 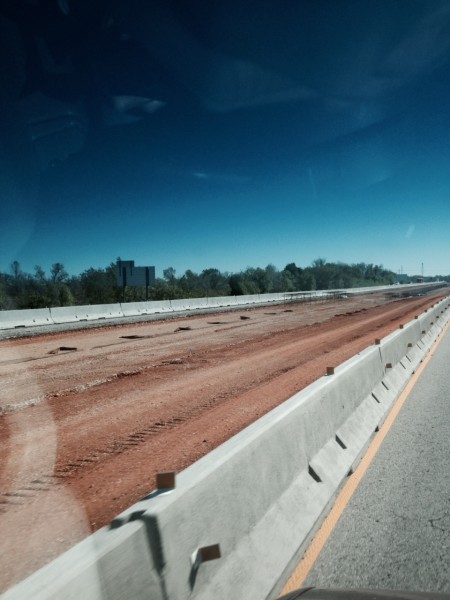 If you haven’t had the pleasure to come down to Arkansas, or Oklahoma for that matter, the soil is super red.