Monday wasn’t the best day for our local club training ride. We got stopped for long periods at all the busy roads on the way out of town, which is twice, and nothing seemed to be flowing well. By the time we got out West, the wind was blowing pretty good, but there was still a ton of smoke in the air from grass fires. I wasn’t too into it.

Towards the end of the ride, we nearly always ramp up the speed for a few miles. We started rotating and got a pretty good double echelon going. There were only 8 of us, so it was a pretty compact group. We finally got down to just 6 guys rotating, with two sitting on. About a mile out from the stop ahead sign we sprint for, it was going pretty good, 31.8 to be exact (from Strava. The ride was redeeming itself in my mind.

Then disaster struck. Randy Cox, who’d been pulling pretty good initially, but was sitting on the back, overlapped his front wheel with Bob’s rear. I heard a screech and then the nasty sound of someone hitting the road. I was waiting for the sound of more guys crashing, but thankfully, it was only one.

We all did a U-turn and Randy was laying in the middle of the road with his legs crossed. He was a little winded, obviously, but other than that, you wouldn’t have thought much of anything happened to him. He was so cool and collected, I was pretty sure that he just had a big amount of road rash. A couple cars, and a motorcycle stopped to help, which was nice. Randy told Bob that he thought that he needed an ambulance. I asked him if he thought he could move. He replied, “Steve, I’m a pretty tough guy, I’m hurt.”

And that was an understatement. He should of just left the word pretty out of the sentence and he was really hurt.

I drove to the emergency room and the triage nurse said that they were going to take him to surgery for a broken hip. I thought, shit, that’s not good. Getting back to his room, his family was there. He was completely cognizant and mainly worried about his work schedule. He owes a drywall business and is very hands on with the bidding, etc. I guess he’d been on his cell phone and the ambulance ride to the hospital, already making arrangements for the next day’s work. Who does that?

Anyway, Bob had fallen a couple years ago and broke his hip pretty badly, so had personal experience with the issue. I told Randy about Wayne Stetina and his hip replacement. Wayne walked out of the hospital two days afer surgery and was riding within a week.

But when the doctor came to the room, he checked Randy over and said that Randy had broke his femur. Wow, a broken femur. They were going to have to go in and put a rod in, then the bad part, no weight bearing for 3 months. Plus, he had a broken collarbone. The doctor said he might as well go and fix that too.

I was so surprised. Mainly because the stoic way that Randy was handling the pain. You would have thought that he had just skinned up his knees or something. When the EMT’s pulled his cycling shoe off out on the road, he told them that he had surgery on his foot the day before for hammer toe (football) and that it might look bad. He wasn’t supposed to be riding, not sure how he was riding, but he was.

I told Randy that in the short term, the femur is much worse, workwise, than a broken hip, but in the long run, he’ll be pretty happy that his femur broke and he doesn’t have a replacement hip. He didn’t even seemed the least bit worried about the collarbone.

Anyway, man, I’m not sure I’ve been on a ride with someone hurt so badly. And I’m pretty sure I’ve never met someone as tough as Randy Cox. I didn’t know Randy too well before, but learned a lot about him from the experience, but sorry it had to be at Randy’s expense. This is obviously going to be a setback for Randy, but with his mindset, I’m sure he’ll be back spinning his legs in little circles way before summer is over. 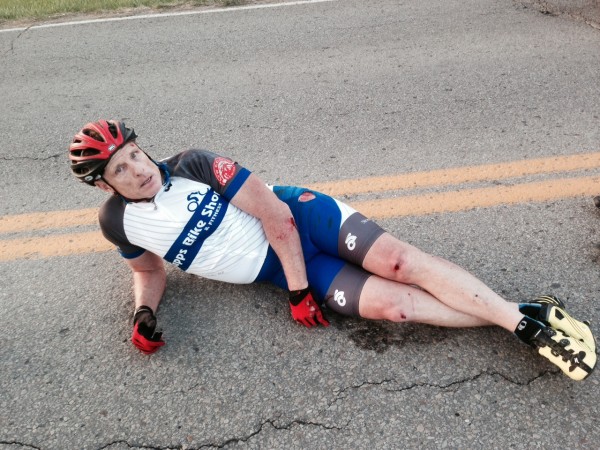 This was pretty much the position that Randy was in when we got back to him. 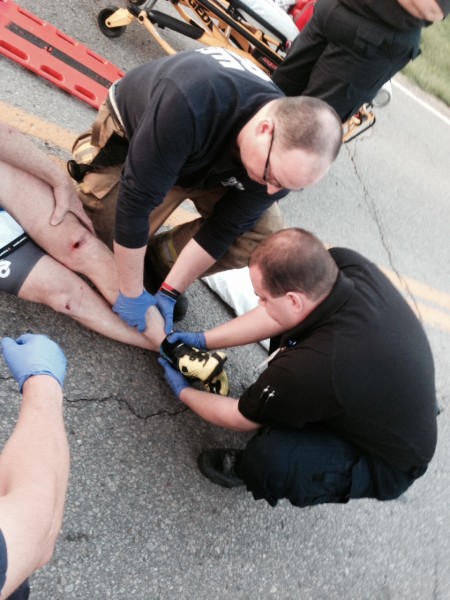 The paramedics were having the hardest time with his shoes. 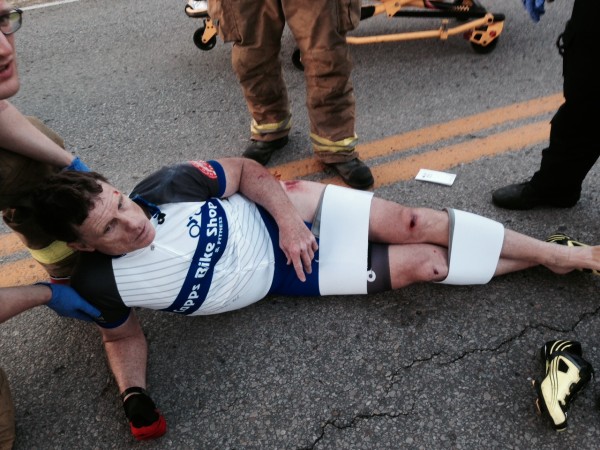 They did a real good job packing him up. He didn’t hardly wince when they were moving him around. 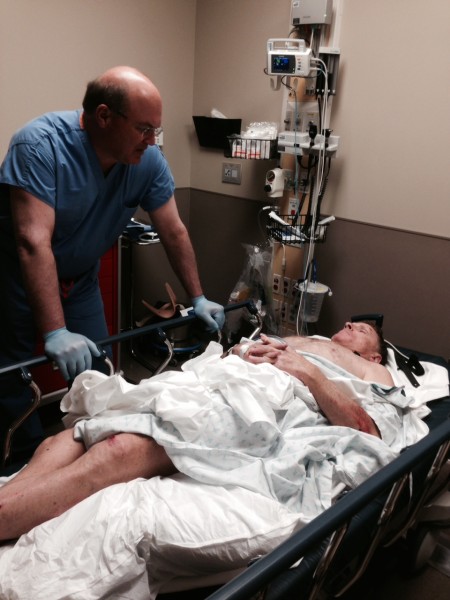 The doctor, bearer of bad news. I liked the guy. Seemed down to earth and competent. 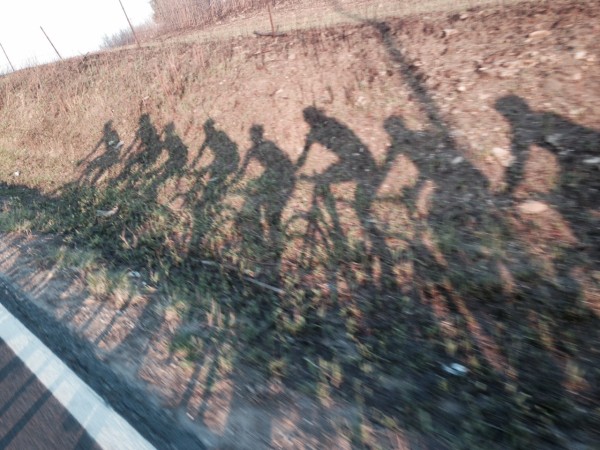 The ride was much better earlier.