Today is my last ride for a while in Southern California. I talked to my old team mate, Thurlow Rogers, and am going to meet him this morning 25 miles North, at the Starbucks in Carlsbad. The Wednesday Ride up through Camp Pendleton to San Clemente and then back meets there. It will be just over a 100 miles from La Jolla. I’m leaving in a few minutes, 6:15 am. Like you guys might know, I’m not big on early morning rides, but it is what it is.

I’ve done a couple good rides Monday and Tuesday of this week. Monday I went out with Don and pre-rode some of the dirt sections of the Belgium Waffle ride. We went out over Lake Hodges and then to Highland Valley. It was really hot out there. Like upper 90’s +. I felt a little beat from racing the day before, but we were going a pretty easy pace, so it was fine. I ended up riding back up the coast a bit, so had 104 miles for the day. Strava for the day.

Yesterday I felt I needed to rest. But I don’t know what got into me, and I ended up riding dirt again up through Rancho. I was riding through Del Mar and climbing up this hill and next thing I know, Nelson Vails is riding next to me. Nelson rode with me on the Levis team when he won the silver medal in the Olympics. We stopped and talked for a bit. I hope to go for a ride with him sometime later this year.

Anyway, I kept going, only 60 miles, but I nearly completely fell apart. I think it was because of the heat. My Garmin was showing near 100 again, but it must of been a little cooler than that. All I know is that when I got back to the coast, I felt amazingly better when it was in the 70’s. I stopped at a Whole Foods and bought a liter of bubbly water, some tangerine juice and some strawberries. I sort of limped back. I hope I don’t feel that way this morning. I never feel that good starting out early, but it is going to be cool. It is pitch dark right now.

It’s close to 20 hours to Austin. That’s a long day of driving. I’m assuming I can cut a couple hours off that. Bromont is probably ready for a long drive. He loves to sleep in the back of the van. I think the purring of the diesel engine is relaxing for him.

Okay, I’d better get moving. Here are some pictures from the last couple days. 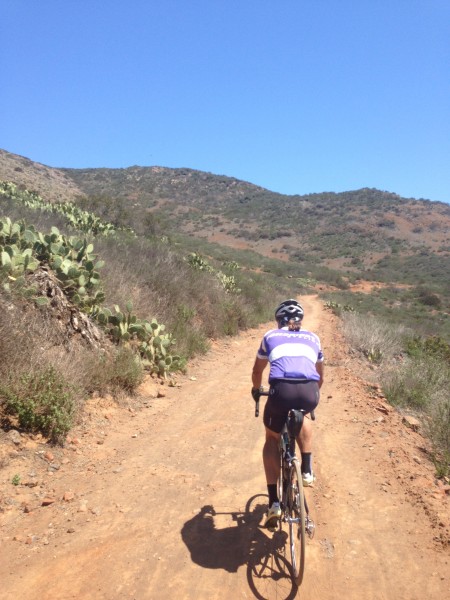 Don riding up a dirt climb. I like the cactus all around. 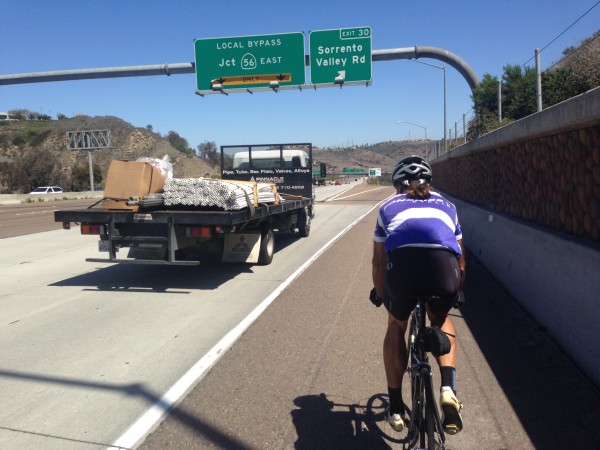 We also did a little stint on I-5. I don’t ride Interstate Highways much during the year. 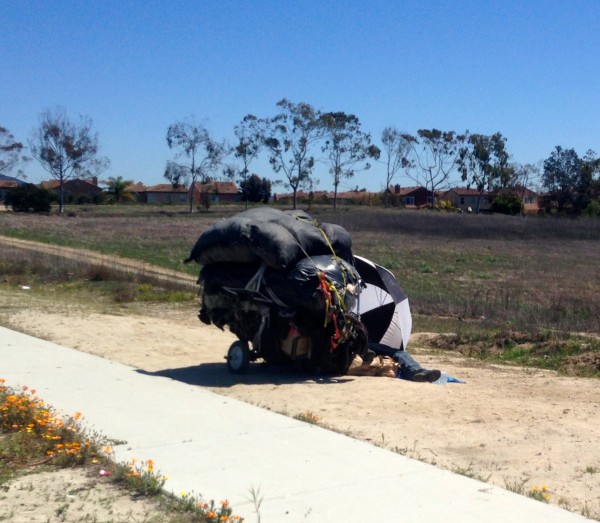 Many of the homeless guys around here have quite a load of stuff. This guy was sleeping out under his shopping cart at noon. 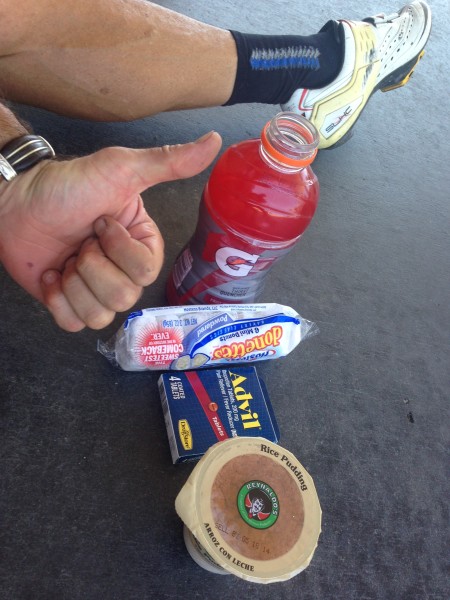 Don hasn’t been riding much and every time we stopped, he bought an enormous amount of calories. Pretty interesting mix here. 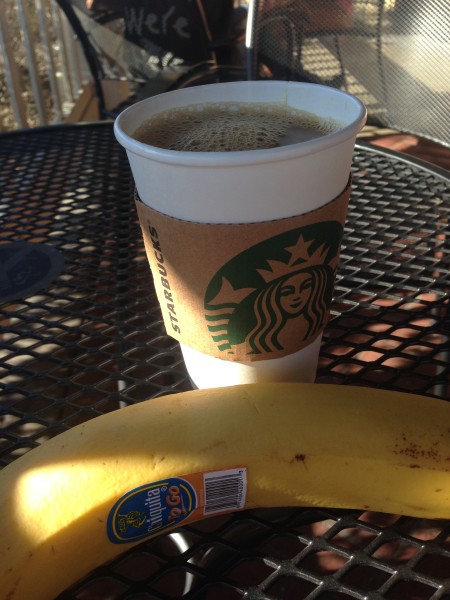 My stop later along the coast. 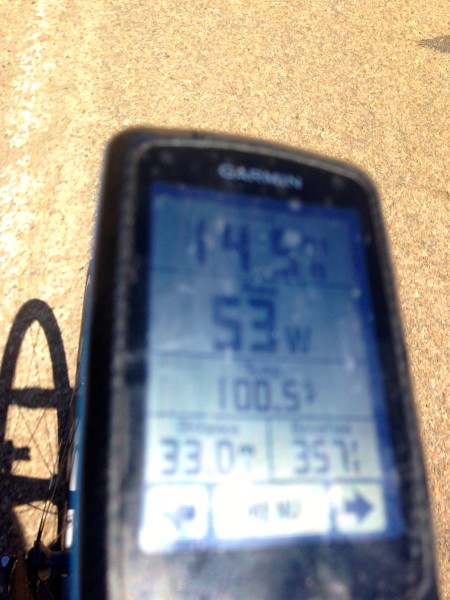 Pretty hot on my Garmin, but it was in the direct sunlight. 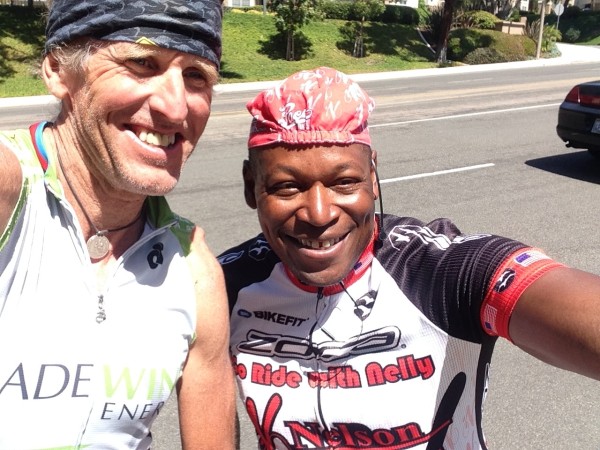 A selfie of Nelson taking our photo.

Nelson is having Gita make retro Levis jerseys for his rides. Michael Fatka came up with this design-it is a classic. 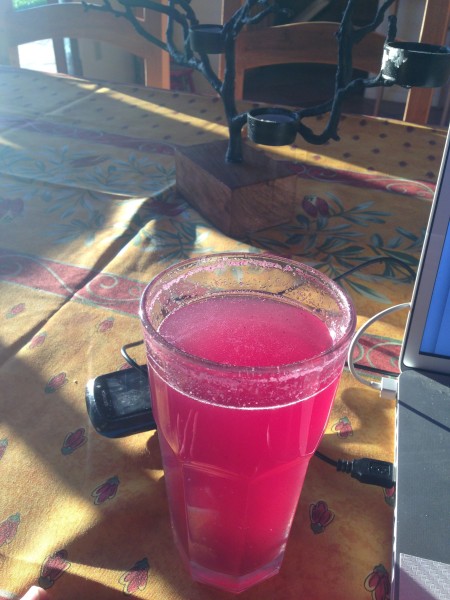 I’ve been drinking a large glass of San Pellegino with Emergen-C in it after riding. Sue calls it “nectar of rejuvenation”.

10 thoughts on “6 am Bike Riding is for the Birds”