Yesterday was the first day I’ve raced for 3 weekends. It wasn’t my first choice of races, a short criterium, but it was the only race around. I normally like the Redlands criterium course pretty well. It flows pretty well, is pretty technical and has a few places where you really need to accelerate to stay in position.

That wasn’t the case yesterday in the Pro 1/2 race. And the cause was the wind. It was super windy, by Southern California standards, and it was swirling, making riding off the front really negative. That being said, a break did sprint for the win.

I rode a couple times in the morning. First time I started out, I just did a small loop and ended back at the van. For some reason, I felt the need to nap. I’m not sure if it was it was already getting hot or I have allergies when I get up there, but I just never felt right. So, I crawled in to the back of the van a slept pretty hard, with Bromont, for over an hour, when my phone rang and it was Trudi calling from France.

I talked with Trudi for a while and by then, it was just a couple hours before the race. I drove over to the course and met up with my friend Ian, from Kansas and we got our numbers and I took him up to the Sunset Loop where the circuit race was going on. It is an awesome ride going through the old neighborhoods of Redlands up to the top of the ridge. Ian has never been to California, so he was super into it.

We got up to the Sunset Loop right about when “the field” was coming by. 3 laps into a 12 lap, 90 something mile race. It was blown to pieces. There were less than 30 guys in the front group and they all looked like they were hurting. My friend, Joseph Schmalz, who rides for Hincapie Development Team was just getting popped. He looked over when I yelled and I could see he wasn’t having a good day at all. I felt for him. The climb was somewhat tailwind, which makes it that much harder, plus it was in the upper 80’s.

Anyway, Ian and I went back to downtown to race around in circles for an hour. I got a double espresso 15 minutes before the start. I was debating whether to. Sometimes, espresso and heat aren’t a good combination, but I went ahead anyway. In retrospect, it was a mistake.

Anyway, the race started out and it was really slow. And it never got much faster. The headwind sections made it super hard at the front and really easy sitting in. I only knew a handful of guys racing. A few extra Jelly Belly guys were racing and a handful of other Pros. There are a lot of 1/2 teams in Southern California that have green and black jerseys. It’s really hard telling them apart.

The race was mildly aggressive, but groups never seemed to get very far up the road. Finally, 6 guys escaped and got a pretty good gap. It seemed like there were a bunch of individuals that didn’t like the move, but nothing got organized to chase.

I hardly tried to do anything. I didn’t feel right from the the start. I felt jittery, from the coffee I think. Plus, I wasn’t breathing that well and didn’t have a ton of snap, which I’ve had for over a month. Like I said above, I’d had issues with real bad allergies out in Redlands. That explains the breathing and scratchy eyes I had. Whatever the reason, it was way too easy sitting in and way too hard, for me, to ride off the front, so I hardly participated.

The break stayed away and we were sprinting for 7th. I got pretty swamped on the last lap, but I’ve done the race so many times, I have the sprint down pretty well. Not well enough, because didn’t get into the last 3 corners where I had planned. I was planning on leading, but two guys got in front of me. I passed one with two corners to go, but still went into the last corner in 2nd. I made a huge mistake and shifted into a harder gear coming out of the corner. I was over geared and the guy in front of me rode away, and one guy passed me, so I ended up 3rd in the field sprint, 9th in the race.

It didn’t really matter, it wasn’t like we were sprinting for 1st, but it is always nice to finish the race correctly.

The stage raced finished an hour later. I thought the Smart Stop guys were going to have a hard time controlling the race. And they did. But just barely. Travis McCabe rode a great race and just came up a little short. Two riders got away coming into the criterium finish, Joseph Rosskopf (Hincapie Sportswear Development) and James Oram (Bissell Development Team). They held off a destroyed field of 25 guys or so. I was surprised that the Optum/Kelly Benefit guys weren’t fulling more at the front, since Travis had no one left at the end. They lost 2nd and 3rd overall because of the two off the front. It came down to a sprint between the leaders and Rosskopf won the race and the overall because of the time bonuses. Pretty cool end to the weekend. Click here for overall results. Look how many DNF’s and how far most of the riders finished down.

Anyway, I was a little more wasted than I’d hoped from just racing an hour. Like I said, I wasn’t firing on all cylinders. I’m back in San Diego. Don and I are going out for a long ride today. It is going to be hot again. Don is sort of training for the Spy Belgium Waffle Ride at the end of the moth. I just want to ride easy and just enjoy the area for a few more days. 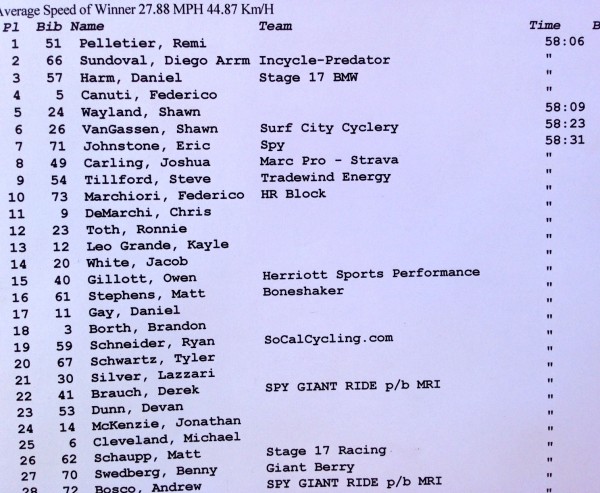 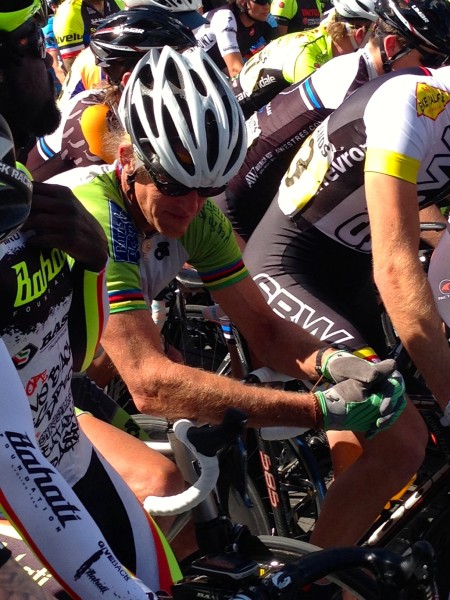 I lined up next to Rahsaan Bahati. He took a couple good pulls during the race. 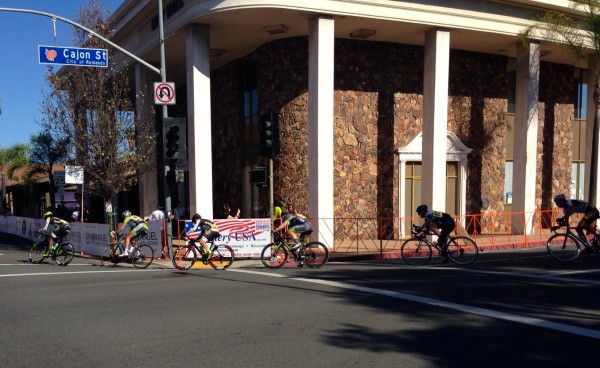 Here he is doing a half lap effort, me following. The only problem was he shifted into his 11 about half way down the start finish stretch and it got jammed between the 11 and his frame. I just about ran into him from behind. I was leaning the wrong way, overlapped. I was lucky to stay upright. 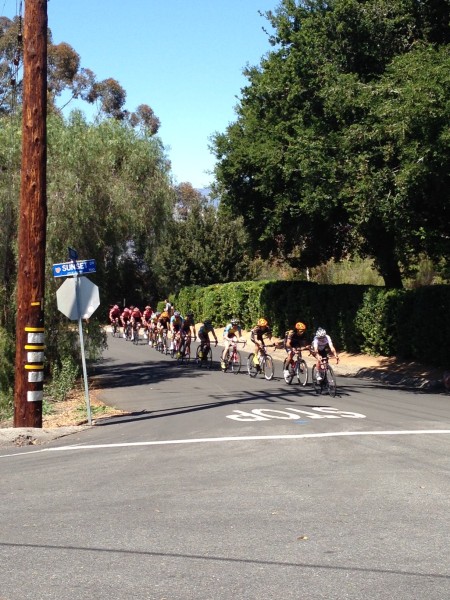 The riders up on the Sunset Loop early in the race. It was already blown apart. 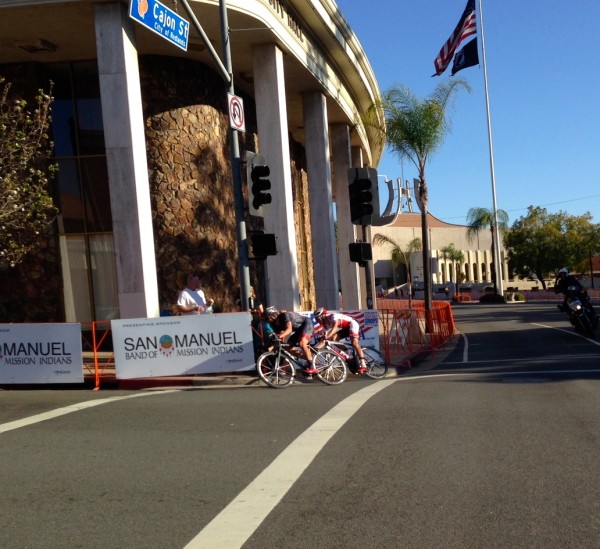 Joseph Rosskopf passing James Oram in the final corner to take the stage and overall race. 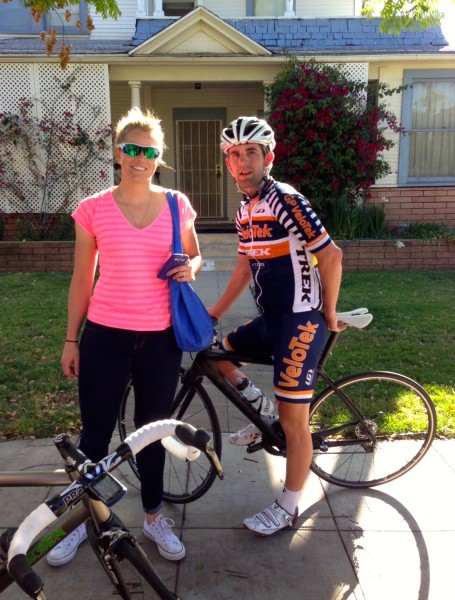 My friend, Ian and Cate, from Topeka. They took the train out to LA. 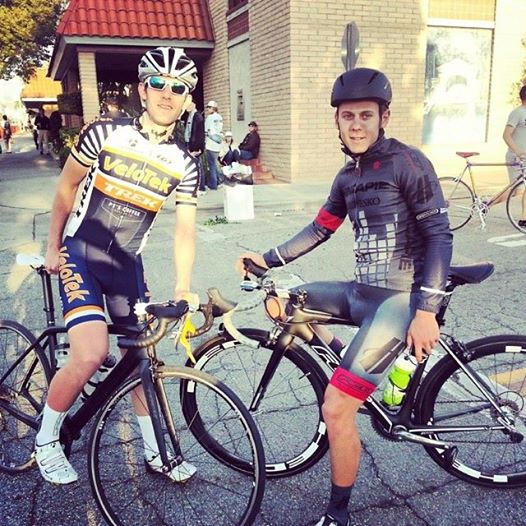 Ian and Jospeh before the start. 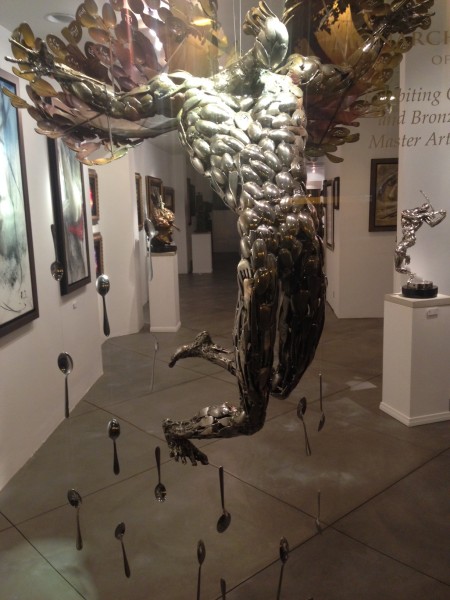 I saw this in a store in La Jolla last night. It’s made mainly of spoons and silverware.