Cycling is strange in the respect that you tend to run into people while out training and they can converse with you. I’ve never really just been out running or doing some other sport and a random guy comes up and starts talking to me. And out here in Southern California, it happens all the time. Probably because there are just so many more people out riding and probably the guys out riding tend to be on the same roads.

A couple days ago, I was riding North, about ready to descend Torrey Pines, when a guy rides up and asks me why I wasn’t wearing a helmet. Then he asks me how many miles I ride, for the day, the week, the year. He then says I must be really good and asks me my “record time” climbing Torrey Pines. I told him I didn’t know, but I’m sure there is a Strava segment up the thing. He tells me that Floyd Landis holds the record at 4:10, but he was “juiced”. I was thinking that 4:10 sounded pretty fast for climbing Torrey Pines, but I really didn’t know.

He then goes on to say that he is a runner and that he is just using cycling for training to run. He goes on to quote the mile record times for virtually any age group of runner. He was only talking about male times, not female. I wonder if he knew the female times too?

Anyway, he tells me that if I could run a 4:25 mile, I’d have a world record for the mile. Next year it would be 4:35. 4:35 doesn’t sound that quick for the fastest ever ran. I figure the reason for that is that by the time most great runners are in their 50’s, they’ve destroyed their knees enough that they can’t really run very fast.

Anyway, the guy was a numbers genius.

On the way back down the coast on Sunday, we rode up by a guy that looked like he was homeless. We got stopped at a light and I looked over and realized he was a bike tourist. I said something to him and he tells me he has ridden 150,000 miles and had been to 60 countries. I told him I had him on the mileage, but not the countries. I asked him where he was going and he said wherever the wind takes him. I guess Tijuana if that was really the case. I guess about asked him if he wanted to stop and get something to eat, I’d was interested in hearing a few of his stories, but somehow I missed the opportunity.

Anyway, both these guys were really interesting and added to my day. Cycling allows that. I like it. Randomness is a good thing sometimes. 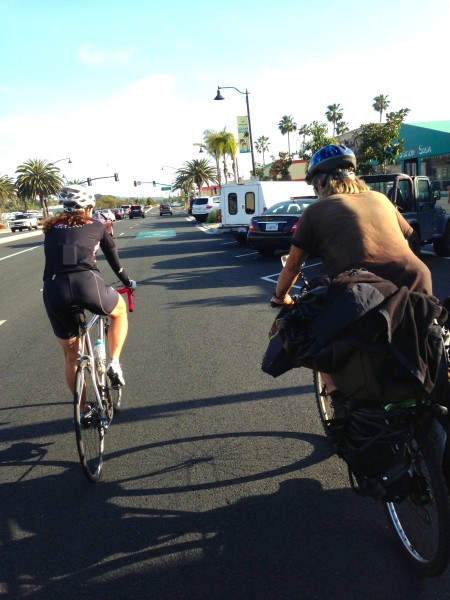 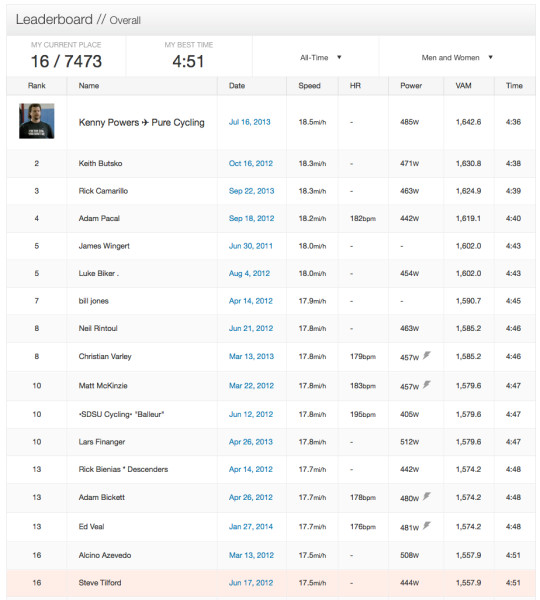 Strava segment for Torrey Pines. I’ve never killed myself up the thing, on a tailwind day, so maybe the KOM isn’t out of reach.

18 thoughts on “Meeting Guys on the Road”