I hate to admit it, but we truly live in a disposable society. I try the best I can to not participate, but I do on a daily basis. I guess I am somewhat of a hypocrite ragging about it here, but I hate it.

Yesterday, I had my day sort of planned out. Ride earlier in the day, to rest a bit for racing today, then make some phone calls, watch the Olympics, etc. I did some errands around noon, and when pulled back into my driveway, I got out of my van and smelled a distinct hot brake odor. Like really strong. So, I walk around the van and put my hand down by the rotors. The right rear is super hot. So, I get out the floorjack, and jack up the rear. I put the van in neutral, and try the rear wheels. The left turns like normal, the right is seized.

So, I get out the air compressor and take the wheel off. It is hotter than shit. I can’t stop myself and next thing I know I have the brake caliper off. I had to use a towel to hold the caliper, it was so hot.

So, I let the caliper cool down and check it out. It is a 1 ton van, so it has pretty beefy brakes. It has two pistons per caliper. One of the pistons doesn’t move when hydraulic pressure is applied. There is a rip in the seal boot, protecting the piston from the elements.

So I take the caliper off and hit it in with a wooden dowel. It loosens the piston, so I reattach it back into the van and have Kris pump the brakes to push the piston completely out. There is a seal, that has a rubber boot attached, that keeps the piston sealed. I pried the seal out and that exposes more of the piston. The piston has just a tad of surface rust, no pitting. I just take some steel wool and remove the rust. But the boot is toast.

I cleaned my hands and went inside to try to secure a seal/boot. Man, what a hassle. I look around the internet and am not really positive what I need. There are caliper rebuild kits, with seals, but all for different calipers. I call the Ford dealership and they say that they don’t sell individual seals. I talk the guy into looking at the schematics anyway. He says he is surprised, but he sees a rebuild kit with the seal. But, the kit is $40. A complete new caliper is just $50 at Advanced Auto Parts. I call a couple of auto parts store and they say that they quit selling brake rebuild kits because of liability reasons. Really, liability problems. Maybe they shouldn’t even sell calipers if the consumer might install them incorrectly? Maybe quit selling auto parts all together, since they might be liable for consumer misuse? I thought about ordering a couple different seal kits from Rock Auto, but finally just give in and order the caliper from Advanced, to be picked up.

The seal would have been $3.99 if I could have found the right one. But, it is nearly $60 for the new caliper.

If someone who doesn’t know hot brake smell, I’m sure they would just keep driving the car until something gave, either the rotor or pad. Then if they take the car to the Ford dealership, where the caliper was $120, I’d bet it cost another $250 for labor. So that would be about 100 times as much as the $4 seal. I paid 15 times the amount of the seal, plus a little brake fluid and brake cleaner.

It is such a waste. There was a core charge, so they are going to send in my old caliper and refurbish it and send it back out for use, so that is a little consolation. But the throw away movement our country has evolved into, bugs me, on nearly a daily basis. Forget the different of cost, the shipping of the caliper around the world to get rebuilt when I could have just put in a seal and used it for another decade is just plain wrong.

Most things can be fixed. Can you imagine throwing your bike away when you break a spoke? Or ding your wheel? I’ve garbage-picked a Honda lawn mower that its only issue was a broken pull cord. Who would throw away that? Just about anyone living in suburban America is who. Nearly all electronics that are out of warranty become trash. It is so wrong.

Anyway, that is the way it is going, so I guess I’ll try to keep swimming against the current as much as I can.

Old caliper and worn out seal. 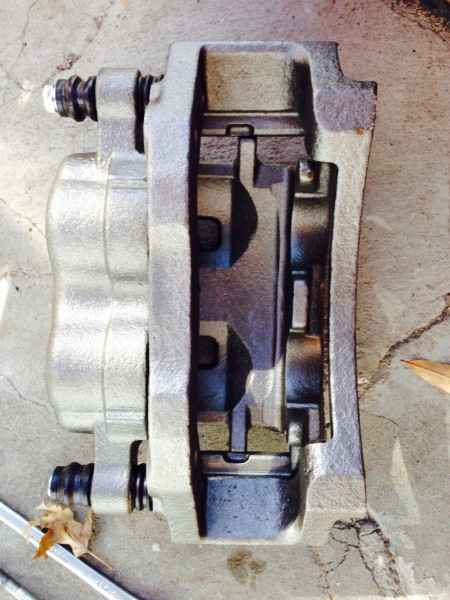