Okay, I’ve given it some time and still don’t have the subject straight in my mind, but am feeling “pressure” to address Lance’s call to me. I’ve been trying to not think about the call with Lance. That is the best way to try to figure something out for me, not think about it and then when I’m riding or doing other long term physical activities, my mind tends to default to subjects that need attention and process them. Since I don’t really “get it” yet, I’m going to just start writing, stating the topics and addressing them. I’m sure it will come across as scattered and random, but that is sort of how the conversation went.

Let me back up a little. A couple weeks ago, out of the blue I got a phone call from Lance Armstrong. I’d been getting emails for a couple months, but didn’t think they were really from Lance, so I blew them off. I just got to California, was assembling my bike and my phone rang with an Austin area code. I answered it and it was Lance. We talked for about an hour about lots of things concerning cycling. Specifically doping in the sport.

I can’t really put my finger on why Lance called me, even though I asked him straight up why he called. I said that I was going to write a post on the call and what was the real reason he called. He answered back that he wouldn’t want to tell me what I should write on my website, but would hope that it would address the issue of the doping, sanctions and fairness.

There is no question that the guy is pissed off about the whole process. He thinks there is injustice in the whole process as it applies to him. He kept going back to a “theme” of what really seems fair.

He had some pretty good arguments and I definitely agreed that he has a valid gripe. He used a few analogies asking which is worse. Specifically, he brought up

The same with Ryder. No penalty because he “admitted” to doping a real long time ago. I agree, it’s bullshit. He probably views it as more bullshit when USADA went back and took away his Tour titles back way before either Crawford or Ryder admitted to their violations.

Like I said above, Lance feels he wasn’t treated fairly. I’ve spent a fair amount of time thinking about that. Most of you know my views on these guys. If not, it’s simple. You use doping products to race bikes and get caught, you should lose your privilege to race, ie. a lifetime suspension. But, that isn’t the current rules.

I told him outright that I thought that all the guys that “confessed” were not treated right. That they deserved to be suspended forever. But they weren’t. And he was. Seem fair? No, it doesn’t, to me either.

Lance feels he wasn’t given the same options that Vaughters, George, Danielson, etc. were offered. He says that Travis Tygart was outright lying about the whole issue on having him come in and getting a reduced suspension. He said the guy was trying to justify USADA’s budget because currently, they catch virtually no one. I agreed that the dope testing procedures that they do currently, are nearly valueless.

Lance used an analogy to football and gave the example of, what would I think if someone did an investigation into John Elway, from the Denver Broncos, and said they were going to take away his Superbowl rings from the 90’s. I told him that I wouldn’t be interested in it at all. He asked if I thought it would be fair?

I told him there was a big difference. For one, John Elway was retired. Lance was still racing bikes when the USADA investigation started. Two, I told him that most fans of football don’t aspire to be professional football players. Very few of us want to be a left guard for a professional football team. But, nearly all the people I ride bikes with would love to race bicycles professionally. I told him that when these guys say that the playing field was level, back in the day, that is total bullshit. Most of these professionals think that just because 198 out of 198 starters in the Tour, back then, were taking PED’s, then it was fair. What these guys fail to consider is that the pool isn’t just the few Tour riders. It is every bike racer that aspires to do it for a living. These guys were cheating all the juniors, Cat 3’s, even Master riders, from all over the world. They seem to think that they would be the best with or without doping, which just isn’t true.

Now that it is a couple weeks out, I think that Lance finally just called because he didn’t like my post about Frankie and George. I think he was calling to defend George. He said that Frankie wasn’t as innocent in the whole deal as it seems and that George was closer to right than not. He implied that Frankie didn’t “come clean” the way that it seems and that “we all were doing the same thing”. I told him I didn’t view it that way.

I don’t really care what Frankie did. He did seem to come out and confess his usage of EPO before he “had” to. Back in 2006. And he did it with dignity. He didn’t take anyone down with him. He definitely didn’t try to take Lance down with him. I respect that.

I told him that the reasons George is staying so afloat is that, for one, he, George, has stayed loyal to Lance. We, as Americans, value loyalty. And two, he has stayed relatively quiet about everything. I didn’t understand the upside for George to be talking to Frankie’s local paper and throwing rocks. I asked Lance why George did that and Lance said he didn’t really know why. He thought that maybe it was because George was writing a book and that all this was going to be included, but he wasn’t sure.

I don’t know why George is writing a book and asked Lance if it was for the money. He said he hasn’t asked George about it, which I doubt is true.

I’m not sure that Lance told me anything I hadn’t already read or heard before. It was very interesting hearing his perspective. He does present some very convincing arguments. But those arguments are not really addressing the real issues. He thinks the process isn’t fair because everyone involved isn’t being treated fairly. I agree that he should have an issue with that. But it is a very small part of the situation. He used drugs to win most of the events he competed in. That is the issue. Unfair sanctions is way down my list, but I can understand why he has problems with it.

I couldn’t help but give Lance my view on his current situation. I thought, or maybe still do think, that the reason he called was to try to control his legacy. I do think he would love to compete, on some level, but I really think that he is doing damage control. I told him he created his own problem now. And that is because he sounded so genuine and so believable throughout his whole career. So believable, that when it all turned out to be lies, that it completely destroyed his credibility. He still sounds genuine. Really genuine. But with no credibility, whatever he says now, is not going to be believed.

I said that I thought that his legacy would be what his legacy will be. I told him the best thing that he has going for him is that Americans are very forgiving to their fallen heroes. We really don’t hold grudges forever. We, as a country, don’t think any different about people from Germany, Japan, or maybe even Vietnam, even though not very long ago, we were in war with these very countries. We don’t hold long term grudges as a society. I think that will apply to Lance, and I told him just that.

I’d like to see Lance face to face and talk some more. It is easy sensing the flow of a conversation when you can actually see the person you’re talking to. The call was a little unsettling, initially, then after awhile, I started getting antsy, wanting to go out for a ride before the sun went down.

He told me that he isn’t riding his bike much at all. He said he is running some, but is really playing a lot of golf.

That really didn’t surprise me. Golf would be good for Lance now. It might be the best thing for him. I’d think that golf would allow him to focus his concentration on something as mundane as hitting a little white ball towards a little hole in the ground. Maybe this would work the same as bike riding is for me. Allow his mind to mull over problems, allowing him to deal with them appropriately. He should be playing a ton of golf, if that is the case. 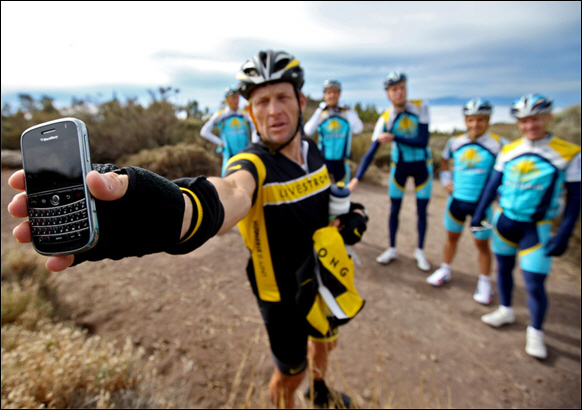 78 thoughts on “My Call With Lance”