My friend Stacie called a couple days ago and told me it was exactly one year ago that I had surgery on my shoulder, after falling at Cyclocross Nationals in Madison. I guess I knew it was in February last year, but was trying to suppress the whole thing.

It is probably not the best time to write something on this because the last week or so, my shoulder has been working pretty badly. I’ve been having some shooting pains going down my arm and reaching out and picking up something, like a cup of coffee, is nearly impossible. But, it wasn’t working up to my expectations ’til then either.

Don’t get me wrong, my shoulder works. I can move my arm around, put on a shirt, and do about 50% of things I use it for with no pain. But the other 50% of the time, it is an irritation to a real drag.

One of the things I can do fairly well is anything to do with riding bikes. Other than reaching back into my pockets, which wasn’t that easy before I destroyed my shoulder, most of the motions of cycling aren’t painful, thus alright.

I was trying to do a lot of personal rehab up until about a month ago. I did a bunch of nordic skiing, then dug a lot of holes in the grounds and did some other things that I thought was strengthening my shoulder, thus not needing the rehab. I’m not sure about that now.

The question I ask myself is do I regret the decision to get it fixed? And the answer is, a hesitant, no. The completely torn status meant that the muscles would retract more and thus the chances of repair would have been worse as time went on. One of the rototor cuff muscles/tendons is just hanging there, even now. The guys in Vail couldn’t get it reattached. But it was like that before I torn the rest of it up, so I was hoping to get back to the usability before the accident. That isn’t even close to the case as of yet.

I’ve run into a lot of people the last year who have had this surgery. Everyone has a different view of the surgery, and a different recovery rate, but one thing that all agree on is that it is not a fun thing to go through. A friend from San Diego put it best when he said, “I wouldn’t wish it on my worse enemy.” That pretty much sums it up. 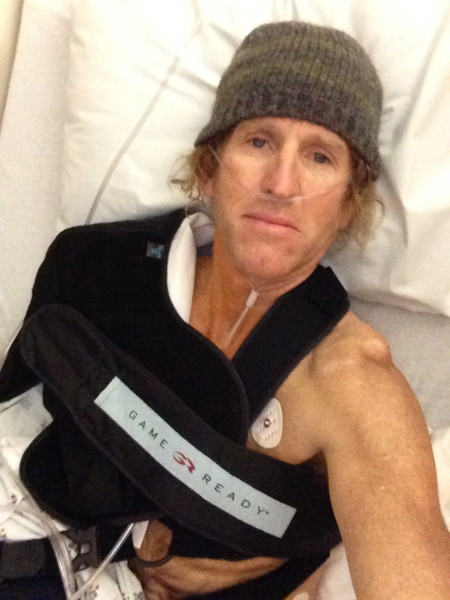 Exactly a year ago.

6 thoughts on “Shoulder Surgery-“I wouldn’t wish it on my Worst Enemy.””