Today is my last day in California for a while. I’ve ridden around 500 miles this past week and feel pretty good about that. I would have liked to ride more with some groups, but that didn’t seem to materialize, so I did nearly all of it alone.

I’ve been starting and finishing most every ride on the coast highway. It is the best way to get up to North County and pretty much the only way to get back into La Jolla returning over Torrey Pines.

I’ve run into a lot of different people riding on the coast highway this past week. Mainly guys just commuting to work or back home, depending on the time of the time. These commuter guys seems to be pretty friendly, but also competitive. It is amazing how many times I’m being passed by a guy riding a slick tired MTB bike, that has been turned into a winter commuter bike. I’m not sure why you’d need a winter commuter bike in San Diego, because there isn’t winter, thus no winter weather, but a couple guys I’ve spoken to said that they were riding their winter bikes. These guys come blowing by me when I’m already riding over 20 mph, so they are definitely working going faster than that on a 30 lb. bike. I usually catch up to them when they stop for a light and say something pertaining to how well they are moving along on such a heavy bike. They act like it is their normal everyday speed, which is close to impossible or they would be on Pro Tour teams.

Then there are the guys out training. Since I’ve mainly been riding on weekdays, I’m not meeting up with so many racer guys. I see a few dozen throughout the day, but not the hordes I see on the weekend days. The racer guys aren’t so friendly, which is strange to me. They look straight forward and don’t really say hi or anything. I don’t really pass any guys training, I only get passed even though I’m riding at my normal training speed, which is brisk.

It seems like a lot of these guys are just out racing up and down the coast. They can’t always be riding 23-25 mph or more.

Yesterday I rode up and did a small loop in Elfin Forest. It is about a 70 mile ride. The wind was good and blowing from the Northwest, which meant a tailwind coming back, which is nice. I was approaching the Torrey Pines climb, which is kind of the official end of the ride. After that it is about 6 more miles into La Jolla, but all residential and lots of traffic.

About 1/2 a mile from Torrey Pines, this guy comes blowing by me. I was already going maybe 23, so not slow, but the wind was at my back a little. I decided to be one of those guys and follow the guy up the climb, whether he went inside or the outside road up the hill. Torrey Pines is not even 2 miles, but a few hundred feet. The inside the Park road is steep and shorter. The outside is more gradual and longer. I usually ride the inside because it is way more scenic, but this guy stayed on the coast highway, which was outside.

I could tell the guy was riding hard, you could tell by his pedalling. He just stayed on his seat and mashed away on his pedals, keeping pretty much the same speed at the bottom of the hill. I had to accelerate to match his speed. I was riding, maybe 10 bike lengths behind him. I could tell he was wondering if I was still riding behind him, but knew that I was far enough back that he wouldn’t know unless he turned around and looked. And I knew he wanted to look.

I was mildly surprised how long he kept going good. He kept a real good rhythm up at least 2/3’rds of the hill. I was going at least 80% as hard as I could, which was working. But with a couple minutes of the climb left, he sort of petered out. Not super bad, just enough so that he was riding slower up the hill than I normally would have. I decided to just keep going “my pace” and closed down the small gap. He heard me coming up and immediately took off again. He didn’t ever stand up, he just accelerated on his seat.

I had been riding most of the time out of the saddle. For some reason, I’ve been climbing like that a lot more the last couple years. I think it might be because I’m losing either leg muscle or power as I age, but not so much Vo2, so I compensate for it by just using more muscles, which I do by climbing standing. That is just a theory, I really don’t have a definite reason other than it is easier to climb standing, a lot of the time, than sitting.

So anyway, the guy gets to the very top of the hill and slows down a ton, like really coasts. I don’t usually slow down training over the top of a climb, so just kept going by him. He sped up and road up to me and I tell him he was going pretty good up the climb. He answers something like he knew he was going good and then calls me Steve. I’m always surprised when someone I don’t know uses my name like he know me, but that is my deal.

He then asks me why I’m not wearing a helmet. He says he is concerned about my safety. I tell him I don’t usually wear a helmet training, it’s just a personal choice. I think it is kind of strange how strongly someone must feel to say something like that almost the second I meet him. He must have been pretty opinionated about wearing helmets, as most people are, I guess. I’m not very opinionated about it, either you wear one or you don’t. Anyway, that is just a sidebar.

So, we ride just a mile or so together and then he says he was turning, which I was too, but he took off like I as slowing him down, which I wasn’t. He took off doing about 25 or so, his “normal” training pace.

I’m wondering if I was just one of those guys that was kind of racing on the coast. I wasn’t really trying to show off to the dude. I just wanted to see how fast a guy like that was going to climb a hill I’d been climbing solo for a week. But, I guess each and every rider going up and down the coast has his own little reason for riding whatever speed his is going. My reason isn’t any more legitimate than anyone else’s I suppose. It’s kind of fun and frustrating at the same time, which is one of the reason I like the sport so much.

Descending down Torrey Pines into the fog yesterday 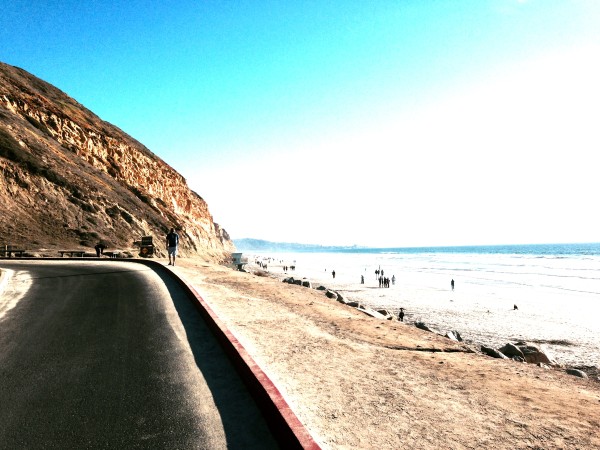 Starting up the inside road of Torrey Pines.

50 thoughts on “Psuedo Racing on the Coast”