Note to self George, don’t do interviews about doping. But, he must have missed the memo and decided to go ahead and do an interview with the Detroit Free Press that has some interesting takes on Frankie Andreu and doping in the sport.

One of the reasons that George has stayed pretty immune to the ridicule others have received, is that he has stayed relatively quiet through this whole affair. He gave his testimony to USADA and stayed loyal to Lance. I don’t think it is in his best interest to go on record and slam Frankie Andreu.

Frankie is one of the good guys in this whole mess. He got sick of lying to his friends and family, quit racing in Europe and then came clean publicly, without having to be threatened by legal means to do so, as George was.

So yes George, that does make Frankie a “better person” in this regard.

George suggests that Frankie hasn’t told his wife Betsy about all involved when he said, “A lot of what Frankie did, I don’t know if she (Betsy) even knows.” What was that statement all about. It seems like George is more pissed at Betsy than Frankie.

Okay, he doesn’t think that Frankie should have an opinion about doping in cycling because he was part of the system. That doesn’t make any sense, but I’ll let it go. But, using George’s own logic, Betsy, who wasn’t part of the system, should get to be “opinionated about it”. And she is. Very.

At the end of the article, they actually get a quote from Lance in there. He uses an example of a Dallas cowboy football player that crashed his car that resulted in a death of a team-mate. He implies that Frankie, and Betsy, need to take some responsibility for their actions.

I think that is exactly what Frankie did back in 2006 when he came clean publicly. If Lance and company would have left it alone, it probably wouldn’t have gotten to this unamicable state. Frankie lost his job at Trek, was the recipient of a smear campaign within the professional ranks of the sport and suffered some hard times. Just for telling the truth. The truth about himself. Nothing about Lance, just himself.

These guys need to quit talking so much about each other and just concentrate on their own situations. And George’s situation is that he has a book deal and owns a gazillion dollar hotel, with a world classic restaurant, which he so appropriately named 17, I assume, for his “record” 17 Tour finishes. It seems to me that he is as much in denial, and as arrogant, as when Lance tweeted the photo of hanging out in Austin with his 7 yellow jerseys from the Tour.

These guys just don’t get it at all. If they are pointing fingers, they need to be pointing more back at themselves and like Lance implied, take some responsibility for their own actions. 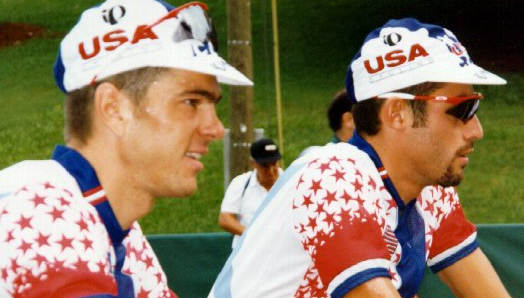 Frankie and George back in 1996, when they still were friends. 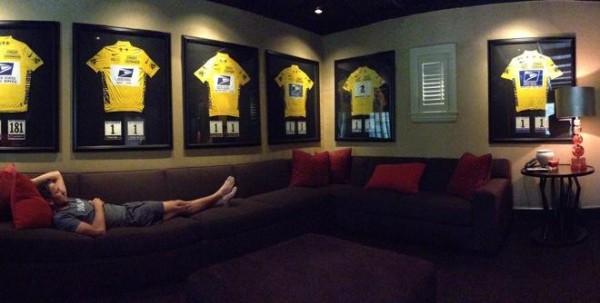 45 thoughts on ““Just because one of us stopped before the others doesn’t make him a better person.” – George Hincapie”