Yesterday I went for the first ride since I got here. And I wouldn’t have probably done that unless Vincent twisted my arm. There was a ton of stuff to still be done with the fence and weather was supposed to come in today. But I’m so glad he did. It was a rejuvenating experience, which shouldn’t have been so surprising, but nevertheless, was.

I find it so interesting how doing more physical exercise, when you’re already dead from physical exertion, can actually add energy back into the equation. I love it. I was a little worried about going out riding with Vincent here. Usually we just ride up Lookout Mountain, which is pretty much every man for himself. But Vincent gave us a choice to ride over to Red Rocks, which I jumped on.

It was a little wetter than I had anticipated. There was a lot of spray coming off our wheels, which was pretty cold on bare shins. But, I like my legs being cold while riding. I always seem to ride better when my legs are cold. I like cold water on bare skin. I don’t mentally like it much, but physically I do.

We rode along the foothills from Arvada south, through Golden and then south to Red Rocks. I haven’t ridden in Red Rocks forever. I sort of get it mixed up with Garden of the Gods in Colorado Springs. I’ve went to a few concerts there, but not recently. Anyway, it was super scenic.

When we were riding back, I noticed a highway sign for US6. It goes up a canyon to Idaho Springs. I’ve ridden US 6 once in my life. It was back in the early 90’s and I was mainly racing MTB bikes. I was living in Boulder and there was a NORBA National in Winter Park. Don Myrah and I decided to ride from Boulder to Winter Park. We rode up to the Peak to Peak, 119, and then headed over towards Idaho Springs. We coasted down a huge descent and when we get to US 6, it says No Bicycles. The road is closed to bicycles, supposedly because there are some tunnels on the road and too dangerous for riding. Whatever the reason, it was a weekday and we decided to just ride the short distance to Idaho Springs.

I don’t remember exactly how many tunnels we had to ride through. Maybe just 2. It is a short distance, less than 2-3 miles. We rode through all the tunnels and at the end there was a sheriff. He pulled us over and told us the road was closed to bicycles. We explained what we were doing and he told us we had to turn around and go back to the Peak to Peak, through the tunnels. I said we had already ridden the road and he said that there was no way he was going to let us ride on. I told him to just give us our tickets and let us go, but no. No ticket, no going on. Go back.

So the dude escorts us back through the tunnels and tells us we can ride back up 119 and there is a gravel road that goes through Cripple Creek or somewhere. It was really out of the way and we were riding a long ride already. So, we sit there and decide to hitch hike. We sat at the intersection hitch hiking, while the sheriff sat across the road watching. If the sheriff would have left, we would have just rode back again. It took a while. Maybe 20 minutes. Finally a couple teenage girls stopped in a little Toyota. They were all giggly and wanted to know where we wanted to go. We said Idaho Springs. They said it was just a couple miles. We said we knew that and pointed to the sheriff and told them our story. They said if we could get our bikes into their car, they’d take us. So we take off our wheels and jam ourselves into the Corolla or whatever it was.

The sheriff just watched. When we all got squished in and got moving, one of the girls waved to the cop and flipped him off, which I thought was going to get us stopped again, but didn’t. So, we did the 3 minute drive to Idaho Springs and pulled over in at a convenience store. Right when we were unloading our bikes, one of the girls asked us if we wanted to get some beer and go get drunk in the mountains. Don turned red and couldn’t say a word. He started unloading his bike super fast. I think he might of been a little embarrassed or something. I told them it was a great idea/offer, but we had to ride up to Winter Park and were racing that weekend, so we’d have to decline.

I’m not sure what the offer did to Don, something like the ride did for me yesterday, but the rest of the day was a nightmare for me. There is a pass from I-70 to Winter Park and Don throttled it the whole way. I could barely hang on.

I haven’t been up US 6 since then. Anyway, pretty good memory.

The fence is officially finished, I guess. Just a few rocks to move around the posts. It looks pretty good. It was way more work than I’d anticipated, but isn’t that always the case. We’re going to Boulder to have dinner at Andy Hampsten’s house and then heading back to Kansas tomorrow, I guess. But, that isn’t written in stone. It’s easy to get caught up in a new project when Vincent is involved. 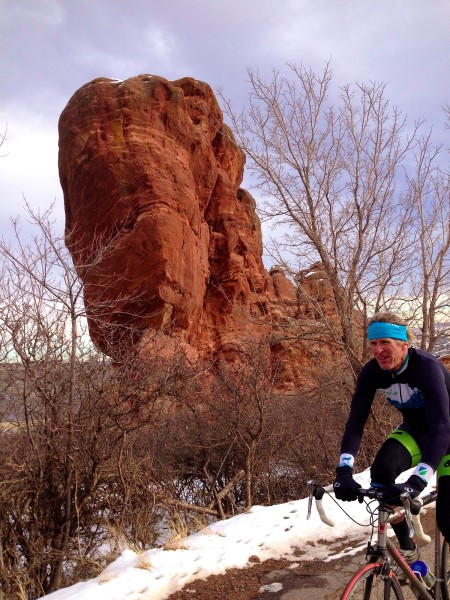 Riding up through Red Rocks was pretty scenic. 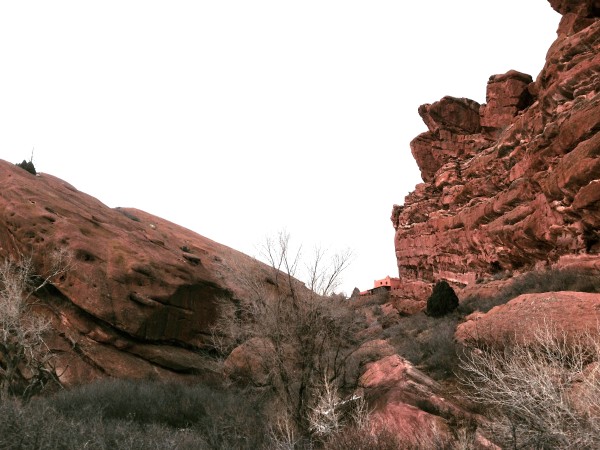 I climbed these guys when I was a kid. 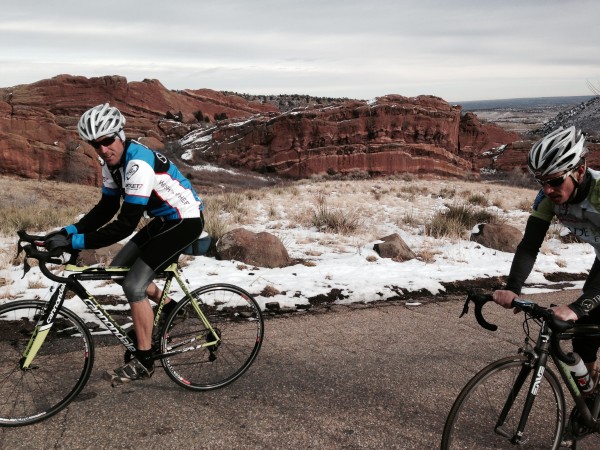 Vincent and Bill riding. I was the KOM leader for the day, even if they won’t admit it. 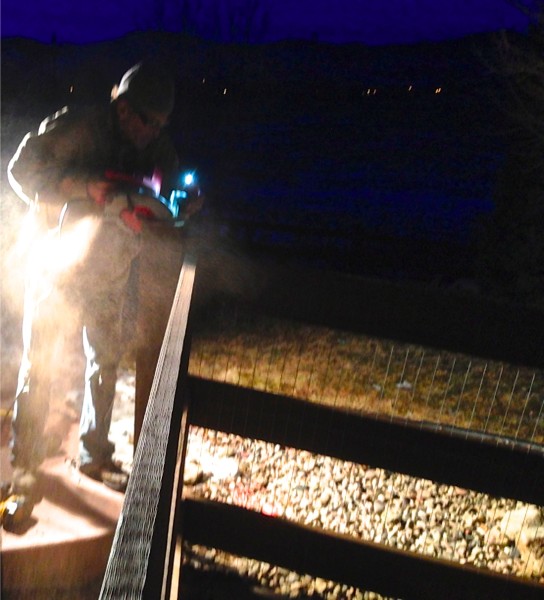 We ended up working pretty late into the night. Here is a picture Vincent took of me using the light on my iPhone to see the line on a post to miter cut it with a circular saw. Not the safest work enviornment. 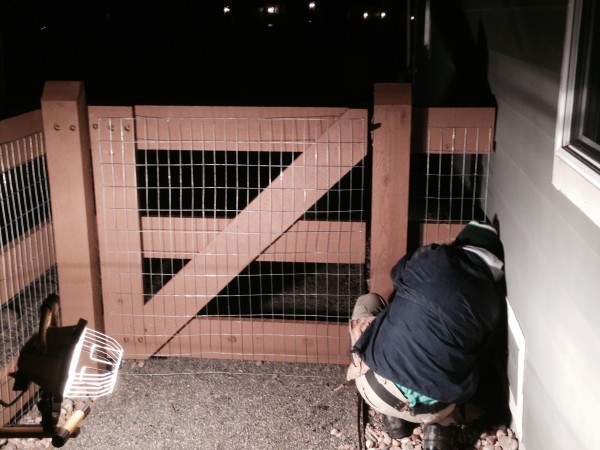 Bill putting the finishing touches on the welded wire. 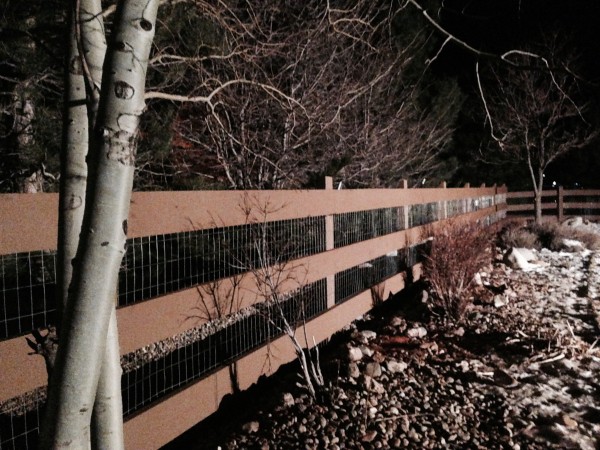 At least it is straight. 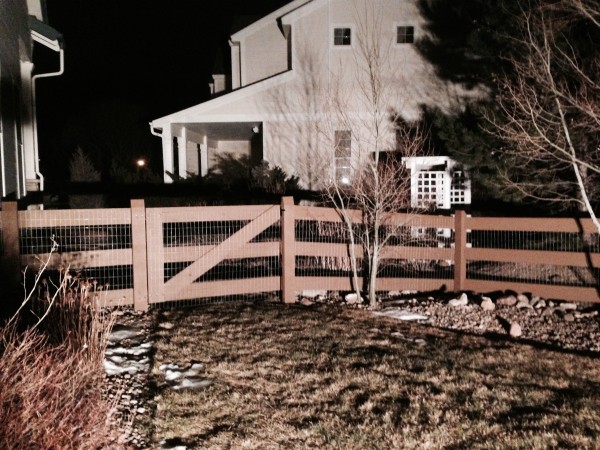