Neal Rogers wrote an article for Velonews a couple days ago about how the Pro Tour guys racing in Argentina are having to endure bush-league tactics. I thought the article was mostly likely accurate, but not really fair for picking out a few isolated instances, out of a week long stage race and saying it is beneath the level of these Pro Tour riders.

Come on, none of this stuff is new to bike racing. Team cars running into riders, riders punching other riders, riders holding onto cars on the climbs. It’s all been done for over a century, nothing new. All of these things have happened, historically, in the Tour, Giro and Vuelta. And the only reason it doesn’t happen now, or isn’t reported now, is because of the popularity of these events, thus a much, much higher chance of being caught. It still happens all over the rest of the world.

I’ve seen guys hold onto vehicles all over the world, South America, China, Europe, and the United States. I was passed up a climb in the Coor’s Clasic by two cars with 5- 10 riders holding on. Bob Roll went by the whole groupetto, on the road to Squaw Valley, in the Coor’s Classic, holding on to a highway patrol motorcycle going at least 60 mph. He finished minutes ahead of me. I thought it was pretty bad etiquette at the time.

The best I ever witnessed was racing in Shanghai, China a Mongolian rider passed me on a flat open stretch, going about 50 mph. He was holding onto the rear wheel well fender, down low, on the opposite side of the car of the caravan and officials. There is no way he could have been spotted. It was brilliant. But, still cheating.

And cheating is cheating. I think it is strange that people, including the media, think that holding onto a car up a climb is a worse offense than taking EPO or other drugs to go faster up the hill. In my mind, both get the rider from the bottom of the hill to the top, much faster than he would have otherwise. Tell me that there weren’t Pro Tour riders competing in that race that aren’t currently doping. I think not.

In the Velonews article, it quotes Taylor Phinney as saying – On stage 1, when the breakaway stayed away, we were all sprinting for seventh place, I was just kind of sitting back, watching these [local] guys taking massive risks in front of me to sprint for seventh place.

“I understand that this race means a lot to them, but it gets to a point where you have to ask: Is it worth it for us, as pros who are trying to build up for bigger races, to come here, to take big risks in preparation races by being involved with riders who can be quite dangerous?”

I don’t get it. There are always guys willing to take risks for a result. Taylor said it himself, “it means a lot to them”.

I just looked at the results from that stage and Taylor finished 14th, so 7th in the field sprint. And there are only Pro Tour riders, from Europe and the US, ahead of him, other than Luke Keough, who rides for Unitedhealthcare.

Taylor didn’t have to participate in the sprint. He could have just sat back and watched the “local guys” take these massive risks and made sure he would be fine for the “bigger races”.

In fairness to Taylor, I don’t think he was really calling these guys out seriously. I think they needed a quote for the article and just put this in to back up the premise of bush-league racing.

Obviously a lot of guys felt like field sprinting. And why wouldn’t they. Don’t they field sprint when there is a break away at virtually all races. And in field sprints, some guys take what others consider unreasonable risks. It is once again, just bike racing.

Anyway, all races aren’t the Tour. And the Tour isn’t really any different than a local race. It is just much, much more important. There are much more risks taking and much more of just everything, happening there. And it is justified, because of the importance. But for riders that have virtually no chance of ever riding the Tour de France, this was their Tour and they did exactly what the Pro Tour guys do when they deem importance. They took risks, they cheated, they punched their competitors, etc. When Mark Cavensish does something stupid, it’s just fine because he’s Pro Tour. When Joe Blow, South American does exactly the same thing, it’s called bush-league. To me, it all just bike racing. 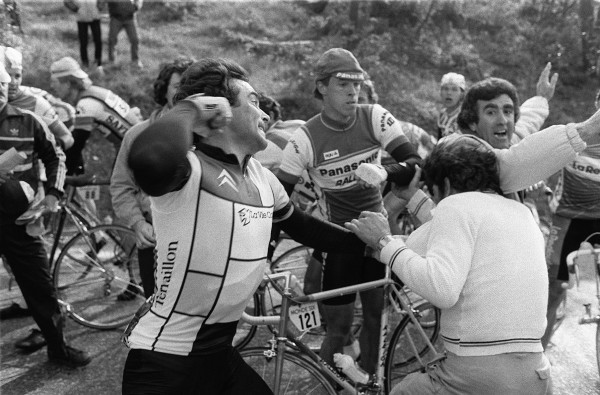 At least the riders weren’t punching the spectators. I love this photo of Bernard, with Phil Anderson watching in the background. 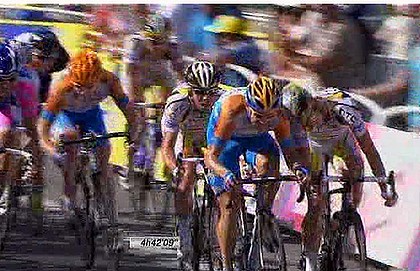 And, how about a little head butt action from the Tour.