Today is the 30th anniversary of the Apple Macintosh computer. It was back in January of 1984 that it originated. Man, how time flies and things change.

I’d say the biggest change in my lifetime is how small the world seems now because of computers, the internet and smart phones. I couldn’t have imagined the direction of it all back during the Olympic games in LA, in 1984.

The information that we have at our finger tips, at all times, is unlimited pretty much. Anytime I need an answer to virtually any question (a question that has a definite answer), I have it. Much of this is because of Apple and its products.

I’ve been an Apple fan for a long time. I don’t come close to using their products as they should be used. I barely tap the fringe. Each one of my Apple products have the ability to do 10,000 X as much as I use them for. That is the beauty of their products, they are very user friendly for pions like me and also for researchers, designers and artists that are on the cutting edge.

I couldn’t even have imagined 10 years ago that any of us could be sitting at home, eating breakfast, watching World Cup Cyclocross from Europe, live on our laptops. Or virtually any other event in the world that has video coverage. It is truly amazing. We can even watch on our phones while on the move. Unbelievable.

I started buying Apple stock a long time ago. I made the decision by making observations during travelling to races. Years ago, when I went into a coffeeshop before a race, there would be maybe one Mac laptop to 10 windows computers. I noticed a very slow, but definite increase of little Apple symbols on the laptops, month by month. I realized that way more students were then using Apple computers than previously. So I bought some stock. This was way before the iPhone.

The iPhone was obviously a game changer for Apple, the company. Nearly all their profits are derived from this one product. It is what defines the company now, the Mac took a back seat to them.

Monday, Apple is going to announce its 4th quarter earnings. They are going to be record earnings most likely. Maybe not record enough to make the institutional investors happy. Apple is not a loved stock by many right at this moment. But, they are hoarding an enormous amount of cash. I saw an article last February that said Apple had enough cash in the bank they could acquire Facebook, Groupon, LinkedIn, Netflix, Pandora, Research In Motion (Blackberry), Yahoo, Yelp, Zillow and Zynga —and have more than $2 billion left to spare. Of course the dynamics of all those companies have changed in a year, but they are still sitting on a huge stockpile of money.

Anyway, it has been an interesting journey for Apple. We’ve all benefited from their innovations and focus. Hopefully they will continue with these things into the future. I can’t come close to imagine what they’ll be doing 30 years from now. 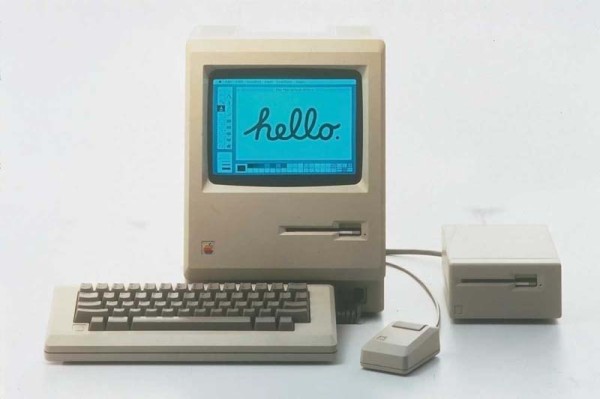 The original Macintosh from 1984.

A rendition of Apple’s futuristic campus.