Topeka is a nice place to live. It is very convenient for riding, close to an airport and has pretty great weather, most of the time. But compared to a lot of places, it is fairly poor. At least it has a big area of neighborhood blight and crime. I’m not exactly why. I think it might go all the way back to the civil war when Kansas was a free state and Missouri was a slave state. That’s my own theory, but whatever the reason, a fair number of poor people ended up settling in Topeka, the Capitol City.

When cities have blight issues, the regulations, charges, etc., need to reflect the mindset of the people that they most affect. Penalizing or charging people for trash disposal is an issue of mine. When cities/counties start making special charges or exceptions for certain items, tires, tv’s, etc. then it is going to create a problem of people dumping them where it is free. That is just about anywhere. Topeka charges $2 for tires. I’ve personally moved 1000’s of tires. And I see them everywhere. I’m sick of it. The city needs to come up with a way to track new tire sells because an average household doesn’t have 50 tires sitting around. Many of the tires are being dumped by small tire companies and service stations.

I’m writing this now because I’m having a problem, once again, with some property I own in Central Topeka. It’s a fairly long story, but I have a 13 acre piece of land right in the center of town. It is a nice piece of property in a bad area. When I got the land, it wasn’t secure and many people used it to dump their “extra” stuff. Bill, Trudi and I spend a month moving close to 3000 tires out of a seasonal drainage stream. We just had to drag them up and stack them and some prisoners came and moved them. The prisoners got to keep the money from the metal from the steel, the rims, and the tires went to a facility to make playground cover. It worked out pretty well.

There were two semi trailer trucks on the property. I called around trying to get someone to move them, but the poor ecosystem took care of it. Last year, I went by the property and the chain/cable was gone, once again. I’ve replaced it dozens of times. I went into the property and the semi trailers were completely gone. Tires and all, which was nice. I’m sure the guys that cut them up got a fair amount of money for recycling the steel, $1000’s of dollars, which is fine by me.

Now my issue is dumping again. It is nearly impossible to keep people from getting in. They seem to have all the tools necessary to get through any thickness of chain or cable. I received a code services letter from the city about removing a desk from the property. I knew that was a bad sign. I went over there yesterday and saw few pickup truck loads of trash laying there. Empty paint cans, tv’s, clothing, and trash.

There are a lot of letters with addresses, but I”m not going there. There are so many ways people’s stuff could end up here. Someone evicted and the landlord dumps their stuff. A guy driving around cleaning houses and then illegally dumps. Lots of ways. Anyway, I’m sick of it.

I went down to a recycling place yesterday and got two long pieces of galvanized steel. My plan was to dig a 3-4 foot post hole, put one in, set in concrete, and then slide the other one over the top, secured with the beefiest lock I can find. I hit a snag with the ground being solid limestone. I’m working on “drilling” a hole now. I’m not exactly sure what I’m going to use. Maybe a core drill, hammer drill, jack hammer, something. All I know, from past experience, that once the dumping starts, it accelerates at an unbelievable rate.

Back to point. Cities need to understand the consequences of their fee schedules. When you charge poor people to get rid of trash, the trash isn’t going to make it to the landfill. It is going to be dumped in ditches, along bike paths, and on unoccupied property. Then it becomes society’s problem. I can’t imagine that the city collects enough money from their fee schedule to make up for the amount of garbage they have to clean up themselves. Not even mentioning private land owners.

I hate people that pollute. There are lots of ways to pollute, dumping garbage isn’t the worst. But it stands out in your face. I really don’t like cleaning up other people’s trash. But, I’ve done more than my fair share of it. I would be a horrible garbage man. Seeing humanity through other people’s trash gives me a bad glimpse into an ugly side of mankind. 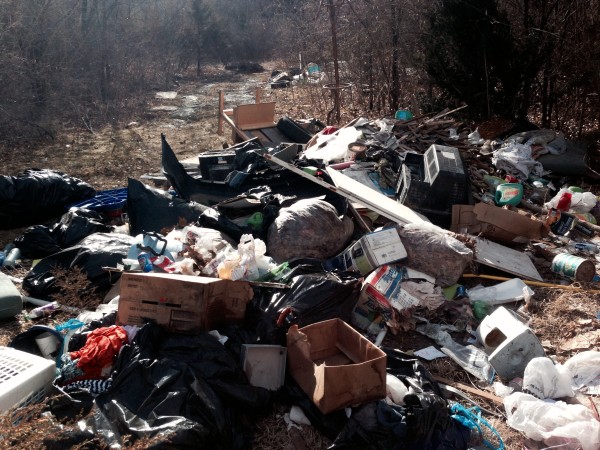 My pile of trash.  It took pickups trucks full.  And they bring it as fast as I can remove it. 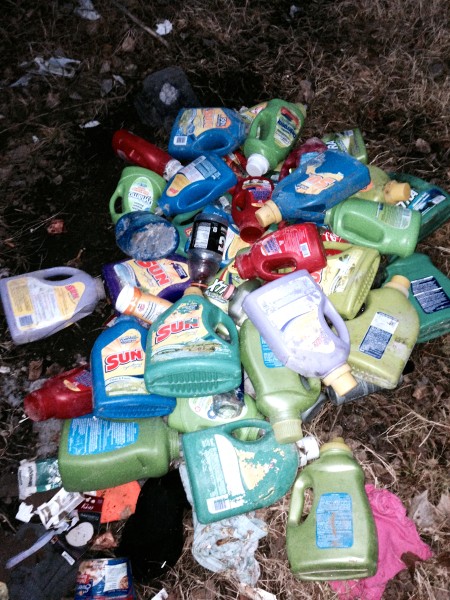 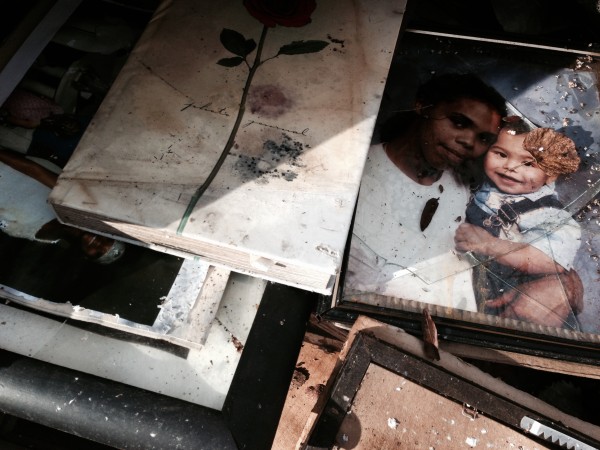 Some family photo albums. It is so sad really. 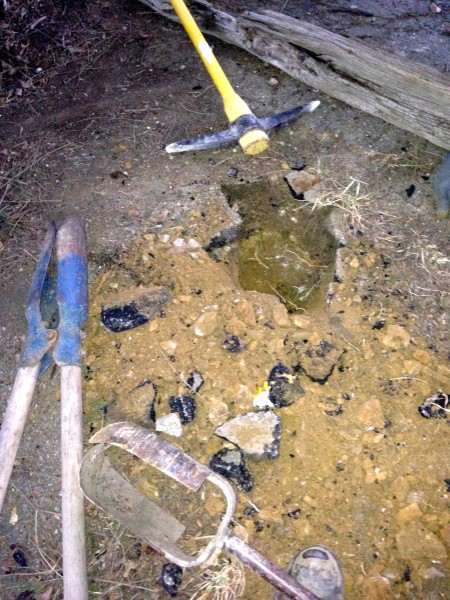 I didn’t get too far before hitting solid rock. 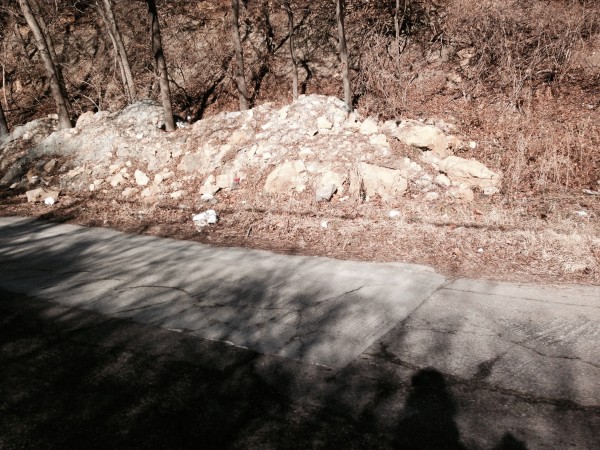 This is a road repair done a couple years ago across the street from my land. Pretty nice way to dispose of the extra rock and concrete, huh? Even the city pollutes in the poor areas. 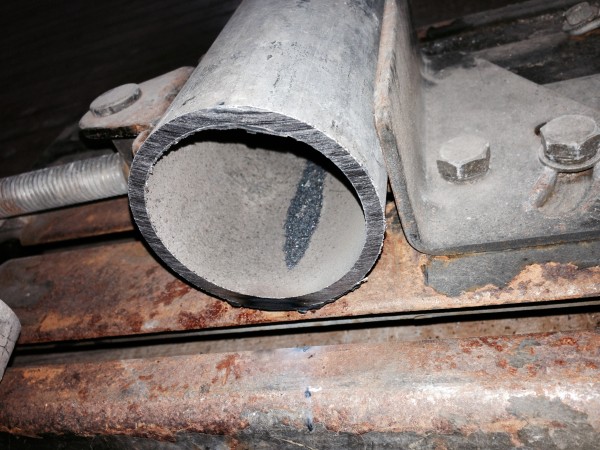 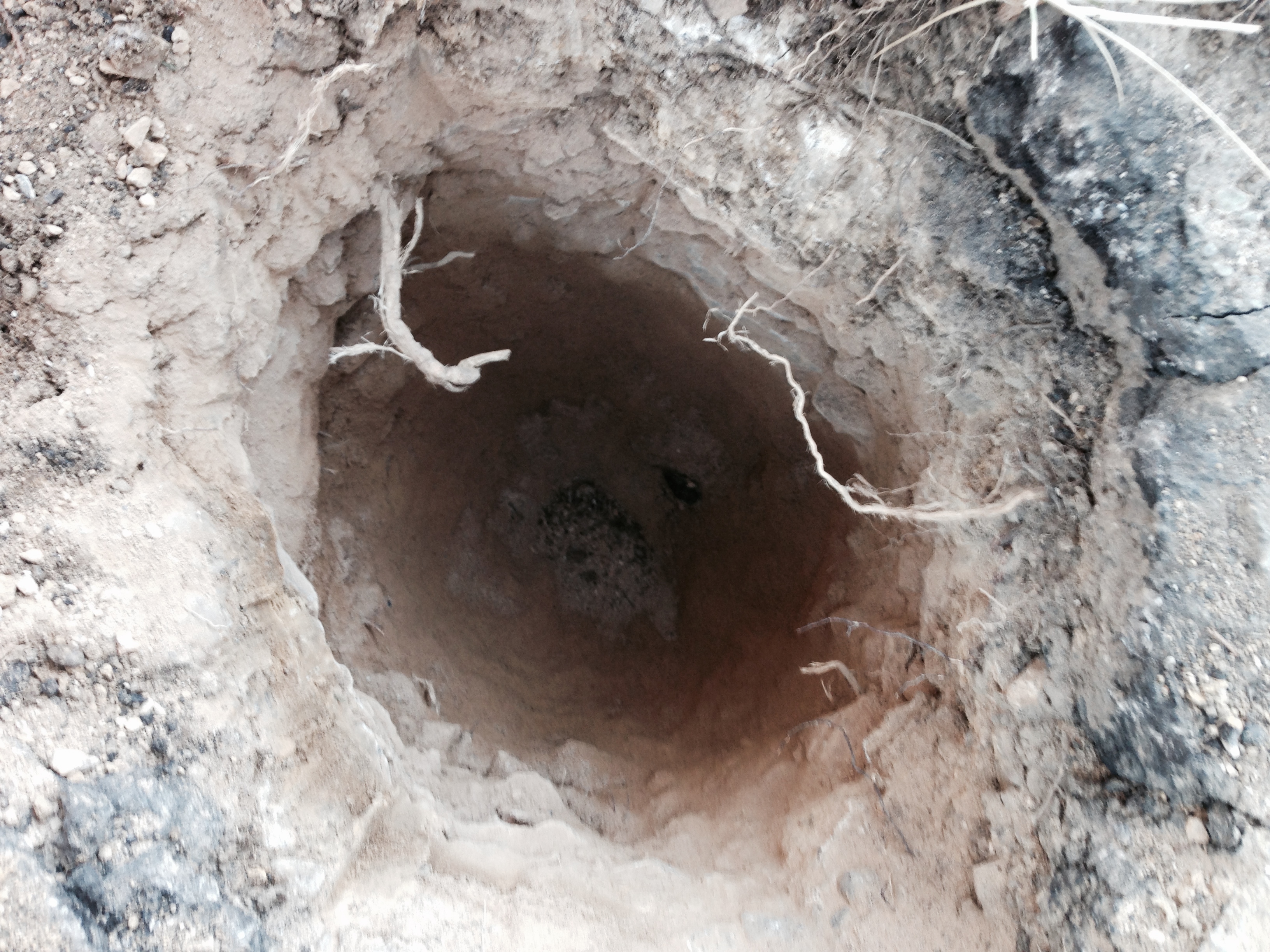 Took me four hours to dig this one hole manually. 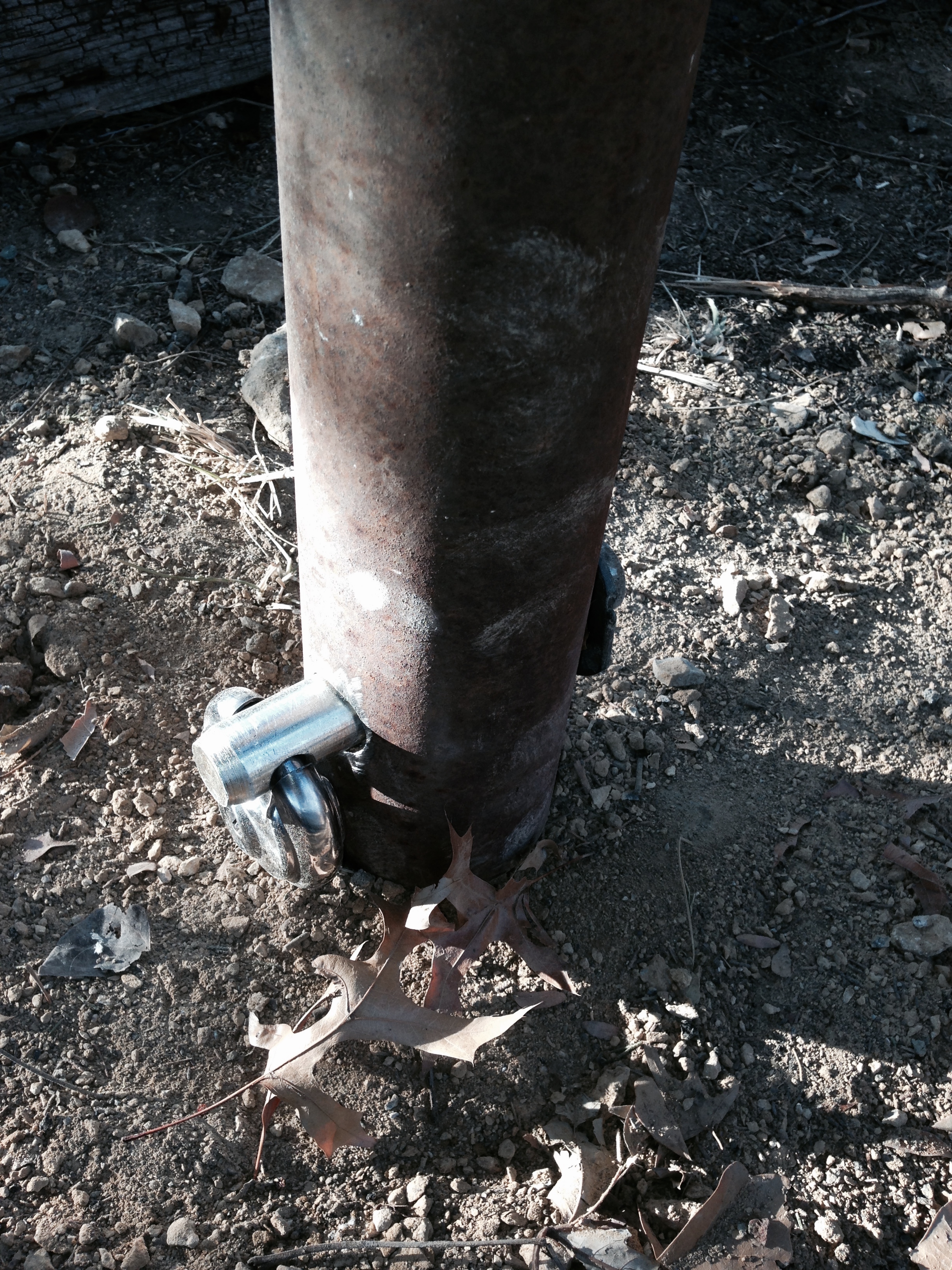 Not sure this is going to stop the dumping, but it’s the best I’ve got right now. 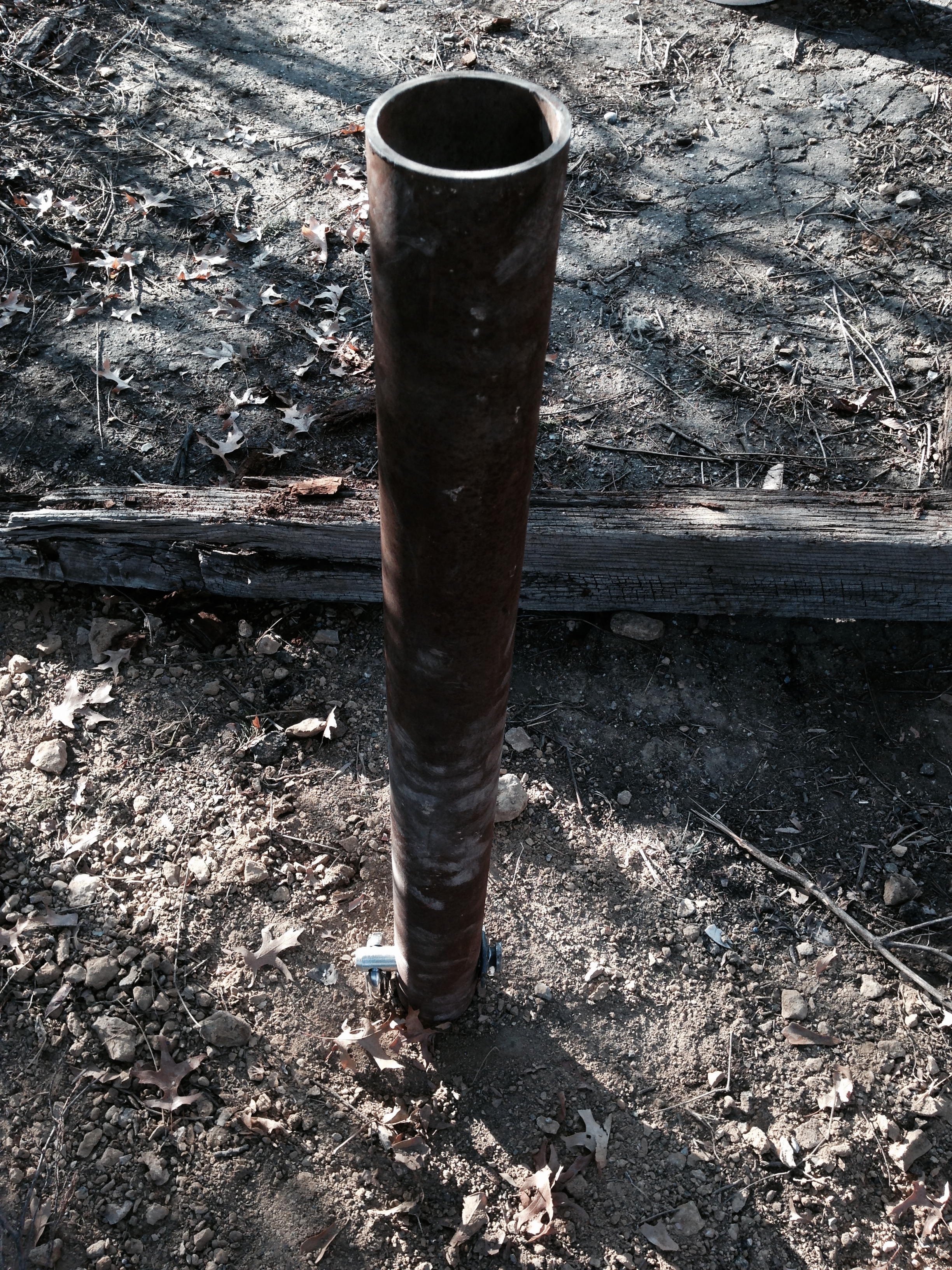 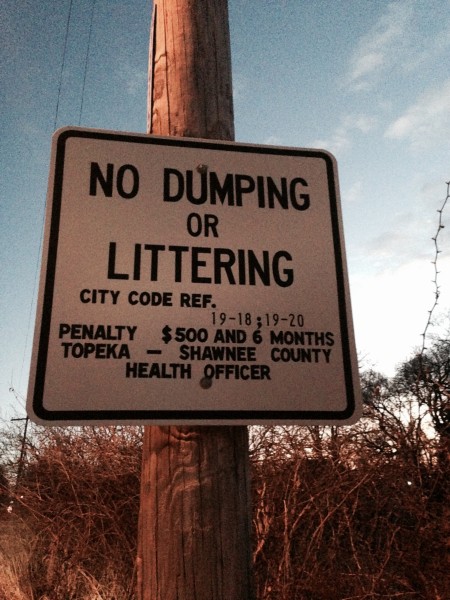 This sign down the street doesn’t seem to be scaring anyone off.