I’ve skied over the high point of the Birkie course 4 times now. I did it again yesterday, instead of snowshoeing out to the bear den. Up at the top, there is a sign and a big rock, that is now, covered with snow. Right here is where I helped spread the ashes of a friend, Harold Lundgren.

Harold was an interesting guy. First and foremost, I think he would like to be called a cyclist. And he was. But he was much more. He was a friend, a farmer, a brother, and just an all around good guy. And by good guy, I mean the type of guy you could depend on for just about anything. He was a guy you would trust your most secret, secret, or your life. He was that kind of guy.

I met Harold while riding for Michael Fatka. He was one of the original Iowa guys riding on the Raleigh team. He was going to Iowa State and into cycling. I didn’t know Harold that well initially. I got to know him better through the years. Harold wasn’t the best athlete, but he had heart. He would suffer like a dog racing, but I never heard him complain once. He loved the sport.

I have a million Harold stories. I could go on for days. Once, he drove the 45 minutes down from Ames to pick me up at the Des Moines airport. When we got back to the shop in Ames, I couldn’t find my DayRunner, an organizer book, sort of equivalent to a cell phone nowadays, I guess. I thought I’d left it at a pay phone at the airport because I’d been making phone calls while waiting for my bike. Anyway, I tell Harold I have to go back to the airport to get it. He says he’ll drive me in the team van that he picked me up in. We get back to the airport and I go to the payphone and it isn’t there. Then I go ask at lost and found and it hasn’t been turned in. I am bummed. I get back to the van and on the floor, under the passenger seat, is my DayRunner. I am so embarrassed. I apologized to Harold, because he had spent and hour and a half to go out of his way driving me roundtrip to the airport for nothing. He is quiet for a second and then proceeds to thank me for letting him drive me. He said that he couldn’t think of a more enjoyable way to spend time, with a friend, just talking. He said it was the best conversation that he could remember having. It was so nice.

Harold had bad frostbite on his face. The first year we skied, people would stop us all the time and tell him that he needed to go inside or go to the hospital. I was used to it by then. His nose and cheeks would turn white everytime we skied below zero, which was often those first years. He had spent a lot of time outside, farming, in the dead of winter, in southern Iowa, along the Missouri border. It was a hard life. A lonely existence, but he loved it too.

After graduating, Harold moved back near home and farmed. He did that for a couple years, then eventually moved up to Ames and started working for a parent seed company. They made hybrid seeds and Harold would travel around the Midwest and plant and tend to them. He never stopped riding his bike, though.

In the early 90’s, Michael Fatka was cross country bike touring. I think he was riding his bike from Oregon back to Iowa, but I’m a little sketchy on that memory. Anyway, Michael was only a few hours from Ames, so Harold decided to ride out to meet him. Harold was riding out west of Ames, on a paved road, when he was struck, broadside, by a car. It was a kid driving on gravel, in high corn. He didn’t see the stop sign, or it was covered up, but for some reason, he went right through it and struck Harold at full speed. It was just bad luck and an accident.

I got a call from Michael that night telling me that Harold had been hit by a car and that he was in the hospital. I told Michael that I was on my way up. He said that no one was allowed to visit other than family and said I should wait a couple days. I thought that sounded okay. I was surprised when Michael called and said Harold had died. I guess he was pretty much dead on impact, but was still alive enough for his family to donate his organs to others. I couldn’t believe it.

A few days/weeks later, his parents and his sister, decided to hold a memorial service at Iowa State. Harold had been cremated, but they thought that it would be nice and expected a couple dozen of his friends to get together to pay their respects. But it wasn’t a few dozen. It was 100’s of people. His first college roommate, just for a semester, flew up from Florida, I think, and told a life changing story that Harold had helped him through. Person after person stood up and all had their own account of a life changing situation that they consulted with Harold and followed his advice. It was unbelievable.

Harold’s sister told about when she became pregnant and had decided to have an abortion. Harold supported her decision, but told her that it was really up to her to decide, not their parents, her friends, or others, to make this all important decision. She, and Harold, decided that it would be best to keep the baby. And that it was the best decision that she had ever made. And this wasn’t even the most moving of the stories.

Harold’s memory service was a reflection of the impact that he had made on others. I have thought from that point on, that someones death, funeral, memorial, really mirrors or shows the importance that they meant to others. I think that many people would live different lives if they had the ability to see their funerals years before they died.

A few months later, I skied my first Birkie. I skied the race wearing Harold’s bib number. The day before the race, five of us, Michael, Trudi, Pete Caron, Paul Biskup and myself, skied up to the high point with a small film canister of some of Harold’s ashes. His parents had given them to Michael and told him that Harold had told them that it was one of “his” places. We were at the top of the high point, a sunset, on freshly groomed corduroy.

Michael opened the canister and poured a small amount of the ashes into each of our hands. It was the only time I’ve ever actually touched human remains. It wasn’t like I had imagined. It was more like course, ground up bone or rock, not dusty ash. I put some between my thumb and forefinger and rubbed it together. I couldn’t really comprehend that this is what became of us.

Each of us said our own little prayer for Harold. I thanked him for being my friend. Maybe my most loyal friend. I skied out of the 3rd wave the next day and qualified for the Elite wave, top 200.

I don’t have a picture of Harold here. I’m sure I have some at home, on film. Maybe someone out there has one that they could send me and I’ll post it.

Harold’s death made me a better person I think. I think I took Harold for granted. I didn’t realize how important he was to me or how special and unique person he was until he wasn’t around any more. It makes me feel bad I didn’t ever tell him how much he meant to me. But, I think it’s okay. Harold was the type of guy that could tell how people felt about him. He was a true friend. 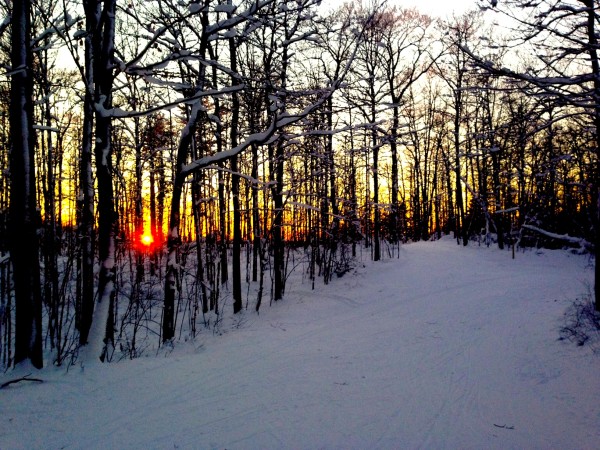 Sunset yesterday from the high point on the Birkie Trail. 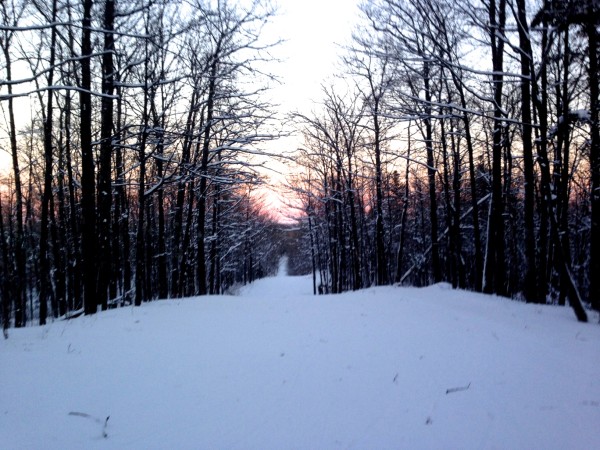 Looking North, down the trail from the high point. 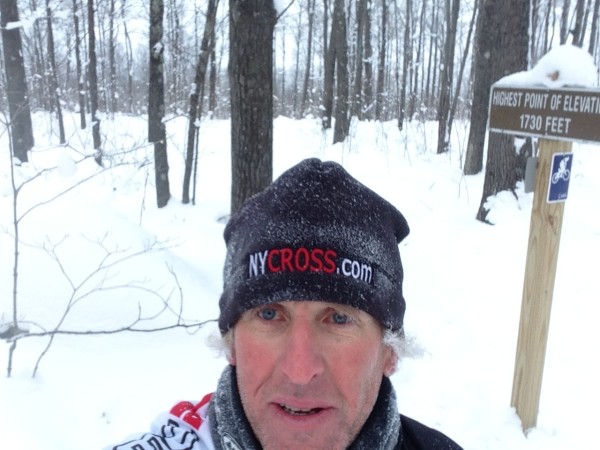 You can’t really see it that well, but over my shoulder, opposite of the sign is a rock covered with snow. That is what I consider Harold’s rock, I put his ashes there. I have a little personal conversation with him each time I ski over the hill.