Cycling has a ton of attracts for me. But, one perk that most riders don’t take into consideration is the endurance it gives us all in other areas of our lives. I guess I mean physical endurance, but I think the mental aspect transfers over too.

I just got done with 3, 15 hour days trying to finish up a project before the holidays. I worked until 2 or 3 am each day and woke up before 8 to start all over again. And I’m not destroyed. Don’t get me wrong, I’m tweaked some, but not like I would have thought. I did the same thing a few years ago when I roofed my building. I put in 16 hour days for nearly 2 months straight, with little sleep. I wasn’t great at 5 am, but after I got rolling, I was fine. It’s a nice thing to know you can do.

The same goes for other physical areas.. Back in the late 90’s, I was racing in Japan with Specialized at a Catus Cup. We were going to go back to Tokyo after the race to go to the bike show. I came up with the idea that we should hike up Mt. Fuju, even though it was October and it was pretty much shut down. The top was covered with snow and ice.

Anyway, we convinced the Specialized Japan guys to take us there to hike up it. They said yes, but they never said no, and they meant no. So, on the way to Mt. Fuju, Tech, the Specialized guy, took us to a super cool hotel that had an indoor water park. Plus, that night at dinner, he ordered tons of wine. We were all toast. This was in his grand plan to make it so we didn’t die “climbing” up Fuji.

Tech had to be back in Tokyo early afternoon, so he drove us up to the tourist area, a few thousand feet up the mountain, and left us. We were way late and Tech explained that there is no way we had enough time to get to the top. Plus, the weather. He’d asked around and no one went to the top at that time of the year. We grabbed some Powerbars, made a couple sandwiches and took off. It was Ned, Trudi, Kris Burchard (Marketing director of Specialized) and Ned’s brother. Kris and Ned’s brother were pretty fit for normal people. But, not fit enough to keep up with us on our schedule. Trudi, Ned and I had a little pow wow and decided we needed to jettison those guys. So, when they caught back up, we told them we couldn’t wait, gave them their share of our food, and took off.

It wasn’t easy. It was super cold, the wind was howling. Plus, it was icy and snowy the top 1/4. Normally, it is a walk up. I think in the summer, there are days when over 10,000 go to the top on a single day. We were the only ones that day, maybe that week, maybe the month.

We made it to the top. It was hard because the trail was up the shaded side, which was, like I said above, pretty treacherous. Once on the top, we got sunshine and warmth. Plus, there wasn’t much snow. We pulled out our Specialized banner and took a photo, then headed back down a different trail.

The downhill was our undoing. Well, not all of ours. Trudi was struggling up. I had her grab ahold of the waist of my jeans, while I short-roped her the last bit. I was worried about her slipping and sliding 1000 feet down the mountain. But once we started down, she was stellar. And Ned and I completely fell apart. Nearly at the bottom, both Ned and I couldn’t walk down anymore. We had to turn around and walk backwards. It was loose pumice and it wasn’t that easy.

We hooked back up with Ned’s brother and Kris and caught a bus back to Tokyo. The next week, walking around Tokyo, neither Ned or I could even step off a curb. Our thighs were prety destroyed. But, our cycling fitness got us up to the top when normally it wouldn’t be possible.

There aren’t too many sports that allow participates to exercise for as long as cycling does. Cross country skiing is one. Hiking I guess, if you count that as a sport (Nothing against hiking). It is one of the best fringe benefits of the sport. And it transfers to many other things, like marathon construction. It’s great. 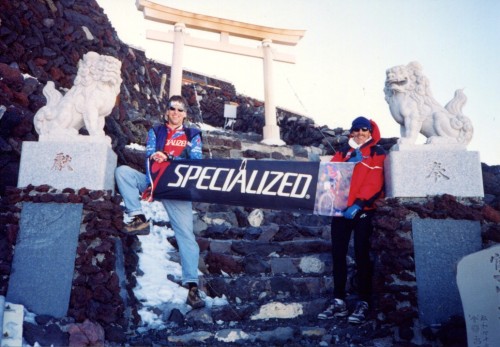 Near the top of Mt. Fuji, flying the Specialized colors. 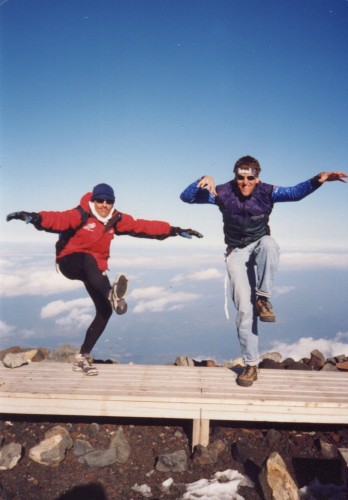 Ned and me doing a Karate Kid imitation. 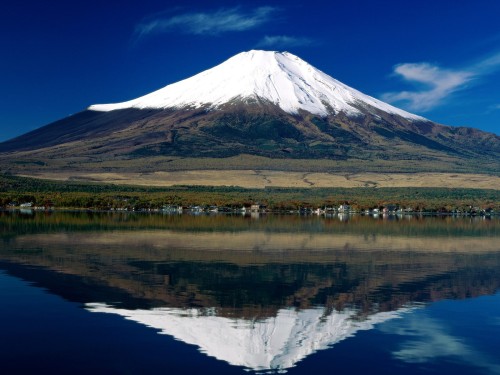 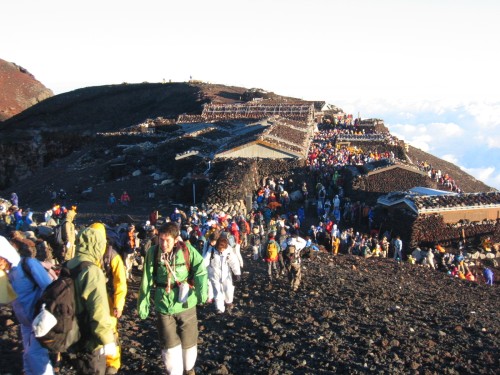 7 thoughts on “A Big Perk of Cycling”