Don’t really have that much time this morning, so I’ll just do a short recap of the race yesterday. I finished 39th, which is the worst I’ve ever finished in a cyclocross in modern history. Even starting 100 guys back in Nationals I’ve finished better than that. But, it’s fine. I didn’t have any illusions about how I was going to finish. I have done nothing to really prepare for the efforts needed in cross. I’ve only race twice in the last 3 months and both of those races were long MTB races.

I didn’t get such a bad call-up. I was 42nd. I thought the start went pretty well, I passed a big chunk of guys early, but by the time I got to Trudi, at 1/2 lap in, she said I was in 40th. That was surprising at the time. I would have guessed I was close to 30th. Anyway, I can’t pinpoint anything that really went that badly. I was just sort of bad at everything. Not close to up to speed on anything.

Anyway, after two laps, I was 2 minutes back and realized that I was going to become a casualty of the 80% rule. It is hard putting much effort into a bike race when you know you are going to get pulled. I still tried to improve and ride smoothly, but was doing a pitiful job of that often. I was pulled when the leaders had one lap to go, so I had two.

I didn’t feel that bad riding. My lungs hated it the most. I was coughing up stuff for a while after. But, other than that, I was just slow.

The battle at the front was awesome. Ryan Trebon and Jeremy Powers changed leads two or three times the last 1/4 lap. It was an exciting finish. Should be just a good today.

I hope to do a little better today. I need to make a bigger effort at the start and not get stuck riding around with slower guys at the start. I guess it depends on my random number draw. Okay, I need to get going. 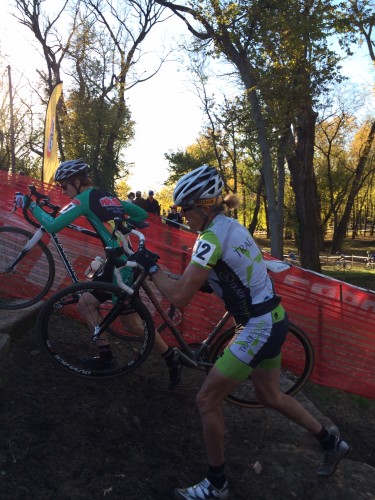 Not too sore from running yesterday. 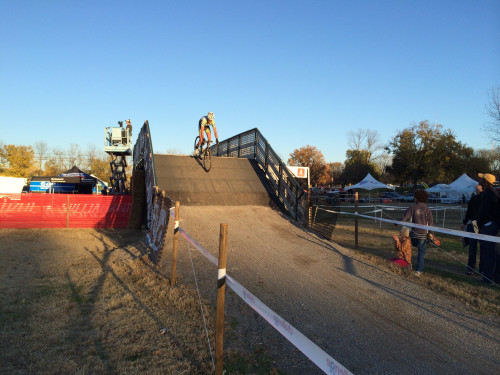 Lonely on the fly-over.

One thought on “Louisville – DAY 1”