Lance seems to be emerging back into the public through some media interviews. Not complete candid interviews, but snippets that really skirt the meat. I was reading this interview that Lance did with Cyclingnews.com. It was the same old until I got to this quote-

And I don’t want to just talk about doping. It’s obviously an element but 99 per cent of my career isn’t about doping.

I think he totally believes this. From my perspective, he has a complete warped reality.

I was talking to a friend last week about some of the doping stuff. And he told me he had talked with George Hincappie about Lance. He said that George was “defending” Lance, saying the guy (Lance) trained harder and was more focused than any other rider he’d ever met.

I reminded him of the Outside Magazine article about that guy that was training for Paris-Brest-Paris and started on a systematic doping program. His quote from the article is –

After the EPO kicked in, I rode a 200-miler and I felt strong, fresh, ready to hammer. The next day I easily could have ridden another 200.

So, here’s an “amatuer cylist” training for a long race/tour and he said the recovery is beyond belief. I obviously have never experienced, but have to believe what everyone says.

I would love to get on my bike today in La Jolla and ride the 65 miles over to Mt. Palamar and do a couple repeats and ride home. And I’d love to be able to do it again tomorrow. But, I can’t. But, Lance could. He could go and pre-ride stages of the Tour each year and do repeats on the hardest climbs in the race.

What 1% part of his career is that? What doesn’t George understand about the advantage that gives Lance? If anyone understands, he must, because he was pretty much on the same level. So George must have thought that just because he didn’t have the want to go ride and plan and organize his complete life around one race, that Lance must be so special. It is all about the personal acceptance and the justification of his/their actions. George had this underlying respect of Lance just because he didn’t possess his traits.

I’m curious if these guys wonder often how good of athletes/cyclists they really could have been? 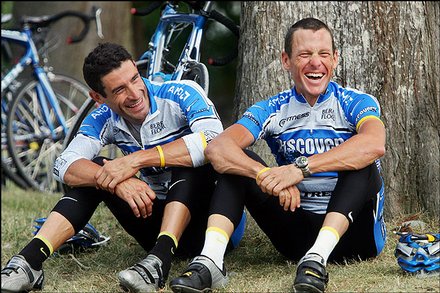 Lance and George all giddy, probably after their 7th day straight of 250 kms. Fresh as daisies.