Last year I remember reading this article at Velonation, where Taylor Phinney was being interviewed and he said that he never used finish bottles. I had no idea what he was talking about initially, so I spent a little time looking into it and it amazed me that some/many/most/all (you choose) of the Professional teams have doctors mix up special water bottles that contain caffeine, plus tramadol. They call these finish bottles. If you’ve never heard of tramadol, it is a centrally acting opioid analgesic used to treat moderate to moderately severe pain.

I didn’t feel that I had enough information to post something hear about it. But, Cyclingnews.com did an article a couple days ago about the problem and it stated “WADA has also confirmed that a ‘significant’ number of tests have shown traces of the drug.”

The article goes on to interview Prentice Steffen MD, the head physician at Garmin-Sharp. Prentice confirmed the Garmin’s team use of the drug, but they seem to have come to a consensus when to use it.

“We’ve had a lot of discussions about it with many of the riders on the team and Jonathan [Vaughters] and I. We arrived at what we think is a reasonable and sensible approach, which is that it’s not banned and it’s a drug like any other so it has approved usages, but all medication is to be used to its appropriate indications. So we’ve said that a hard day in the saddle is not an appropriate occasion for the use of tramadol. But if they have a painful condition and pain medication is appropriate, we think that then it could be reasonable. I don’t like it, I think we can get by without it.”

Asked if he believed that riders in the professional peloton were abusing the use of tramadol in order to boost their performances, Steffen gave an unwaveringly clear response.

“Absolutely. I know it’s a problem. It’s not a big performance enhancer but it could make the difference of a fraction of a per cent. It’s like nothing compared to EPO or blood doping but it’s more on the side of cortico-steroids. If blood doping is a ten then it’s a two, maybe.

“I can imagine it being used for training. Anything that makes an intense effort or suffering more tolerable is going to give you a training advantage.”

In Velonation article I referenced above, Taylor says, “There is widespread use of finish bottles, which are just bottles of crushed up caffeine pills and painkillers. That stuff can make you pretty loopy, and that is why I have never tried it. I don’t even want to try it as I feel it dangerous.” So he pretty much confirms that if he would like to “try” the finish bottle, it would be at he disposal. So that is two “American Teams” that use finish bottles.

I remember last year in the Tour, when Chris Froome took two bottles with less than 10km left. (It might have been 2 years ago with Wiggins, my memory is fussy.) For sure last year, Richie Porte took a bottle illegally and gave it to Froome. I never could understand how that could make a difference so close to the end of a race, but this whole finish bottle thing explains a lot.

It sort of reminds me of the 90’s, with ‘Pot Belge’. I think the ingredients fluctuated some, but the main ones were caffeine, amphetamines, cocaine and heroin. I remember reading a excerpt of a French rider that had been busted and he said that the first time he tried Pot Belge was in Laurent Jalebert’s garage at a team party. For some reason that seemed so much worse. It doesn’t seem like you should be using the drugs you use for athletic competition when you are just out on Friday or Saturday night partying.

But, I guess the difference is that tramadol isn’t banned by WADA. It is kind of a tricky thing to get your mind around. Instinctually, it just feels all wrong. Taking an opiate to race. Especially if you aren’t hurt and are just doing it to mask pain. But, where do you draw the line? Is ibuprofen different? Aspirin? I’m not sure. I would be sure if WADA banned the drug for use in competition, which I believe they should. But, most likely, there is just another non-banned drug that acts very similar to tramadol that would replace it instantly.

I guess it really isn’t such a big deal anyway, because of Prentice Steffen says above, it really doesn’t provide that much more than just taking cortico-steroids.

It sort of seems like a losing battle sometimes. 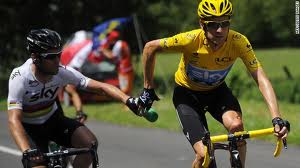 Maybe it’s just water in the bottle, who knows.

21 thoughts on “Racing on Opiates”