Bicycle riding has stayed pretty constant over the decades. Of course the introduction of the aero position by Scott was a big innovation and position change, but other than that, it hasn’t changed too much.

But, yesterday, watching the U23 Worlds I saw something that I’d never seen, a pedaling tuck position. I hated it.

I hated it so much that I didn’t want Matej Mohoric, Slovenia, who won the under-23 world road title, to make it to the line alone. But, I also didn’t want the South African kid that finished 2nd to win either, so I was never going to be good with the podium.

I’ve descended a lot of different ways. I’ve tried about every way that you can imagine to go fast downhill. The sitting on your top tube position just plan sucks. It is a very unstable position, putting much too much weight on your front wheel, with bad control of your bars. Then you add into the fact that Matej was pedaling while in this position and it is just plain wrong. The last 10 km, he did it quite a few times. I have a very hard time believing that it could be quicker than just a normal tuck, on your seat, hands next to the stem. The guy couldn’t have been getting hardly any power into his pedals. Not enough power to offset the bad aerodynamics it was causing for sure.

The only other time I’ve seen anything even remotely as different was a long time ago at Redland’s. Roland Green was racing for Trek I think, maybe Team Dirt, I don’t quite remember, but on the first stage on the Highland Circuit, Roland took a solo flyer and when he got to the 500 meter climb, he rode the hill no handed and used his arms to push down on his knees to climb. He stayed off the front for quite a while and did it each lap up the climb. He never got out of sight, so we could all see him doing it. Afterwards, a few of us tried it. It sort of worked. It definitely worked much better than trying to pedal circles when you’ve lowered your seat position by 25 centimeters like Metej did.

Anyway, I didn’t want Louis Meintjes, from South Africa, who ended up finishing 2nd, to win because he couldn’t descend well enough to just stay with Matej on the first descent. If he could have just stayed on the Slovenian’s wheel, he had a very good chance at winning the race. But, no, he couldn’t descend with him. So, he didn’t get a shot at victory, even though he was a better climber and it was a climbers course.

Metej Mohoric was Junior World Champion last year, becoming the first rider ever to win the titles back to back. He is obviously a very talented bike rider. But, someone needs to teach him it is very important to rest while descending fast, not waste energy riding silly. He did win, but shouldn’t use that as a valid defense of his “technique”. He is going to be riding for Cannondale next season, so Peter Sagan will probably start using Matej’s descending style by mid-season next year.

And talk about weird results, how about Tony Martin riding only 1 minute 20 seconds slower than his whole Omega Pharma team did in the team time trial at Worlds? He would have beaten 30 out of the 35 teams entered in the TTT. all except Orica, Sky, BMC and RadioShack, which would have beaten Tony by 3 seconds. That means that Cancellara only rode 51 seconds slower individually than he and his whole team did on the same course. Seems like they were doing something wrong there. 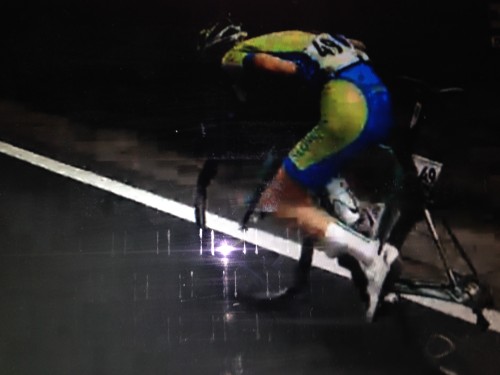 I know this is a bad picture of the computer screen, but you can definitely see how weird it is if he keeps moving his cranks in rotation. 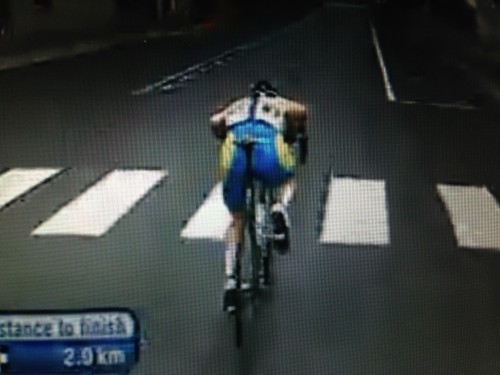 Here he is with less than 2 miles to go in the race doing it again. 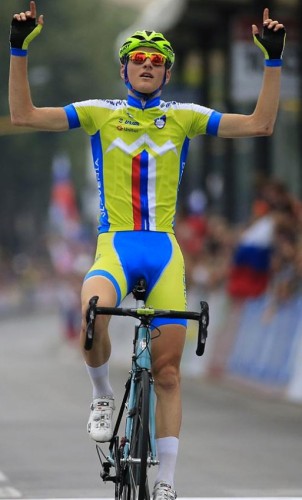 Matej looks much better doing his victory salute. He has that down pretty well. 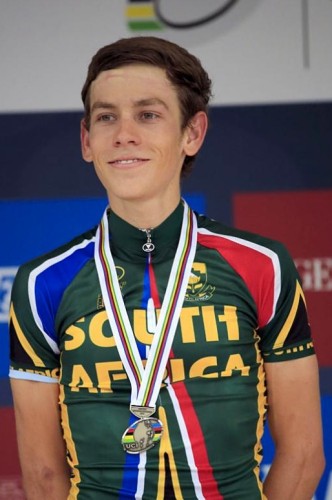 Louis Meintjes, from South Africa, who finished 2nd and looks like he could still be in junior high school.

9 thoughts on “Rarely do I See “New Riding Techniques””