Today is the Elite Men’s Worlds for Time Trialing. So far, the United States has had some pretty great results. We’ve finished on the podium twice, with Carmen Small 3rd place in the women’s race and Zeke Mostov, 3rd place in the juniors. And Lawson Craddock had a pretty unbelievable ride finishing 5th in the U23 after crashing. He tweeted something about being good with 5th, even after crashing on the “straightest road in Italy.”

I normally wouldn’t call watching time trialing exciting. But with the results from the Team Time Trial being within a second, with Omega barely getting by GreenEdge and then Carmen Small beating her US team mate, Evelyn Stevens by .04 seconds to take the bronze medal in the Elite women’s race, it has been nail biters.

Bradley Wiggins was being the goof ball that he is and is saying that if he happens to win the race today that it will be the biggest victory of his career. I wonder if he forgot that he won the Olympic Games, just a year ago in the time trial. Man, the guy is completely mental. He must feel an unbelievable amount of pressure.

Bradley goes on to compare time trialing to getting a tatoo. “Everyone has different ways of dealing with [riding for more than an hour]; that’s what defines you as a time trialist. You can get into your own little world, you need to be able to deflect the pain,” Wiggins said. “I told Alex [Dowsett, British teammate], it feels like having a tattoo, it hurts for the first 10 minutes, but after awhile you don’t feel it. You get to a different state. It’s only when you finish, you cross the line, that you realize how much pain you’re in.”

I leave that for you to judge.

Anyway, the Elite men’s race today is going to be great. There are some many guys that could finish on the podium that it is going to be hard picking. Here’s my picks in order – Cancellara. Martin. Wiggins. Phinney. Porte. Pinotti. 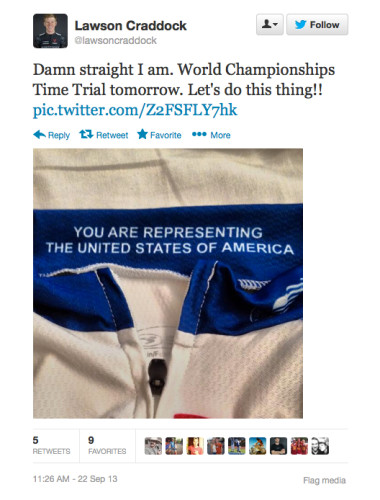 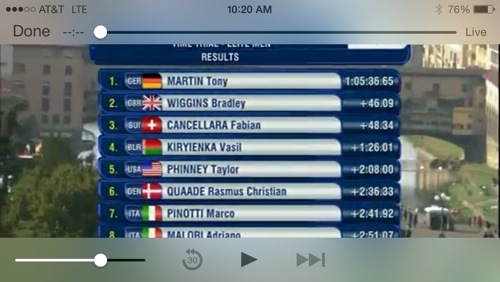