I really don’t know what to think about Peter Sagan as a cyclist. He sure is a different kind of bike rider than usual. A classics type rider who can sprint crazy good and sometimes climb with the best. But, this isn’t about his physical abilities, this is about how the guy can handle his bike. And he does that unbelievably well.

He can turn as well as anyone I’ve ever seen, at least on TV. I would like to ride a race with him to really see if he is as good in person as it looks through the media. I’d probably have to ride a bunch of races to actually make that call, but you know what I mean. He descends crazy good when he has to and obviously can corner at the end of a race much better than nearly everyone else. Below are some photos of the last stage in Alberta on Sunday. He comes from so far back, turns the corner much, much sharper than everyone else in the field and comes out of the corner with a winning margin. It is pretty amazing.

I remember him winning a stage a couple years ago, maybe last year, in the Tour of Switzerland or Romandie. It was a long descent and he railed the thing, caught the leader right before the finish and then easily won the sprint. It was beautiful.

Anyway, he is a pleasure to watch. I think he scared the shit out of Robert Förster, UnitedHealthcare Pro Cycling Team, turning so late. I bet Robert thought Sagan was going to t-bone him. Anyway, good stuff. 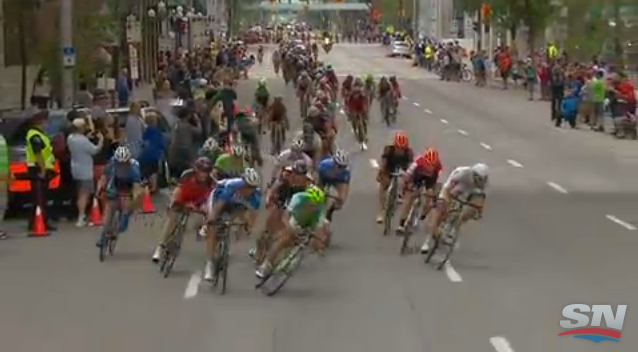 Check the angle at that Peter Sagan’s bike is at compared to the other riders. 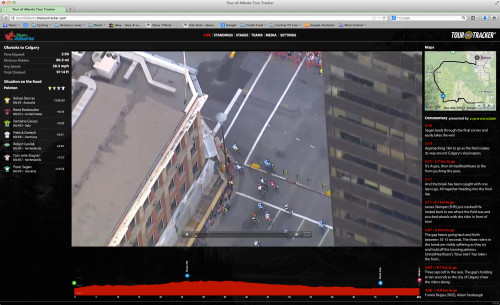 And this is the top photo a couple seconds later. It is amazing how far ahead he already is. He comes out of the corner bike lengths ahead of the other riders. Click to enlarge. 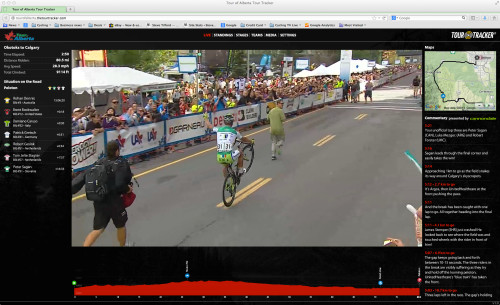 After race show off, which is fine.

Here is the sprint above in real time.