I’ve only been in Park City for one day and I can say I really like this town. I’ve raced here a bunch off-road, but not in the last decade. Man, has this town chanced a bunch since then. Mainly by growth. It is amazing how much more is here. Deer Valley is jammed, as is Park City. The MTB network on the hill is amazing.

Yesterday I rode up the Armstrong trail, to the Mid-Mountain trail and met up with the gang from San Diego. The Armstrong trail is only uphill. I’m wondering if they are going to rename that one? Anyway, we rode over to Red Pine and then back on the Mid-Mountain trail to Park City. It was about 30 miles off-road. My arms are pretty worked. I fell once. I’m not exactly sure what happened, but for some reason, my bike stopped and I flew over the bars. When I got up, my rear wheel wasn’t in. It was about 2 hours into the ride, so I’m not sure exactly what happened. I assume my quick release came undone during the fall, but that doesn’t explain getting launched. I doubt I’ll ever figure it out. My shoulder was pretty achy all night from hitting the ground.

This morning I have an appointment to see Eric Heiden’s wife, Karen, who is also an orthopedic surgeon. But, she specializes in hands. She is in practice with Eric I think, but I’m not sure about that. She is going to look at my thumb and hand. It is a good time, since they both are pretty jacked up. Maybe I’ll get Eric to look at my shoulder if he is around.

Trudi took off at the wee hours of the morning to drive the 1700 kms. up to Edmonton, Canada. That is a long ways to go. She got a good bike ride in yesterday, so that is going to have to last her for the next two weeks. She is working through the Tour of Alberta, then the two World Tour Races in Montreal and Quebec City and then she is done for the season. She has a ticket back to Duluth the day after Chequamegon, so it’s only a couple more weeks.

I’m going to try to spend the majority of the day riding my MTB bike. I’d like to put some new, fatter, tires on to ride, but I doubt I’ll get around to it. I’ve been riding some Specialized Fast Trak 2.0. I got some 2.25 Schwalbe tires to try out, but don’t have an air compressor readily available, so I’ll just have to wait I guess.

I’m heading back to Steamboat on Thursday to go hang with Kent (Eriksen) for the weekend. Maybe I’ll hang with him late at night, when he seems to get a ton of work done. Maybe I can miter up a couple tubes and help put together my road bike if he isn’t already done with it. 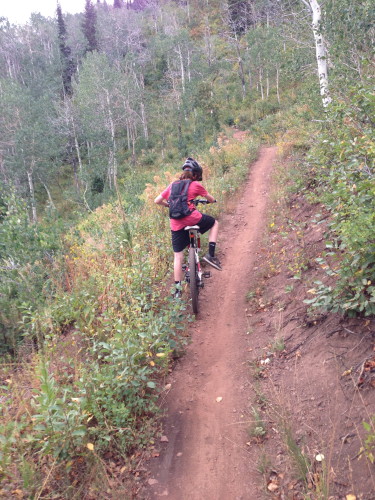 I rode up on this kid when I was climbing up the Armstrong trail. He was pretty high up. I saw his dad a little later and got his phone number. I’m going to send him some MTB shoes and pedals for his son. 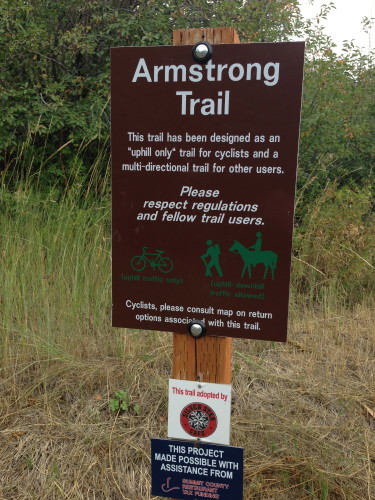 I wonder how many cities across the country have places and things named after Lance? 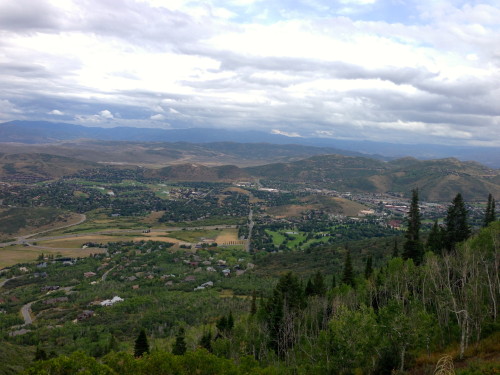 The view from the Mid Mountain trail. 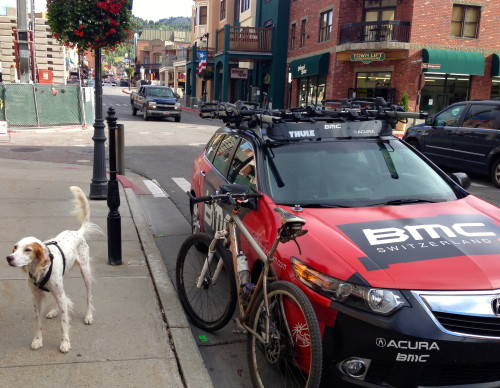 Bromont waiting for Trudi after the ride. 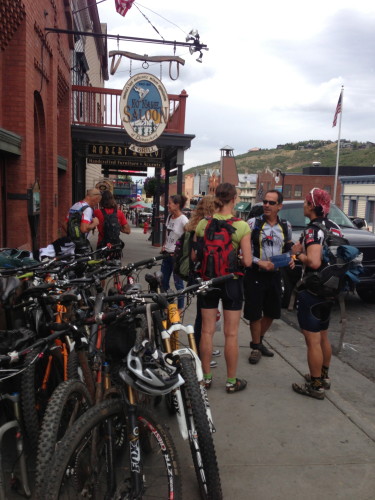 The San Diego gang getting a beer after riding all day. It is amazing how much stuff they carry in back packs. That weight would kill me. 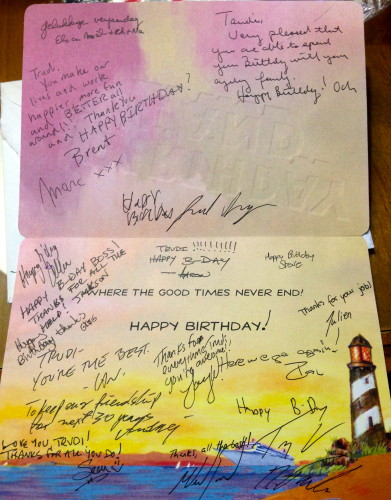 Trudi got a great birthday card from her team. Click twice to enlarge.