The US Pro Challenge’s GC might have been decided by wet roads yesterday at the finish. Tom Danielson was still climbing as well as in Utah, but couldn’t manage to stay with Janier Acevedo (Jamis-Hagens Berman) and Tejay van Garderen (BMC Racing) on the wet descent before the finish climb.

I’ve written before about how I believe that a true professional needs to be able to descend as well as they climb. I know that is a problem when you start getting to the very best climbers in the world. Everyone does have a different ability level in each aspect of the sport. But to lose a race because of not being able to follow on a descent would be something that would really bother me immensely. I’m sure it is bothering Tom now. Tom’s Garmin team director, Charly Wegelius says “Tommy just needs to press ‘Control, Alt, Delete’ on today and just focus on his best performance.” That is not bad advise.

I don’t know much about Janier’s handling skills, but a couple years ago, in the Pro Challenge, descending off of Independence Pass, Tejay was virtually in the front the whole way down and it was wet. He was racing for the GC lead that day too. He was quoted as saying he had “balls” on the wet descent. That is part of the wet descending equation for sure. But, he also has the skills.

Descending well in the rain, or descending poorly compared to others, shouldn’t reflex as badly upon a rider as back when Andy Schleck couldn’t manage to follow the field down dry road in the Tour a couple years back. Descending in the rain does take a very special skill set and the slick roads do magnify the differences in abilities, thus causing bigger time gaps. And no one really trains for it. It’s not like a rider says, “Wow, great, it looks like it is going to rain, I should go ride up and long climb and rail the descent”. So, you only get better racing and then at the races you have what you have. In this case, Tom didn’t have the skills that Tejay and Janier had.

But they have the time trial today to mix it up some more before the weekend. Should be interesting. 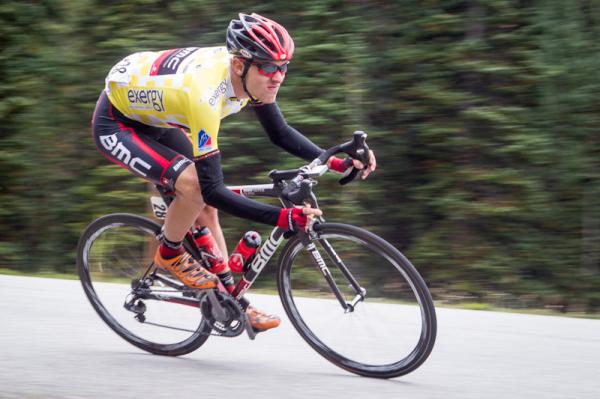 8 thoughts on “Descending in the Rain”