I think that is the saying? That is never good when it applies to crashing. That would apply to training here in Topeka the last week. First, I crashed in the rain, got pegged by Bill and broke a bunch of ribs.

Wednesday, we were coming back to Topeka, rotating pretty quickly and had an problem at a intersection. The end result was that Bill was laying on the ground once again. Then yesterday, we were out West of Dover, turning a corner with new chip and seal and next thing you know, Catherine’s front wheel is sliding out and she is doing the same. Man, it isn’t a good thing falling on new chip and seal.

It seems like the evening training rides here have been going pretty fast the last couple weeks. When Bill fell the 2nd time, we had a 22.5 mph average at the sprint at 40 miles. That is pretty quick considering how slow it is getting out of town. It is so funny that during the cyclo-x season, there is at least one race and usually two races a weekend and now during the road season, it is slim pickings. Maybe promoting a cyclo-x is just that much easier, I don’t know.

Leadville is today. My team mate, Brian Jensen is racing it as I type here. Brian is new to MTB racing, but Leadville isn’t much of a true MTB race. But, there is enough descending to make it tough from Brian to ride with the leaders. I’m predicting a 10-25 place finish for him, but he could prove me wrong, he has it in his ability. Hopefully on the good side. I can’t readily find a live tracking site, so if anyone knows of one, please leave a comment to a link. I’m thinking Todd will win again this year. I think I read somewhere that he was training for it again, so if he did his high altitude stuff he did a couple years ago I think he’ll have a leg up on Sauser and Lakata.

Okay, I’m thinking about racing tomorrow in Jefferson City Missouri. It is the Missouri State Criterium Championships and it is around the State Capitol Building, just like the East Village Criterium last weekend. That would be 3 criteriums that I’ve done this year circling Capitols, including the National Criterium Championships around the Capitol Building in Madison. Maybe 3 will be my lucky number in this regard.

Brian at the start this morning in Leadville. Looks chilly. 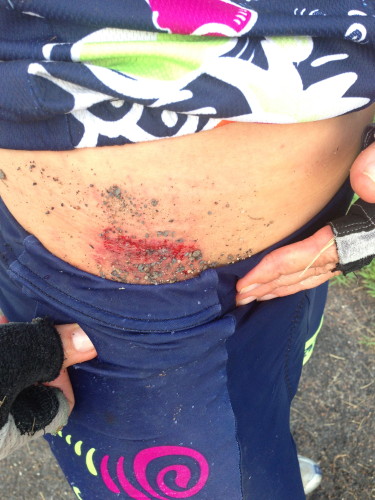 Just some of the damage on Catherine. It’s her birthday today, so it was lucky she fell yesterday and got it out of the way. 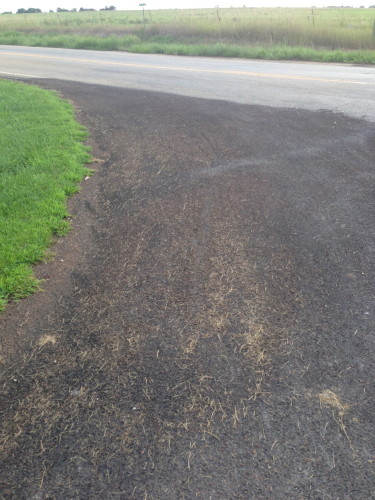 This is the corner she fell on. Pretty sketchy.