I was riding out through an old area of Topeka, called Potwin, where it is still brick streets. There is grass and weeds growing up between the bricks on the edges of the roads. The middle is pretty clear because of the traffic, but there sides are turning green. I’m not sure what the city used to do to stop vegetation from growing on the brick streets, but they aren’t doing it now. They must have sprayed Roundup or some other vegetation killer and now they don’t. And it has to be a financial constraint. It was raining and I didn’t want to get anywhere near the edge of the road. Wet grass on wet bricks is about the worst case scenario for a bicycle tire.

It got me thinking some about how much different you can feel about a subject, observation, or emotion when you look at it with a different perspective. Or have a lower or higher expectation. It all depends on how you look at it.

I wish more Americans would look at “our” situation and realize that they have it very well. I’ve written it here before, but I’ll do it again. We have already won the lottery being born in the United States. It doesn’t matter what your demography is or where you happened to end up, you still won.

I saw an article on the front page of the USA Today a couple days ago taking about how horrible our roads have become. It used the state of Connecticut as an example of bad roads and bridges. They could have used Kansas or most of any other state I’ve been to the last couple years. Well, maybe not Wisconsin. Their roads seem pretty good. Anyway, the point is that our infrastructure is having some major issues and need major attention. At least comparing it to what we are used to historically.

I’ve been sort of depressed about this. Obviously I use the roads a lot everyday. I drive a ton, plus ride my bike a few hours a day. I’ve personally witnessed our roads getting worse. No one likes to accept worse roads or a decline in any situation. But, what I have to realize is that our roads our much, much better than most of the rest of the world’s roads. And that is the case with nearly every service you can come up with.

We have it very, very, very good. And most of us, me included, take a lot of it for granted. We are so used to having things a certain way that don’t appreciate it nearly as much as we should.

Think about getting hurt here in the United State. Nearly every citizen in American is just three numbers, 911, from having someone come and help them. No matter what your financial situation, your ethnicity, or whatever separates us, a police officer, fireman, or paramedic will show up and help you if you are in need. That is such a huge service. Knowing that we have this safety net throughout the country is something that many of us might not even put on a list of things the government does for us, but in reality, it gives all of us a peace of mind. Even when we aren’t with our friends, children or family, we know that if they have an accident, medical issues and such, society will take care of them until we can go help them.

This isn’t the case for the majority of the population of this planet. Most of the people on this planet couldn’t even imagine having this service. They are responsible for themselves when they are in situations when they can’t take care of themselves. We have it so good.

And the list goes on and on. We have water at our finger tips. It is everywhere, we just turn a knob and it pours out. Nearly any person in the US can go and get a 44 oz cup of ice cubes and cover those cubes with Coke, water, or whatever liquid they want. I can’t really come up with a really great guess, but for sure there are billions of people on this planet that have never had an ice cube. We have free ice in every hotel, service station, work place, just about everywhere. Ice isn’t free, though. It takes a ton of energy to make a liquid into a solid. Some would consider it wasteful energy. Not us. We like our cold beverages and expect them.

I think this is a fact. But, it doesn’t have to be depressing. We have been the world leader in most aspects of life on this planet for the last century. Most people are just trying to catch up with us. We need to have the perspective that as our standard of living is getting lower, lower compared to how it used to be, there are places on the planet where the standard of living is getting better, much better. They are just trying to get water, clean water, let alone ice cubes. Would you give up your ice cube for someone else to have access to water? I would. 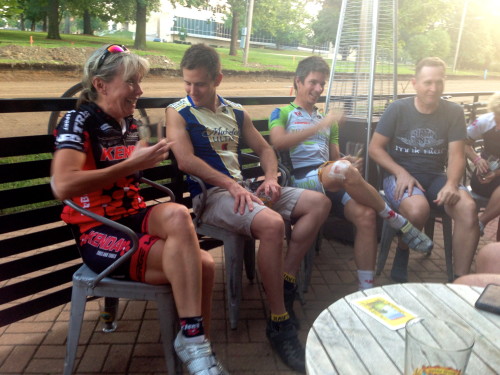 We have it real good. For $3 after the ride yesterday, a pint of cold beer is available at The Flying Monkey. I thought this photo was subject appropriate because of the beer, road construction behind, and plus, Catherine using her first pint glass as a chair leveler. I’m pretty sure she has no idea how that happened. 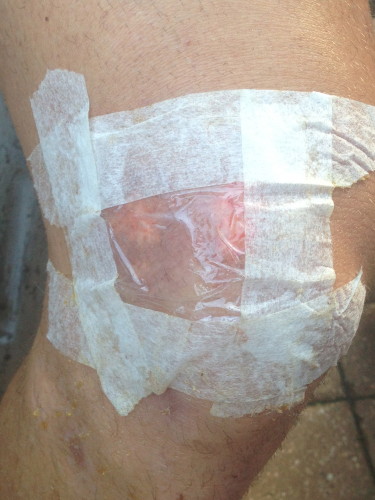 Bill has already lowered his standards by making his own Tegaderm with a plastic wrap and paper tape.

6 thoughts on “It’s All About Perspective and Expectations”