The last couple days here in Kansas have been abnormally cool. On Saturday, here in Topeka, it was the lowest high temperature ever recorded. I was riding out West of town, trying to avoid the rain and the temperature was in the high 50’s mid afternoon. That was about 50 degree cooler than the same time last year. It rained on us just a bit. It is amazing how fast it goes from feeling alright to being cold when you throw just a little water into the mix.

I’ve been cold a bunch riding bikes in my life. I wrote a post a few years ago about the coldest I’ve ever been. It wasn’t at a bike race, it was at a photo shoot during a bike race.

I’ve raced a ton of bike races. Thousands. And plenty of those have been in the rain, snow and cold. I usually do well in the cold. I thought historically that I do well because many other people use it as an excuse to not do well. That probably isn’t the whole reason. Some people probably just don’t function physiologically as well when they are cold as others.

Anyway, I don’t normally get cold racing off-road. Cyclo-X and MTB racing is so high intensity, that your body is running super hot and there is much less wind chill because you’re moving much slower.

I hardly ever race in leg warmers or tights. Hardly ever. I usually just put oil on my legs and call it a day. I will wear knee warmers/leg warmers if it is just plain, down right, cold, with no moisture, but as soon as it is going to be wet, I won’t wear them. I hate having wet cloth over my knees when I’m racing.

It was during a 104 mile road race, two 52 mile laps. It was raining at the start of the rain. Cold rain. I was riding for the Levi’s team with Roy Knickman, Tim Hinz and Thurlow Rogers. We knew it was going to be a hard day. I didn’t realize it until I pulled out the newspaper article, but I guess we voted at the line whether to race one or two laps and it looks like it was almost unanimous that we voted for one. But, it must of been one of those votes were if one guy votes no, then we race the whole way because we did 2 laps. (I bet that guy didn’t finish.)

The was snow on the ground, the temperatures in the low 40’s and it was raining and sleeting. I was dressed appropriately. I’m pretty sure I’ve never wore so many layers on top. I had a wool undershirt, a wool long sleeve jersey and a Lead Edge Gortex jacket that Andy Hampsten had gotten us. Gore-tex was new on the market and it was perfect for the day.

I used to always start fast, so I was a perfect candidate to cover the early move. I always did. That move went almost immediately, mainly because of the weather. I got into a break, I don’t remember exactly, but maybe around 6 guys. We were rotating okay, but not completely motivated because we knew most likely that it wasn’t going to work and that using so much energy early, the end of the race was going to be real ugly for us.

The break did the complete first lap together and at the end of the lap we rode up Mule Pass, through a tunnel and then descending back into Bisbee. On the climb, it was raining a sleeting. I look back and saw a group coming up to us. I recognized Roy at the front, so I sat up. The new guys were pretty fresh compared to us. I managed to hang onto them over the top.

Getting caught, it was my job to get Roy as far up the road as possible. Right after leaving Bisbee, we started going pretty hard. I figured I’d pull for maybe 20 miles and then be done. I’d been off the front all day. Pretty soon it was just Roy and I pulling with the rest of the group sitting on.

I told Roy to sit on more and I was doing the majority of the work. I figured I was going to be done way before the finish. Eventually Roy got impatient and attacked with 15 miles to go. Randy Wicker, a super strong guy from Colorado went after Roy and I got on him. Randy got me about half way up to Roy, swung over and said that he was pretty much done and it was “all ours”. So, I pulled Randy up to Roy and told him the situation. I kept going hard at the front, just trying to get to the bottom of the final climb.

When we got to the bottom of the climb, Randy just sat up. I was surprised. I made it maybe 1/2 way up the climb with Roy, but couldn’t keep his pace. I remember Eddie B. standing on the side of the road when I was still with Roy and knew that wasn’t going to be good for me. Roy always like to show-off in front of Eddie, so I knew my time was short. Roy dropped me a couple miles from the top and I pretty much seized up. He put a couple minutes into me the last bit. I held on to finish 2nd, Randy 3rd.

Upon crossing the line, I was shattered. Beyond shattered. Trudi rushed us into a warm cafe and covered us with wool blankets. I couldn’t keep from shaking. For hours. What is weird is that I had ever piece of clothing I could wear on and Roy was wearing a short sleeve jersey and long finger gloves. And I very much doubt that if you asked him, he would say it was that bad of a day. It was my coldest. 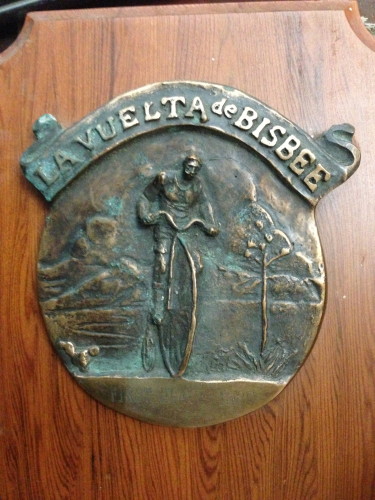 This whole story came to mind when I saw this trophy from the race. 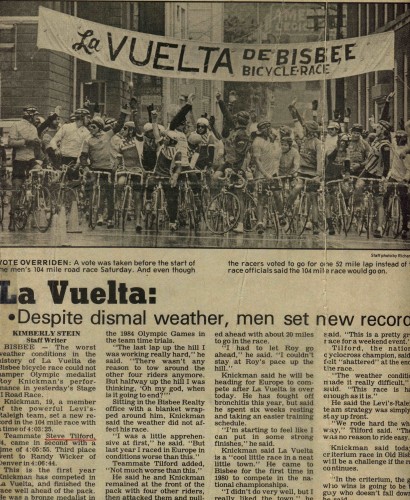 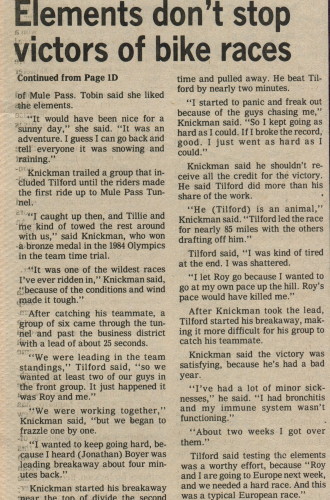 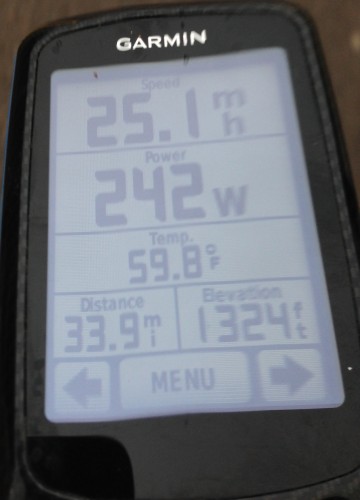