This article at Cyclingnews.com is about the release of Froome’s power data by the Sky Team. They showed his power data to French physiologist Frederic Grappe and Frederic gave Chris Froome a clean bill of health. No doping. Consistent with hard work.

A problem that they have with this is that Frederic also defended Lance Armstrong over a decade ago, when it has been proven, that Lance was in the middle of “the biggest doping fraud in the history of sport”. Below is an article about his comments about Lance.

I have no idea if any of this means anything about Chris Froome racing his bike clean. I do know that it was a very bad choice by Team Sky manager Dave Brailsford to pick a guy like Grappe, who obviously has made some very wrong conclusions and public statements in the past. 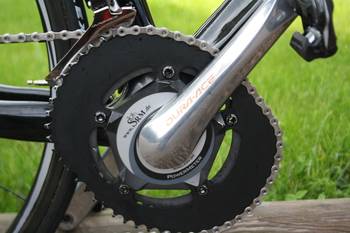 This instrument tells us all.

Frédéric Grappe on anti-doping and Armstrong

La Francaise des Jeux trainer, Frédéric Grappe, has come out in support of Lance Armstrong, after doping accusations have been leveled at him and the U.S. Postal team. In an in depth interview with L’Equipe, Grappe said that Armstrong’s results have come through hard work and not hard drugs, despite the climate of suspicion that still surrounds cycling (especially in France) at the moment.

Grappe started by saying that to fight doping in general, the role of a good trainer is paramount. They must be able to set a program that will not over-tax their riders but keep them in top shape for a certain competition period. Some top riders already do this, although they are subsequently criticised by fans for not riding the whole season at their best. Not everyone can be an Eddy Merckx.

“A great many riders spend their time during the week at home unsupervised,” said Grappe. “The trade is so difficult that sometimes they are mentally quite low, in a state of weakness. In these moments of great loneliness one could suppose that a very influential person could propose things to a rider. I know this for a fact…I do not blame the riders, but the system because it would only take a few things to change it.”

Grappe believes that doctors are given too much status by the FFC and the UCI, compared with trainers such as himself who know the riders. “It is necessary to work from the base and to develop riders with quality supervision from teams…to offer the riders a true ‘alternative’ to doping.”

He then commented on the accusations that have been made against Lance Armstrong regarding ‘impossible’ power outputs. “Certain people say silly things. When we are told that a rider is not able to put out 420 – 430 Watts in a time trial, that is false. Not so long ago, one of the riders with whom I was involved climbed Mont Faron at a power of 400 Watts for 20 minutes, and he is far from being Armstrong. Consequently, I am not astonished that Armstrong or others can produce 460 or 470 Watts on a mountain. It is not impossible.”

In addition, a cadence of 80-90 rpm to produce this power on climbs is also not impossible, according to Grappe. “It is the result of many days of hard work. With what has happened in the past 10 years, many riders are using bigger gear ratios. Some have lost the suppleness, i.e. they are not able to utilise higher pedalling frequencies…a high pedalling frequency makes it possible to relieve the muscles,” said Grappe who expressed his annoyance of people’s poor analysis of the data.

Grappe also commented about the inaccuracy of hematocrit testing, which he said can change by up to 5 percent depending on the status of the rider (upright, lying down, dehydrated, previously active etc.). “We see riders who can reach 50% naturally, and that can move to 51%. That does not mean doping.”