The Elite Nationals Criterium Championships turned out pretty strange yesterday. And, I suppose, I created that myself.

The race started out normal. It was pretty hot, in the upper 80’s, lower 90’s and super muggy. The course was a square, left hand corners, around the capitol building of Wisconsin, in Madison. It wasn’t flat. It is flat on two sides and then down on the 2nd side and up on the 4th. So, the sprint out of the 3rd corner is uphill to the final corner and then hardly 150 meters to the finish.

The decisive element yesterday was the wind. I’m not sure how hard it was blowing, but it was blowing enough to make escaping from the field really nearly impossible. It was so hard to ride off the front and very easy sitting in the field. The course itself played a minor role. The pavement sucked. There were random potholes everywhere. Tons of flats. And the corners had seams and painted lines running around the curves. I’m not sure I’ve raced a criterium before when the cracks are parallel with your tires as you turn a corner. It made for some pretty sketchy riding.

Anyway, like I said above, the race was pretty easy if you rode it that way. There were a few moves that went up the road for a few laps. I only was in one break and realized after that there was a very good chance that it would end up being a field sprint.

I felt pretty great. Great compared to this season, not great compared to riding great. I was worried about over heating, but didn’t seem to feel too bad from that. The finish was going to be good for me. Uphill to a corner that was close to the finish line.

Everything was going pretty good until about 9 laps to go. I was riding maybe 20 guys from the front and there was a crash on the first corner. I thought I was going to get by, the one guy hit the barriers and his bike flipped back towards the field. I ended up riding over it and into the barrier. I didn’t fall, but when it hit the barrier, or his bike, I back pedaled and my chain fell off. I was still going down the course and it wouldn’t shift back on. I put my hand down and grabbed the chain, but by the time I got it back on, the field was long gone. Someone yelled for me to take a free lap. I was more than 2/3rds the way down the stretch and rode over to the sidewalk to do a U-turn to head to the pit. But I realized I couldn’t ride back up against the crowd and kept going around.

I wasn’t thinking too clearly and was trying to figure out exactly how many laps to go and when the free lap ended. Really, I needed to cut the course, but you can’t go through a building. So I started riding hard on the sidewalk, but right then, the lead motorcycle came by. I made a very bad decision and just jumped back into the race.

I was way back in the field and it took me a couple laps to get back to a good position. By then there were only 5 or 6 laps left. The Cash Call team was at the front trying to pull a United Health Care and do a bullshit leadout. They were controlling the front, but mainly through drastic movements at the corners. It was pretty chaotic behind them.

There were a million places to pass on this course. The corners were sketchy because of the pavement and lines, but that made for good places to pass also. The last lap I was maybe 10 guys back. I was trying to key off Eric Marcotte and the Elbowz guys. Coming down the 2nd stretch I passed a few riders in the 2nd corner and was maybe 5 or 6 guys back. I wanted to led through the 3rd corner and take it up the hill to the final corner. I jumped pretty good about 100 meters from the corner, but it didn’t turn out too good. This is where Eric was peeling off from leading out Travis McCabe. I got jacked up when he slowed and ended up coming out of the corner in 4th position, a few bike lengths behind the leading 3 guys.

Here I made a huge error. I left it in way too big a gear and didn’t make up any ground on hill. I rode the whole hill in the wind, a few bike lengths back. Going into the last corner, Rahsaan Bahati and his Sharecare team mate, Yosvany Falcon went by me. The finish was only a short ways down and maybe one or two more guys passed me. I had lost motivation and knew that my place wasn’t going to count anyways.

Travis McCabe, Elbowz won the race. He is sprinting pretty great this year. I’m not sure if it was close, but he didn’t throw up his arms. I rode a cool down lap and went over to Trudi, Bill and a gang of friends I haven’t seen forever. They seemed pretty excited, but I told them there was a problem. That I took a free lap, not in the pit. I told them I needed to go over to the officials and report myself. Then I rode over to the back of the stage where the officials were.

I am pretty sure that the head official was expecting me. He seemed pissed and told me that I knew better and had to take the lap in the pit. I told him I did know better and that I had no excuses. I asked him that if I would have ridden backwards on the sidewalk, could I have gotten thrown back in still and he said he was throwing riders in until 8 to go, 5 miles.

I obviously wasn’t thinking right. I thought about it while driving North and couldn’t come up with a rational thought of why I just didn’t ride to the pit. I didn’t want to miss out on the sprint, but WTF? I know better. I have to plead temporary insanity. I definitely got caught up in the racing the last laps, but knew that I was going to be put a lap down or disqualified.

Anyway, that was the day. I am mildly surprised that I could make such a horrible decision at a bike race. I’ve done a million of them and I normally think pretty rationally while racing. I’m not sure the difference here.

I think the race was winnable in the right situation. As it turned out, I never had a chance. I’d love a do over on that one. But, that’s not how it works. I guess I have a few days up in the woods to try to figure out what I’m up to next. I’m a little battered, once again and don’t really have a plan for the next few weeks. 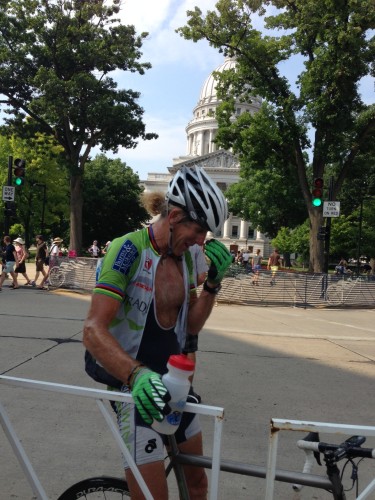 Right after the race thinking about how stupid I was just a few minutes earlier. 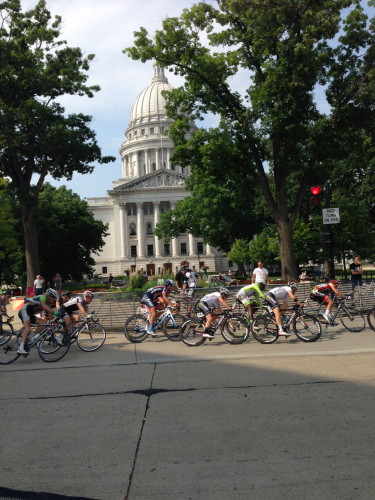 Here’s a photo showing some of the cracks on the corners along with the painted lines. 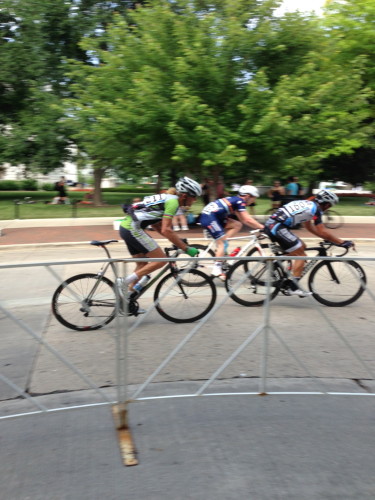 Off my seat behind the eventually winner, Travis McCabe. 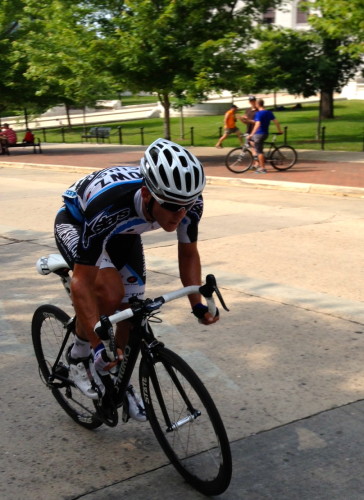 Joseph rode a few laps off the front ,on his own, towards the end of the race. 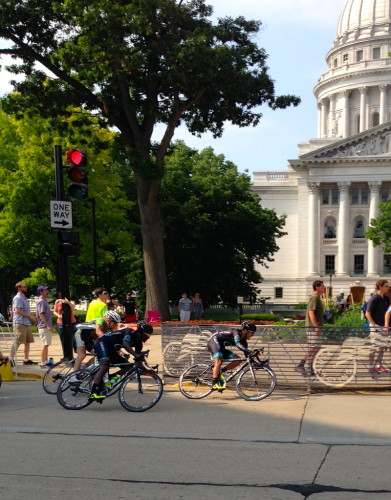 The final corner getting passed. 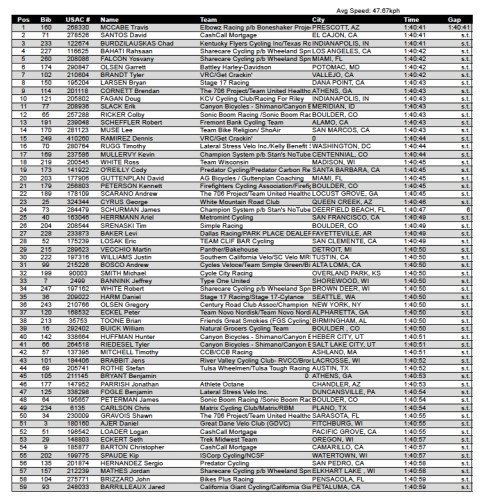 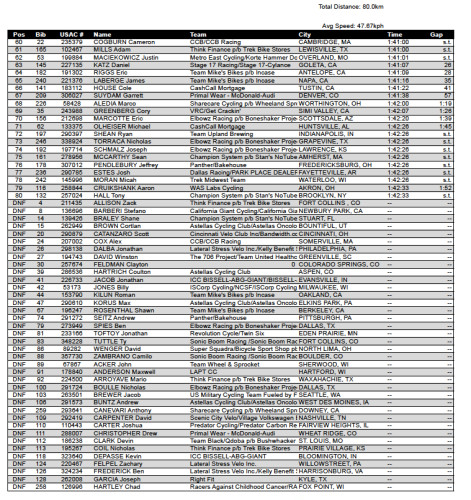 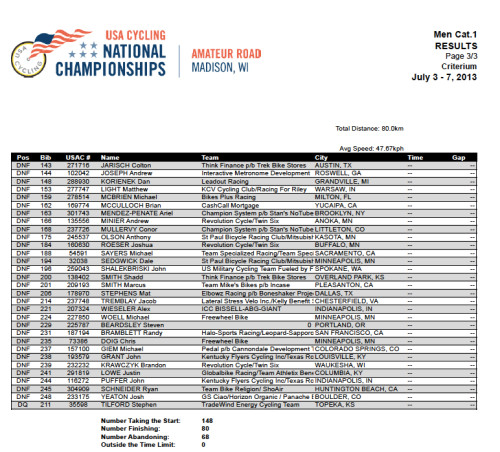 12 thoughts on “Criterium Nationals – No Excuses”