There wasn’t a way I was going to be happy with a finish yesterday at the criterium in the Tour of Lawrence. The reason was that I was riding like shit. I used to say that I would rather be riding good than finish good. That probably wouldn’t apply to the race yesterday exactly. I finished okay, but can’t say I have any satisfaction in the result.

I woke up in the morning feeling alright. Not too torqued from the road race on Saturday. I had enough time to watch the finish of the Tour, then get on my bike and ride the 30 miles over to Lawrence to get there an hour before the start. It was pretty windy, blowing from the North, so it wasn’t that easy. I had a friend, Scott Anderson, show up last minute, to escort me over to Lawrence.

I can’t say I felt stellar on the ride over. I finally just sat on Scott for about 10 miles, worrying that I was using up too much energy riding in the wind before the race.

I stopped and got a coffee right when I got there, hoping a little caffeine would perk me up. Brian came by and seemed in pretty okay spirits. There wasn’t that much time before the race.

It was pretty much the same field as the day before, somewhere around 75 riders I’d guess. An addition was Stefan Roth who decided to make the drive up from Texas to join us for Sunday. I think he rode the Texas TT Championships the day before, but that is just a rumor.

Anyway, the wind was the factor that really dictated the race. It was a 20 + mph wind from the North, so it was straight into your face for about 1/2 a lap and then tailwind back to the finish. That really put a damper on the speed and attacks. Only one break of any danger got away all day, a 4 riders break of Stefan, Adam Mills, Think, Matt Stevens, Elbowz, and an another Dallas guy I don’t know. They got a pretty good gap, but Brad Huff put in some well times pulls at the front, then Brian tried to jump up to the break alone, but most everyone in the field knows Brian’s strength, so he is so marked that it just pretty much just killed the break.

The rest of the race was just cake. And even though I’m saying it was easy, I didn’t feel good. I was probably worse than Tulsa a couple weeks ago. Well, that might be an exaggeration, but I wasn’t good.

Flash forward to the end. The Think Team put a lot of guys on the front and were trying to stretch the field out the last couple laps. They weren’t going fast enough to keep guys like me from getting into pretty good position without gassing themselves. I got behind Brad Huff with a little over a lap to go. Brad has won this race the previous 3 years I think, so he was pretty much a ringer. No one really seemed to challenge me for his wheel, which was nice.

With about 1/2 a lap to go, into the headwind, Brad started getting a little vocal. He was behind Joseph Schmalz, who was on his team mate, Matt Stevens. Matt didn’t seem to want to jump, so Joseph just took off with 4 corners to go, maybe 500 meters or so.

This is where it went badly for me. I had planned to try to get into the final corner in the lead. That would be my only chance to win. Brad is much faster than me. Brad started directing Joseph about how hard to go. First it was “hit it”, then “easy” then “hit it” again. I was thinking that it was only 350 meters from the finish, with 2 corners, so we should be going flat out.

The finish is a left, then 50 meters to a right, then less than 200 meters, downhill, tailwind to the finish. I took the left and thought I should jump to dive the last corner inside. But, I wasn’t sure if Joseph was going to peel off to the right or left. I hesitated. But, neither was a good guess, because he didn’t peel off. He just kept going through the final corner and sprinted.

I was on Brad into the last corner, but my front wheel did a couple small slips and I ended up floating super wide. Brad put a bike length into me instantly and I never really got back into his draft. He went by Joseph pretty easily, but I didn’t get by him. Not really close, actually.

So, I ended up third. I kind of sat up a few meters from the finish, not seeing anyone behind me. It turned out that my team mate, Bill Stolte had been on me the last whole lap. I wished he would have told me his was there because I would have ridden the last couple corners completely different. Bill was passed right at the line by Lee Bumgarner, so he finished 5th, which was good.

Anyway, 3rd was a great result considering. But, I would have preferred trying to make a race winning move instead of just staying in line and get ridden off Brad wheel. I’ve done that the last couple years and the result is never going to change. Sprinting in a bike race is a combination of position and speed. Sometimes the result comes from only position, because I do not possess much speed at this moment.

The race was the Kansas State Criterium Championships, so Joseph won, like he did the day before. I was 2nd and Bill was 3rd. The overall was Brad Huff winning over Joseph, then I was 3rd, which was unexpected.

Our TradeWind Energy sponsor, Matt Gilhausen, took us out to 715, a pretty great restaurant on Mass. Street, with most of the Think Team. The best part of the meal, other than the liters of wine, was the dessert, which were hot donut holes with cool custard-like stuff to dip them in. I could have eaten 10 of them.

I have to take Brian and his wife Michelle to the airport later this morning. They are doing their annual visit to Denmark, Brian’s home. There are there for 11 days, I believe. He usually borrows a bike and does one race on his island. I hope he gets one this year too.

Trudi is driving up to Chicago this morning, then Madison for the BMC U-23 guys, that race on Wednesday morning at the crack of dawn. I’m heading up there with Bill on Wednesday, to race the Elite Nationals on Friday. Something better change for the better or that is going to just be a ride around for me. But, I’m so hit or miss nowadays, I shouldn’t pass up the opportunity. I need the miles for sure. 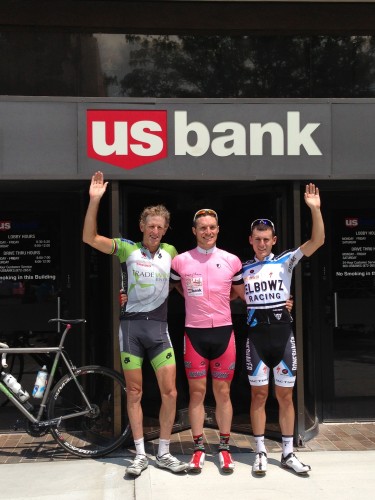 The criterium podium in front of the usbank, which sponsored the event. 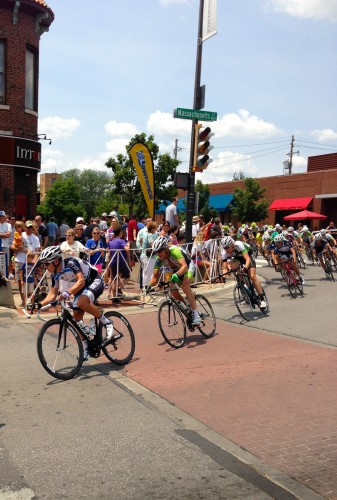 Following Joseph through the final corner one lap. 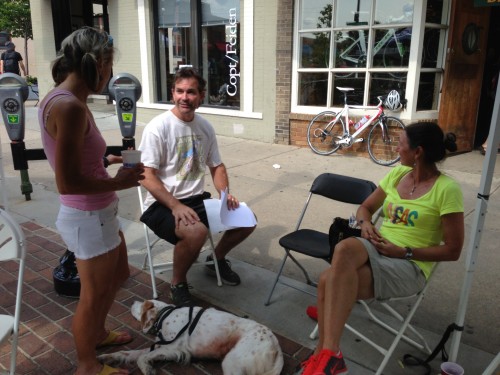 Bob Sanner, the Executive Director for the Lawrence Sports Corporation, Catherine, Bromont and Trudi hanging at the Sunflower tent. 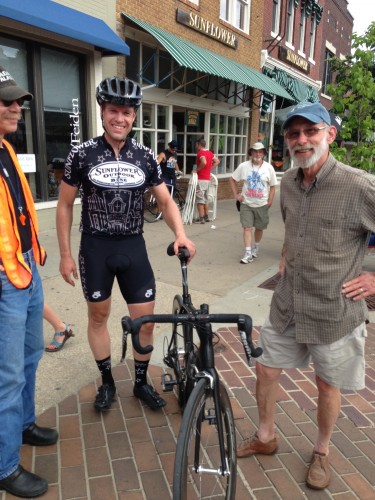 Dan Hughes, owner of Sunflower BIke Shop trying he luck on skinny tires. He won the Dirty Kanza a few weeks ago and now is racing crits. Pretty cool. 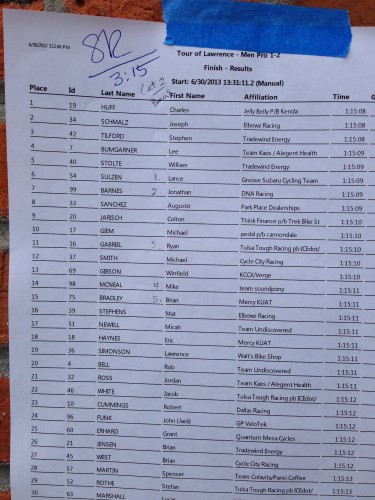 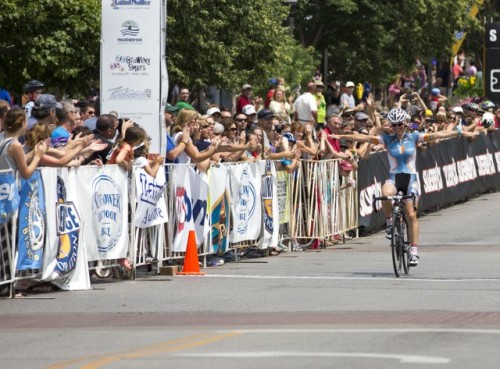 My friend, Kelly Fisher-Goodwin, won the women’s race for the 2nd day in a row. She recently moved back to the area after a stint on the East coast. 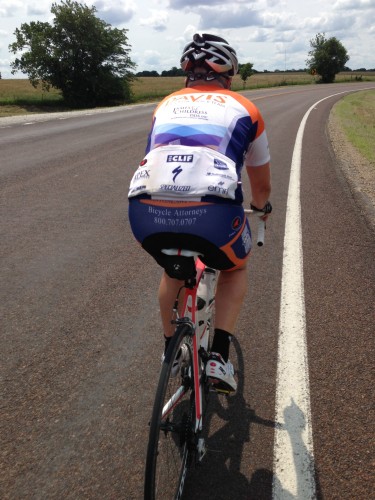 Scott Anderson’s behind. What I saw most of the ride over to Lawrence. 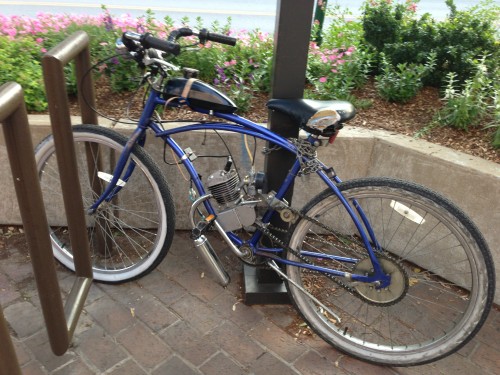 I saw this locked up on Mass. St. walking around after dinner. I’m not sure if it was homemade or a kit.

15 thoughts on “3rd is Great, but not Satisfying”