Okay, I have to make this somewhat short. I don’t have much time and a ton of stuff to do before racing this afternoon at 1pm. I’m hoping to ride the 30 miles over to Lawrence before the race, but I don’t know if I have enough time.

Yesterday, we raced 14 laps of a real hard course on the KU campus. It was essentially climbing up to the campus twice each lap with no flat in between. I think there was close to 500 feet of climbing every 3.5 miles or so. That is a lot of climbing.

Anyway, the race started off pretty fast. I’d ridden 20 miles in the morning and knew I wasn’t good, but no sure I was bad. I tried to cover as much stuff as I could the first few laps, for Brian. It turns out the first laps destroyed the 75 rider field. After 4 or 5 laps there were less than 20 guys left. It was mainly the course. It is very technical, lots of corner, sort of a long criterium, but also there was a ton of wind. The wind was mainly on the descents and it made chasing back on after you got split off, from a climb or a corner, very hard.

Eventually Brian rode off the front with 3 other guys. No Joseph or Brad Huff. I was good with that. Joseph shortly just jumped on a hill and bridged up very easily. Brad on the other hand had to work his butt off to get up there. His normal plan for this is ride the descents and corners at super high pace and then soft pedal the climbs. He had to do this lap after lap, but eventually it worked out good for him. I dropped my chain and then he jumped and bridged. I was pissed at myself for letting that happen.

So, I ended up riding around in a group of 8, 30 seconds behind a group of 9, for most of the next hour. This guy from Colorado Springs, I think his name is Clayton Feldman, pretty much pulled our group around for the majority o f the 8 laps. He was going pretty great. I told him that he didn’t belong with us and that he should have been riding up in the front. He said he was trying to do just that. One time we got close enough so I could have maybe bridged up, but I waited just a second too long and Brian attacked the group and they rode away. I was a little pissed at myself and somewhat at Brian, but he didn’t have a reason to look bad. I’d told him before the race to completely dis-regard me, so he was doing just that.

Anyway, eventually, with 3 or so laps to go, Joseph rode away on a descent. Like I said, the descents were super hard because they were headwind. He got a good gap on Brian, Brad Huff and the junior, Nick Torraca, Elbowz. That was all she wrote. Brian jumped away from the other two on the last climb and finished 2nd. Brad 3rd and Nick 4th.

We ended up catching a couple guys that had been dropped from the break, Colton Jarish, who had a mechanical, and Matt Stephens, who I’m not sure what happened to him. I felt pretty good the last couple laps and thought that I could ride away from these guys, but no. I got away, but the group caught me and then Colton jumped away from us before the last climb. I followed Clayton up the climb and thought I had won the sprint 200 meter hill sprint, but Matt Stephens came by me right before the line. It really didn’t matter, 9th or 10th.

I felt better than I had thought. Nothing great, but better. That is always a good sign. I had stomach issues the whole race and that was my major complaint. But, it really didn’t slow me down all that much as it turned out.

The race was designated the Kansas State Road Championships, so Joseph won. Brian who finished 2nd, was 2nd and then I was 3rd, finishing 10th. Lot of slots between 2nd and 10th there, huh?

Today is the Kansas State Criterium Championships. The race is in downtown Lawrence on Mass. St. It is a great venue. I hope to have more power, but I didn’t get all that much sleep. We’ll see. Last year I finished 3rd in the race, Brad Huff won. The way this weekend usually goes is Joseph wins the circuit race and Brad wins the criteriums. So far this year, it is keeping to plan. 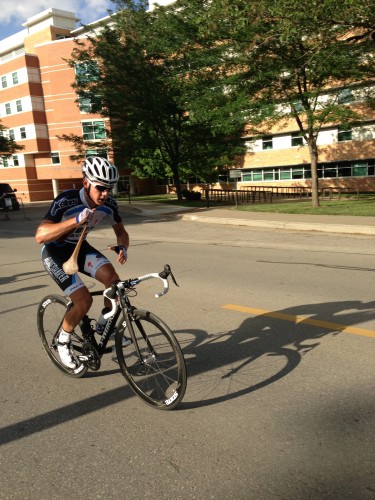 Jospeh riding away alone, getting a hose full of ice. 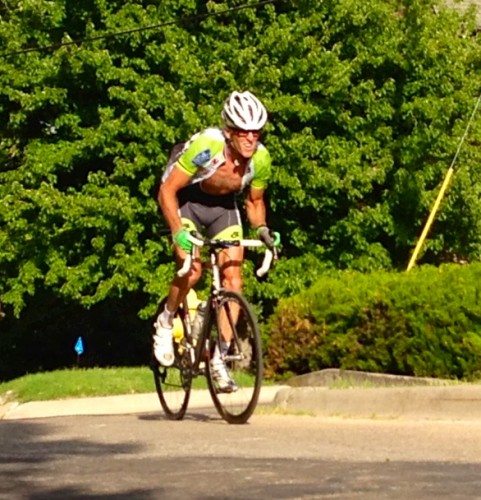 Trying to bridge up to Colton and Matt on my own. 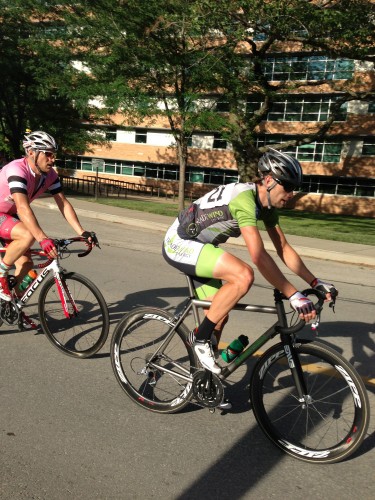 Brian and Brad Huff riding together. 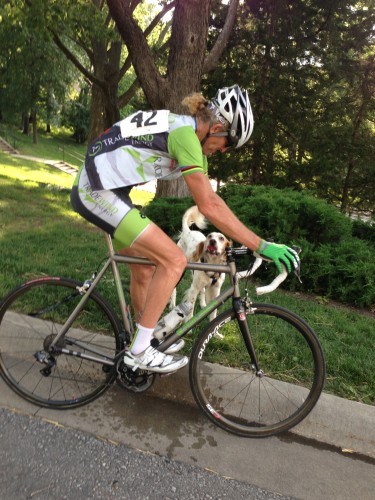 Bromont licking the sweat off me after the race. 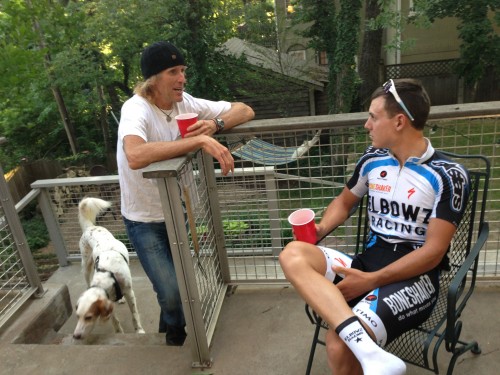 I went to a party afterwards at Matt Gilhausen’s house, which is right on the course. Here I’m talking to Joseph. 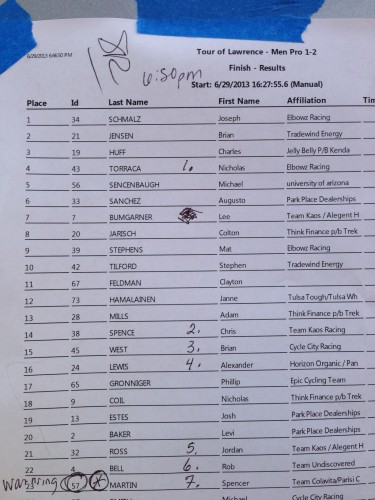