2013 hasn’t been my year. At least so far. It started out pretty well, for a couple weeks, and then it just went haywire. Yesterday I was using a chainsaw and it went bad. It could have went a lot worse, so that is the up side. But, it went bad enough that I spent the afternoon in the emergency room

It all started out nice and normal. I drove over to physical therapy for my shoulder, only to find out that I wasn’t scheduled. So, I got some coffee and decided to go for a long ride. Somewhere getting ready to ride, I thought that I would just do the 6 o’clock ride at my house and go over to this property I own and cut some trees along a fence line that the city has red flagged. So, I hooked up a trailer, filled it with the necessary tools, including a chainsaw, and drove over there.

Trudi thought that we could just use pruning loppers, but I knew better. Most of these trees, were a couple inches around and my shoulder would be valueless in that scenario. Anyway, I started cutting the saplings. Just a couple of minutes into the job, the day took a bad turn. I was cutting one and didn’t want it to fall towards me, pinching the saw chain, so I was using my right hand on the saw and holding the tree with my left. It was only 8 feet tall or so. Anyway, I cut through the tree and it didn’t fall because it was held up by a vine. I was holding the tree with my left arm and put the saw on the ground, but right then, the vine broke and all the weight of the tree was in my left hand and it went down into the saw, with the chain still moving, the brake wasn’t on.

My left knuckle went into the chain and that was it. In that match up, skin tissue vs. chainsaw, tissue always lose. I had gloves on, but gloves lose too. I pulled my hand back pretty quickly, but the damage, some damage, was done. I could see my tendons and knuckle bone before the blood started pouring out. It wasn’t good.

I calmly told Trudi that I was hurt and she sort of panic-ed, but not horribly. I wrapped my hand up in a Gatorade towel I got at Cross Nationals in Madison and drove home. I looked at the wound again and realized it was out of my league in trying to do a home repair. So, I headed down to the hospital.

The doctor came in and irrigated the wound pretty good and did a couple of strength tests. She said that I just needed some sutures, which was a relief. Then she said I was going to have to take a bunch of antibiotics, since it was a “farm injury”. I wasn’t big on that at all, since I don’t do well with antibiotics, athletically. I figured I could just get the prescription and then decide about eating them later.

Then the day got worse. When she was looking closely at the wound, she realized that the tendon was severed. She said it so nonchalant that it didn’t seem like a big deal. But, I was soon to learn that wasn’t the case.

I called my friend Stacie, in Louisville, who is over-seeing my shoulder healing deal now, and talked to her some. Stacie then talked to the doctor at the ER room. It seems there is a shortage of hand surgeons in Topeka and that I need to go to Kansas City to have surgery. I guess they need to do the surgery within 7 days, or the chances of the finger working correctly is much less.

The short of it is that I need to get the tendon put back together and it is anywhere from 4 to 8 weeks of non-use to allow it to heal. WTF? I’ve had a lot of non-use, downtime already this year and can hardly comprehend 2 months more. I’m in a little bit of denial right now, thinking that this all might work out. My finger sort of seems to work some, so I don’t really see how the tendon can be completely severed. If that was the case, then the finger shouldn’t work at all.

I hate to say it, but maybe, just maybe I was starting to finally feel like I had some form. I know my results from last weekend didn’t reflect it, but I went out and rode 20 miles on the evening ride, after the whole deal at the ER, and felt a ton better than I have in weeks. Plus, when I got home I did situps, 75 straight, without straining the least bit. That is sort of a test I do. If I can do over 50 situps with ease, then my riding usually starts going good. I know it sounds screwy, but it is always the case.

Okay, the day could have been worse. I could have cut my finger off completely. Or my hand, so that is the upside. But, shit, this wasn’t what I needed just right now. My right arm is working so pitifully, I’ve become pretty reliant on my left arm. I’m nearly ambidextrous at this point. Now, I’m back at square one it seems. I can’t put on my socks, or reach into my jersey pocket or a million other common things.

I know I shouldn’t mess around much with this. My finger and using it is much more important than a few bike races. I had a huge antibiotic injection into my butt and am eating more for the next week. So, I assume I’m going to be riding like hell pretty soon. Not that I was riding much better before. Maybe I’d better be shopping for a new pair of hiking boots for this summer. It looks right now like bike racing might be just wishful thinking for a while. 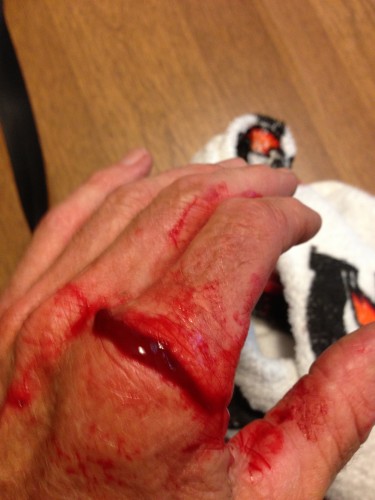 Trying to get a good look at the wound was an issue with all the blood. 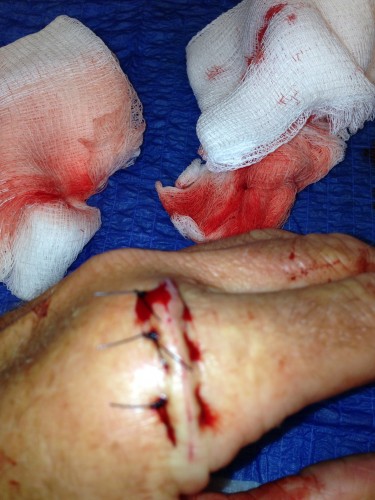 After repair, it started swelling up pretty big. 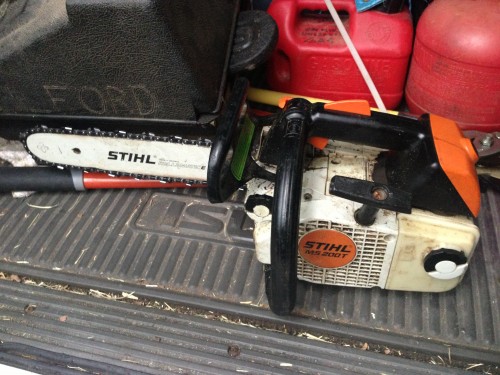 It’s such a little baby saw, but it packs a big bite. 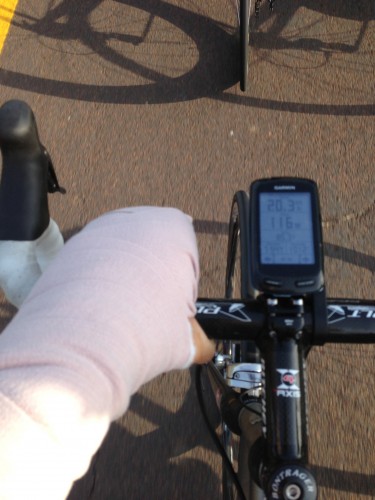 I turned around after 12 miles riding because my hand started throbbing to my heart beat. 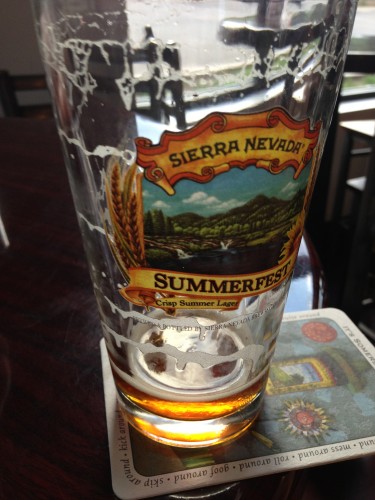 So, I rode over to PT’s/The Flying Monkey and drank some beer. 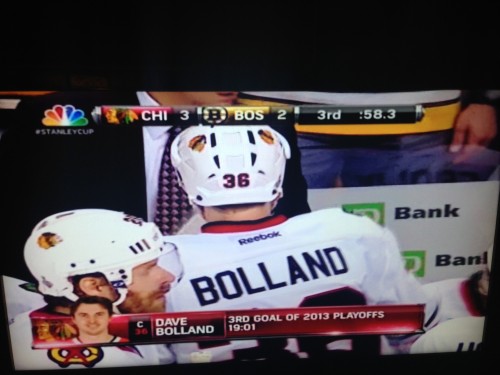 It was nice that the Blackhawks won the Stanley Cup though. Pretty crazy finish, with 2 goals in 17 seconds at then end.

18 thoughts on “I Screwed Up – Severed a Tendon”