I was talking to my buddy Ian after Tulsa Tough about his races. He was racing the 1-2 race, not the Pro 1 race. He finished the races, well, he crashed the first one, like tons of other people did in all the races, but he finished the last two. He was having a super hard time staying in good position. He’d move up to the front and pretty quickly get rotated back to the tail end.

He hasn’t been racing that long and with the field limit of 125 riders full, it was a pretty intimidating task. I started trying to explain the process of moving up to the front of the pack and trying to stay there throughout the event.

I’d say the main issue with criterium racing at night is the shadows. It really depends upon the lighting, but whatever the lighting is, there are always shadows moving around, and more importantly, across you. It gives you the impression that the rider next to you is moving over on you, crossing your wheel. It takes a bit to get used to. Some riders never do.

Bike racing in a pack is inherently dangerous, somewhat. You are, at many times, not in control of your ability to be safe. You have to understand that before you first clip in when the gun goes off. It is a given. You put yourself in many situations during a criterium, that you are at the mercy of the other riders.

A pack of bicycle riders are like a school of fish. When someone makes a move, they only way the equation works is when everyone following, responds and makes an according move. When your front wheel is overlapped with the rider’s rear wheel in front of you, you have to pretty much go where they go. Either that, or back out and not be overlapped. Those or the two choices. The only choices.

You don’t have the choice to put your hand on the guy’s in front of you hip, and stop him from moving over. That stops the “fish schooling” movement of the field and can cause chaos. That’s not usually the case with this head butting. That is just to move one guy away from what you consider your position. I’d say the hand on the hip deal is more dangerous than headbutting. Many time nowadays, people will either tap you on your hip or just put their hand there, telling you that they are there. The deal is, they really don’t need to. They should be comfortable where they are or back out and not be overlapped. Those were the only original choices.

But, believing in the abilities of your competition is key to this whole thing. You have to have confidence that the riders in front of you are looking our for themselves, thus you somewhat. And that they have the capabilities to be able to do just that.

Friday night’s race at the Blue Dome Criterium, it was pretty sketchy. There were a lot of guys falling for, what seemed, like no reason. Good riders, well riders wearing jerseys of good teams, just falling by themselves turning a corner. The corner that was claiming the most victims seemed to be the 2nd corner of the race. It was a left hand, 90 degree corner. It is a little off camber when you got wide. I think that must have been the issue. Historically, I’ve used the outside line on this corner to make big moves towards the end of the race. In the past, you could go wide and stay wide through the next corner, heading up a small hill and pass a ton of guys. But, so many riders were sliding out there, I didn’t use that line the last 1/2 of the race. Being on the outside of the field on a corner, puts you in jeopardy of all the riders on your inside. And when someone seems to be falling on the corner every 5 laps, then it is a risk that didn’t make sense to me.

Saturday night’s race was safer. Many less crashes than the previous night. It was probably because everyone had done the same deal the night before, but also because the course flowed better. The field stayed pretty strung out the whole lap, other than right around the finish line when it wasn’t going fast. Then it bunched up, big time, and made the first corner kind of tricky. I started taking the outside line there nearly every lap. Many guys were missing that line and it was usually a way to not brake. That being said, the last two laps I got stuck on the inside and that was my undoing. I didn’t have enough fitness to absorb a big deceleration, acceleration on the last lap.

The last corner on Saturday’s race was super fast. Sometimes we would take it 6 abreast. You talk about trusting the guys around you, this was a corner for just that. Even guys diving the inside seemed to be doing alright. The race was safer than the previous night and the guys in the field could sense that. It made the racing more enjoyable.

Anyway, what I’m getting at here is that to be a good bike racer, you have to put fear behind you and rely on the abilities of your competition. It is nearly the only way to be really successful at the sport. And it’s the only way the sport works correctly. 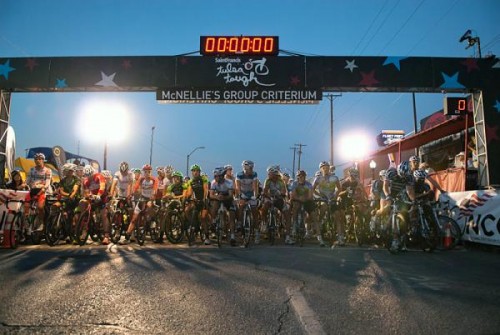 They had good lighting at the races in Tulsa, but there were all kinds of shadows. 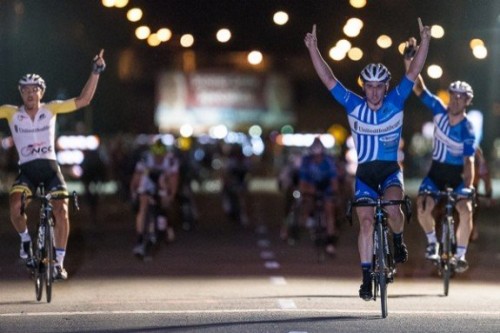 It didn’t seem to slow these guys down much. But, Hilton Clark was riding around all night on Saturday all ripped up. I guess someone did a 90 degree turn straight into him and he/they (?) fell. I am surprised I didn’t see it because he was ahead of me nearly the whole race.