I was thinking yesterday what ever happened to Johan Bruyneel and his appeal of the doping charges against him. Then today, at Cyclingnews, there is a short article with some of the answers. Johan says he can’t talk now that his lawyers have got a hold of the case. I hate it when people pull out that line. I’m assuming his story has changed a little too, now that the cycling public has had a chance to view the testimonies against him.

Somehow, it seems like the system is broken. Last year, they said that Johan would be facing his day by November 2012. Then it was changed a month and now it is 8 months later and I haven’t seen a word about any scheduled date. It isn’t like these guys, USADA, WADA, whoever, have a long line of doping cases waiting and he has to wait his turn.

At the end of the Cyclingnews article, there are a quote that makes it look like he is not feeling any contrition or regret for past dealings.

“If Armstrong had not come back and if I had included Landis in the squad again, all of this would never have happened. I am two hundred percent convinced of that. Without those two facts, we would be talking completely differently,” Bruyneel said.

I guess it’s the feeling badly that he was caught thing and not the I was in the wrong belief. That’s understandable. He had a very good thing going and probably believes that he was just another guy doing the same as all the others in the world of professional cycling. But when you reap the huge rewards, then the fall is more fatal it seems. Maybe not. I’m wondering if he could still work out a 6 month suspension and be back in circulation by early next year? Wouldn’t that be just grand. 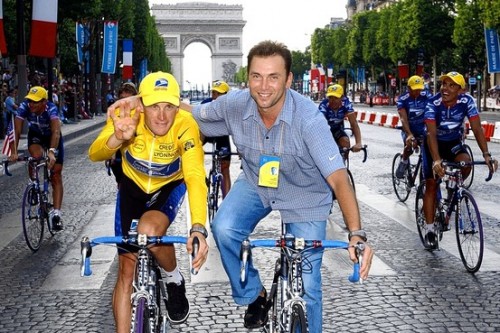 14 thoughts on “Was Wondering What Happened to Johan Bruyneel”